There are numerous cases of strangeness throughout history that have just sort of fallen through the cracks to be mostly forgotten. These are the accounts that have somehow managed to just sort of fade into the mists of time, and are not something you are likely to read about in the history books. Many of these even concern very famous and notable historic figures, yet these odd experiences are relegated to the shadows of history. One such case must certainly be the time the famous explorer Christopher Columbus supposedly saw UFOs and experienced weirdness as he made his way through the Bermuda Triangle.

The year was 1492, and Christopher Columbus and his crew were in uncharted waters, reaching out over unexplored horizons to penetrate into a new era, on their way to the eventual discovery of the new world. There were many strange and exciting discoveries to come, but before that a bizarre series of events would supposedly play out, beginning with a strange sighting made on the evening of September 15, 1492. The Diario of Christopher Columbus's First Voyage to America, written by the Spanish historian Bartolomé de las Casas describes how the crew witnessed a strange phenomenon in the sky, which is described as follows:

They sailed that day and night 27 leagues and a few more on their route west. And on this night, at the beginning of it, they saw a marvelous branch of fire fall from the sky into the sea, distant from them four or five leagues.

While this very well could have been a meteor, it seems curious that it was spectacular enough for them to make mention of it and emphasize it as a “branch of fire,” especially when they were likely to have witnessed many meteors in the sky during the voyage. Oddly, many interpretations of this sighting claim it as having been the opposite, and that the light was actually coming out of the ocean to shoot up into the sky. It is intriguing at the very least, but this was only one of several weird incidents they witnessed, according to Casas’ account. The following month, on October 11, 1492, the expedition was only hours away from their historic discovery of the Americas, and on this evening the Admiral spotted something very unusual on the horizon. It seemed to be a light bobbing up and down in the air, and it was odd enough that the Admiral called others to look upon it. Cases writes:

After sunset he [Columbus] steered on his former course to the west. They made about 12 miles each hour and, until two hours after midnight, made about 90 miles, which is twenty-two leagues and a half. And because the caravel Pinta was a better sailor and went ahead of the Admiral [Columbus] it found land and made the signals that the Admiral had ordered. A sailor named Rodrigo de Triana saw this land first, although the Admiral, at the tenth hour of the night, while he was on the sterncastle, saw a light, although it was something so faint that he did not wish to affirm that it was land. But he called Pero Gutierrez, the steward of the king's dais, and told him that there seemed to be a light, and for him to look: and thus he did and saw it.

He also told Rodrigo Sanchez de Segovia, whom the king and queen were sending as veedor [inspector] of the fleet, who saw nothing because he was not in a place where he could see it. After the Admiral said it, it was seen once or twice; and it was like a small wax candle that rose and lifted up, which to few seemed to be an indication of land. But the Admiral was certain that they were near land, because of which when they recited the Salve, which sailors in their own way are accustomed to recite and sing, all being present, the Admiral entreated and admonished them to keep a good lookout on the forecastle and to watch carefully for land; and that to the man who first told him that he saw land he would later give a silk jacket in addition to the other rewards that the sovereigns had promised, which were ten thousand maravedis [silver coins] as an annuity to whoever should see it first.

It was apparently seen by many witnesses on several of the ships, leaving us to ask what was this light? This was all surrounded by various compass oddities they had experienced during the voyage. In short, the compass reportedly was constantly going haywire without any discernible reason, to the point that it had become quite unsettling for the crew. In a 1792 manuscript called The American Geography, by Jedidiah Morse, it is written of this anomaly:

On the 14th of September he [Columbus] was astonished to find that the magnetic needle in their compass, did not point exactly to the polar star, but varied toward the west; and as they proceeded, this variation increased. This new phenomenon filled the companions of Columbus with terror. Nature itself seemed to have sustained a change; and the only guide they had left, to point them to a safe retreat from an unbounded and trackless ocean, was about to fail them. Columbus, with no less quickness than ingenuity, assigned a reason for this appearance, which, though it did not satisfy himself, seemed so plausible to them, that it dispelled their fears, or silenced their murmurs. 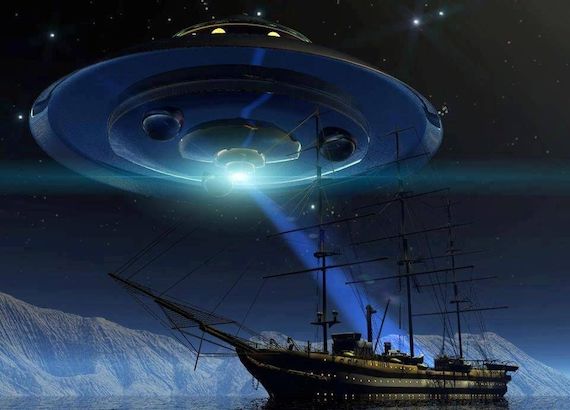 All of this has been taken in modern times as a sign that Columbus and his men saw UFOs, and that either these or their proximity to the Bermuda Triangle at the time caused the compasses to malfunction. The case was famously shown on The History Channel, and has generated quite a bit of discussion, but what are we really looking at here? One of the main problems with the reports is that, although they are often claimed as being from Christopher Columbus’ own diary, the fact is that there is no known actual copy of that diary remaining. It all comes from the work of Bartolomé de las Casas, which was a supposed copy of the original log and diary, and it is important to note that Casas never was actually on the voyage and wrote this 50 years after the fact. Since it is not the actual original, there is no way to know how much of it was really from Columbus’ own pen and how much was perhaps extrapolated or even exaggerated by Casas.

However, Casas was a well-respected historian not given to changing things around, and for the most part it seems that Columbus and his men saw something, but what? There have been many interpretations and ideas thrown around, including that he saw bioluminescent sea life, a meteor, some sort of atmospheric phenomenon, or even Natives with torches on a canoe, but the most popular theory is that they simply saw lights from land. The October sighting was made just hours before land was sighted, so it seems reasonable to suggest that it might have been lights from the Natives on shore. Even Casas thought this, writing:

I feel about this is that the Indians at night throughout these islands, as they are temperate without any cold, go out or used to go out from their straw houses that they call bohíos at night to comply with their natural necessities and take in hand a firebrand, or small torch, or a chink of pine or of another very dry and resinous wood which burns like a torch, when it is dark night, and with which they guide themselves back again, and in the manner could be seen the light which Christopher Columbus and the others saw the light three or four times.

In the end there is no way to really know for sure what happened here. We are left with a second hand copy of the original journal and no way of really verifying any of it. Was this UFOs, Natives with torches, or what? It is all a curious little footnote in the history of Christopher Columbus, and likely will remain a mostly forgotten curiosity and historical oddity that will never be fully solved.