There have been plenty of dark things that have gone on beyond the public eye, carried out in the shadows by the military. Biowarfare, chemical weapons, other lesser defined experiments. Many people are blissfully unaware of this going on, these things the background, confined to the realm of secret bases and dank underground laboratories, but every once in a while something happens that pushes this to the front and out of the shadows. One such incident is the time that thousands of sheep dropped dead near a government test area without explanation, and it is still a mystery that has not been fully brought into the light.

In the early morning hours of March 14, 1968, ranchers coming in to work on their property in the rural hills of Skull Valley, Utah, in the United States were in for a rather grim and surreal surprise. There covering a vast swath of land were the corpses of thousands and thousands of sheep, just lumps and specks of motionless white as far as the eye could see in a nightmarish landscape of death. Among the dead animals were a few sheep that wandered about in a daze and in a stilted, uncoordinated manner like zombies, obviously very sick. The dead and dying sheep were absolutely everywhere, and the few that were still alive either died soon after or were euthanized, leaving the ranchers and vets perplexed as to how this could have happened. What could just cause an estimated six thousand sheep to drop dead overnight? No one had a clue, but it did not take long for attention to focus on a site that was located just 27 miles away, and which had long been surrounded by ominous secrecy. 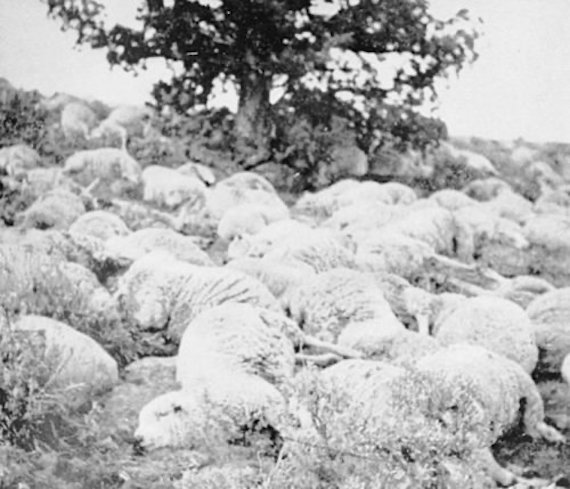 There just over the horizon and only 80 miles away from the urban area of Salt Lake City lies the notorious military installation called the Dugway Proving Grounds. Established in the 1940s and covering a vast area of over 800,000 acres of desert wasteland, the Dugway Proving Grounds just happens to be the Army’s largest base for chemical and biological weapons testing, composed of numerous laboratories, bunkers, storage facilities, target ranges, and dispersal grounds, and is home to the Army Chemical, Biological, and Radiological Weapons School. Here at the highly secretive testing grounds the Army engages in all manner of research and testing into various biological and toxic agents, as well as ways of dispersing them upon an enemy, involving open air tests of these materials and nerve agents, and the testing of other hazardous weapons, such as dirty bombs and furnace heating of nuclear material to simulate the dispersal of fallout in the case of meltdown. With 6,000 sheep suddenly dead it was almost a certainty that blame would be placed here, and it was.

For its part, the government was quick to deny having had anything to do with it. According to them there had been no tests in the area that could have accounted for such a mass die-off of sheep, but further pressure from an increasingly nervous public began to squeeze out some information. Soon the Pentagon was changing its story, and now admitted that on the very day before the sheep incident it had indeed carried out three seperate open-air tests in the region, but even then, they were quick to distance it from the dead sheep. According to the military, on March 13, 1968 three tests had been carried out, one of an empty artillery shell designed to hold chemical weapons, and another that involved burning nerve agents in an open air pit, but it is the third test that raised the most concern.

This test involved an A-4 Skyhawk attack aircraft spraying the very deadly nerve agent VX. For those who don’t know, the VX stands for “venomous agent X,” originally discovered by accident as a pesticide called Amiton, it was further engineered to be a weapon when it was discovered just how volatile and dangerous it was. In form it is a tasteless, odorless liquid and an extremely potent nerve agent that works by disrupting neural signals to the muscles, causing all manner of physical symptoms including twitching, drooling, excessive sweating, seizures, muscle spasms, and complete paralysis of the respiratory system and death in humans in concentrations as low as less than 10 milligrams when absorbed through direct contact or the inhalation of droplets. It is so potent and lethal, in fact, that it is three times deadlier than sarin gas, and is currently designated as a weapon of mass destruction and banned by the Chemical Weapons Convention of 1993. This is what that plane was spraying into the air over a remote area of desert badlands near the Dugway Proving Grounds on that day, but according to the Army this had all been a carefully planned and executed test. They had conducted it after careful calculations of the dispersal rate and wind speeds, and had also conducted the test on the other side of the mountain from Skull Valley, far from human habitation. After the test was completed, the military claimed that they were able to account for 98% of the spent payload of VX gas through the use of “droplet cards,” which caught the agent on its way down. According to the Army, there was no way that their test could have caused the sheep deaths, but of course others were not so sure.

The main contention with the official denial was that the Army almost as an after thought mentioned that one of the VX cannisters had not been completely spent, and due to a malfunction may have continued to stream the gas out at a higher altitude as the plane rose. This could have theoretically caused it to disperse over the area of Skull Valley, but even as this was being considered there were problems with that theory as well. The most glaring was that only sheep had been affected in this one confined area. There were no other dead animals such as cows, horses, dogs, rabbits, or birds, and the many other wildlife in the area, and no humans in the area had been sickened, which was odd. If this was VX, then everything should have been affected equally, right? Also strange was that many of the sick sheep just didn’t show classic symptoms of nerve agent poisoning, in that they had normal breathing patterns but rather showed internal hemorrhaging and refused to eat. Indeed, when some of Dugway’s scientists actually tried to recreate the poisoning using VX gas on sheep to recreate the incident, the animals had wildly different symptoms. Nevertheless, veterinarians claimed that traces of VX gas had indeed been found in the tissue of the dead animals, and the National Communicable Disease Center in Atlanta found evidence of the deadly gas in the water and soil of the area, so what was going on here?

The military never did release a full report to the public, although it did agree to pay out a large sum of money to the ranchers that had been affected, for many an admission of guilt. Despite denials that they were to blame, the incident was largely viewed as the fault of the Dugway Proving Grounds, and led to much debate on the use and testing of chemical warfare agents, many of which in the case of this facility were defying the rules set out by the 1925 Geneva Protocol, which the U.S. had never signed. This had largely gone under the radar of the average American citizen up to that point, but was thrust right into the spotlight with the Skull Valley Sheep Incident, and it ignited a firestorm of debate on the issue. Indeed, many policies were changed in response, and it helped propel President Richard Nixon's decision to ban all open-air chemical weapon testing in 1969. Luckily for the Dugway Proving Grounds, considering that the Army was a major employer in the region there did not seem to be much local interest by the populace in demanding an in-depth, long-term investigation, and the incident was amazingly sort of swept under the carpet.

Even in 1998, when new, declassified information was provided giving basically documented admission that the incident was caused by a nerve agent, as well as evidence that some ranchers and their families had actually shown symptoms of low-level exposure, the Army was trying to distance itself from the whole affair. Indeed, they have right up to the present officially refused to take responsibility for the Skull Valley incident, and continue to deny fault. There are plenty who agree that it seems odd that a cloud of VX gas should find its way over a mountain to affect one small area 30 miles away and kill only sheep in Skull Valley and nowhere else. It is so strange, in fact, that alternate theories have been proposed over the years, such as that this was some other agent or that it was the ranchers themselves using an illegal organo-phosphate chemical herbicide that had unintended effects, but it is all so opaque and murky that we will probably never know exactly what happened here. What killed those sheep on that day? What is the government hiding, and what other things are going on like this that we don't even know about? The mystery remains.

Who is Artemis and What Are the Artemis Accords?