In an article titled "The Sinister Story of the Hexham Heads," there are the following words at the Masquerade Podcast: "One February afternoon in 1972, 11-year-old Colin Robson was playing in his garden at the family home of 3 Rede Avenue, Hexham. He was having a go at weeding when he looked down at a lump in the ground that appeared to be a large stone approximately the size of a tennis ball. As he looked closer, he saw that there appeared to be a conical protrusion on one side of the object. Clearing away the grass and earth around it, he reached down to pick it up, and he saw that it appeared to have human features on it, like a face. The young boy was filled with excitement at his unusual find and he shouted for his brother Leslie to come and see what he had discovered. Leslie was astonished at his brother’s discovery and not to be outdone, he frantically started to dig the ground. It was not long before Leslie too had found a second strange head."

Neil Boothman reveals what happened next: "Several nights after the discovery of the stone heads, neighbour Ellen Dodd and her daughter were sitting up late one evening when both of them witnessed a “half-man, half beast” entering the bedroom. The pair screamed in terror but, the creature seemed indifferent to them and simply left the room, heard to be “padding down the stairs as if on its hind legs.” Later on, the front door was found open. It has been thought that the creature had been in search of something, and had left the house to continue searching elsewhere." 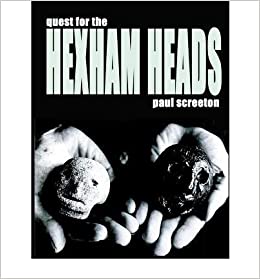 The story of the Hexham Heads is a very strange one. It encompasses ancient history, old English folklore, a strange beast, and much more. Back in 2012, I wrote a review here at Mysterious Universe of Paul Screeton's definitive book on the subject. Its title: Quest for the Hexham Heads. I noted in my review that Paul had "...done the field of Forteana a great service by finally getting to the truth – as much as one can – on a classic case that, when it comes to the paranormal, contains a bit of just about everything. And, leading the pack of course, are those heads, still enigmatic and still provoking anxiety, interest, fascination and even a fair degree of fear and trepidation four decades down the line…"

There's a reason why I mention this: I had my own encounter with a creepy, stone, carved head. It all goes back to 2007. It starts as follows: Paradise is a small Texas city, situated not too far from the sprawling city of Fort Worth, and is dominated by isolated homes, thick and somewhat mysterious woods, huge fields, numerous cows, and not much more at all. Aside, that is, from a killer-werewolf. Dawn had just broken on a particular day in September 1996, and "Walter," a rancher who then made Paradise his home, headed out to tend his cows, which had the run of a large field at the back of his property. Walter was not expecting to find the horrifying scene upon which he stumbled: one of his most valuable cows had been killed under cover of darkness. And, by the looks of the cow, the killer had been some sort of vicious, powerful creature that surely had no place prowling the fields of Paradise. The cow was disemboweled, with its throat ripped out and both back legs completely gone.

Although Walter wasted no time in contacting the police, this turned out to be an utterly fruitless task, since the only thing the responding officers could suggest to the irate and worried rancher was that perhaps a big cat was responsible and was still on the loose. And, while this was certainly a major cause for alarm and a matter they would most definitely look into, it what not, technically speaking, a crime that required the attention of the police. So, a wholly dissatisfied Walter decided to take matters into his own hands and elected to embark upon night-time vigils, in the hope that the beast might return and he, Walter, would have the opportunity to blow the creature’s head clean off its shoulders, and put an end to the matter before it risked spiraling wildly out of control.

Thus it was that at roughly 2:00 a.m. four days later, and while dutifully scanning the field with a night-scope that was attached to his high-powered gun, Walter became frozen with fear when he caught sight of a large, hairy, upright figure striding across the field. Around seven feet in height, very muscular and dark, it had the body of a man, yet the face, the ears and the muzzle of what looked like a large German shepherd dog or a wild wolf. Rooted to the spot, Walter didn’t even think to fire his gun. Rather, he simply watched, dumbstruck with fear, as the beast covered the width of the field very quickly and vanished into the trees that bordered his property. Rather ominously, only a short time later, and in the same exact spot where he first noticed the diabolical wolf-man, Walter found in the grass the small, stone, carved head of a fanged monster with slits for eyes and flared nostrils. Walter quickly became convinced that occultists had been secretly at work his field, engaged in some sinister act, and had quite literally invoked the beast from another realm of existence.

When Walter related the extraordinary tale to me, high up on his list of priorities was to finally get rid of the unsettling carved head. A mightily relieved Walter was more than happy to give me the head. But, there was something very odd and disturbing about the head. When it was held up to the light, or when placed in a shadowy environment, its appearance seemed to change slightly – sometimes to a maniacal glare, and occasionally to what resembled a cruel sneer. There’s absolutely no doubt that it was all just due to the light and the shadows – the head was not literally changing form. But, the fact that the shadows seemed to ensure the face took on such specifically gruesome appearances seemed beyond chance.

It was almost as if someone had ingeniously, skillfully, and deliberately, fashioned the head in such a way that its appearance had the ability to seem to change – radically so, even. On one night, and while a storm was at its height, I was taking pictures of the head for a friend in the U.K., when a tree limb crashed down on the south-side of the yard of my then-home. Significant damage was done to the fence. Of course, things like that happen all of the time. It didn't end there, though. A friend of mine borrowed the carved head to show it to his wife and, in the process of getting it out of his car, slipped on his front yard and broke an ankle. Another piece of bad luck and nothing else? Sure, that could have been the case. I'm sure dozens of ankles get broken everyday around the world. Probably hundreds. I wasn't quite so sure that was all to it, however. I'm still not...

You can see the carved head itself at this link at my blog. As to where it is now, that's a story for another day; a day that will come around soon.