During the coronavirus shutdown there’s a lot of binge-watching being done, affording those who’ve never been able to it before watch all of the episodes of their favorite television programs or for those too young to have seen them the first time around to be introduced to some classics. The Museum of Binge-Worthy TV Shows ought to have a special wing for the various Star Trek series and this writer is one who has visited that wing regularly and recently saw (for the umpteenth time) “The Tholian Web," the ninth episode of the third season of the original Star Trek. That could be why an article caught my eye shortly after comparing Elon Musk’s ever-growing network of small communications satellites to the Tholian Web.

The article (you can read it here in Soul:Ask) starts with the conspiracy theories that Elon Musk is in cahoots with the Pentagon, that the idea of a Starlink network of 12,000 satellites providing worldwide Internet links is just a cover-up (a “Trojan horse”), that the satellites will actually be able to connect to each other via lasers to create a web around the globe and that the lines of satellites clearly visible in the night skies around the world have already begun to cross paths like the Thorian web around the Enterprise and that the purpose of the two is the same – imprisonment of everyone inside. Whoa! 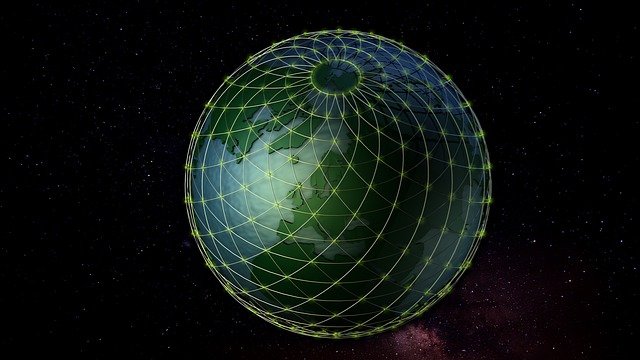 OK, those dots are much farther apart than the lines of Starlink satellites in the sky, and there’s no evidence that these small satellites have any more powers than Internet communications. However, the map of the 12,000 satellites (on up to 30,000 or more) does form a grid pattern around the Earth. And we’ve already seen many instances of equipment and events on Star Trek becoming reality. Could Gene Roddenberry have been predicting/warning about just such a space chain-link fence? Let’s take a look at The Tholian Web plot and see if there are any signs.

The USS Enterprise enters uncharted space (as always) searching for her sister ship, the USS Defiant. The Defiant is found adrift, and Captain Kirk, First Officer Spock, Chief Medical Officer Dr. McCoy, and Navigator Ensign Chekov transport to it wearing environmental suits for protection – sounds an awful lot like what’s going on around the world right now, doesn’t it? It appears the Defiant crew killed each other (panic caused by an invisible enemy?), but what’s worse is that the entire ship appears to be fading away (like out jobs?). due to equipment malfuntions (like the ventilators?), the group barely makes it back, but Kirk doesn’t and he and the Defiant vanish.

Spock determines that the local space is experiencing periods of "interphase" where two parallel dimensions touch each other and they just need to wait until it happens again. While waiting, the Enterprise is attacked by the Tholians (Iranians?) for violating their space and two Tholian ships commence building a Tholian web around the Enterprise (Starlink will imprison Earth with the U.S. and the Pentagon in control?). Uhura and Scott have visions of Kirk in his environmental suit telling them to hurry (leakers?). However, other crew members are showing signs of insanity from being infected by the Tholian space (coronavirus?). (Spoiler alert!) In the nick of time, Dr. McCoy develops an antidote (antidote!!), Spock finds Kirk and beams him aboard just as his oxygen runs out (the ventilator again?) and slips through the last tiny unfinished hole in the web.

Whoa! Roddenberry and his writers predicted the Starlink web AND the coronavirus epidemic. Or did they?

That little fun exercise is the same process people go through when linking the prophecies of Nostradamus to current events – look at events after they happen for similarities. No one who’s watched The Tholian Web dozens of times could have predicted it was going to happen in 2020 … and it didn’t really happen. Starlink is a looooong way from a Tholian web prison, and Dr. McCoy always seemed to find an antidote for whatever was ailing the crew. The hazmat suit is definitely a twist you don’t see often on Star Trek, but we have seen them for years in many situations. Equipment failures and lack of oxygen are happening now and they’re killing people, just like Kirk’s dilemma, but was that really a prediction or a coincidence?

It might be fun to try and link some other Star Trek episodes to world events. On the other hand, most of us would prefer that the coronavirus, the lockdown and the binge-watching were over and we could all boldly go back to that comfortable charted space known as work.