Elongated Skulls and the Fall of the Roman Empire

The elongated skulls of the Paracas region of Peru may get all of the attention because of long-rumored and since disproven theories that they belonged to extraterrestrials, but the practice went on in many parts of the world far earlier, far longer and far mor frequently than it did in South America. A recent study of 51 elongated skulls found in a single ancient cemetery in Hungary links them to the fall of the Roman Empire. Were they a cause or a result … and how did they keep those laurel wreaths on them?

As the new study, published in the journal PLOS ONE, explains, the 96 graves belonged to three burial groups of 28, 48 and 20 individuals. Each group was defined by a specific method of cemetery burial, with the largest being the most organized in multiple rows. That group contained the first and largest number of elongated skulls as well as the first appearance of foreigners, indicating to co-authors István Koncz and Tivadar Vida from the Eötvös Loránd University that they probably introduced both practices (organized burial and skull binding) to what was fast becoming the last of the members of the once-mighty Roman Empire. In fact, the cemetery’s use from 430 CE to 470 CE coincides with the arrival of the Huns and the abandonment by the Romans. (Photos here.) 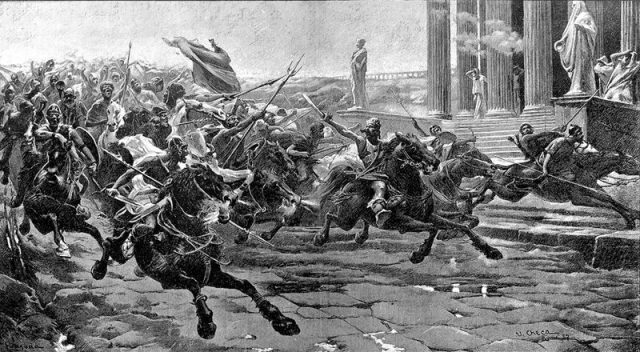 “All datasets attest to a remarkably heterogeneous community. Especially the strontium isotope ratios were considerably more variable than at prehistoric sites in the geologically homogeneous Carpathian Basin. They indicate that most of the adult population changed their places of residency at least once in life.”

Humans ingest strontium and it stays in their bones, which allows archeologists to determine where they’ve lived based on local crops and animals. This group was unusual in a number of ways, not the least of which was in the cultural and origin diversity that seemed to have melded almost immediately among these people from other regions. The elongated skulls didn’t appear to have disturbed anyone, nor does look like they were given any preferential treatment, at least in their burials. However, those who practiced it may have unknowingly grown a crop that allowed their modified skulls to stay strong.

“The data distribution within the burial community suggests that individuals with non-modified skulls and those who were buried in brick-lined graves consumed less millet than those with artificial skull deformations, the supposedly incoming group with non-local traditions. This observation supports the postulated influence from the Eurasian steppes and relocation of people with shared cultural background and dietary habits.”

As Ancient Origins points out, millet – a small-seeded grain common to arid regions of Asia and Africa – contains high levels of protein, fiber and antioxidants, which would contribute to their skulls and bones being stronger and muscles larger, making them both better warriors and farmers. Unfortunately, ancient Hungary is not ancient Asia, so that millet didn’t grow as well. Could this be what the stronger long-heads decided to assimilate rather than dominate?

As always, more research is needed. However, it’s nice to find a place where immigrants, refugees and people who look strikingly different and have unusual cultural practices can get along and become one new culture. What a concept.