Giant Monsters of the Oceans and Seas

Sea Monsters Unmasked is a book that was written by Henry Lee and published in 1883. It wasn't just sea serpents that fascinated Lee, however. It was also tales of giant squid, massive octopus, and gigantic turtles - among others. One of Lee's most intriguing stories began as follows: "I have recently had an opportunity of inspecting a most curious Japanese book, in the possession of my friend Mr. W. B. Tegetmeier, which is chiefly devoted to the representations of the fisheries and fish-curing processes of the country. It is in three volumes, and is entitled, Land and Sea Products, by Ki Kone. It is evidently ancient, for it is slightly worm-eaten, but the plates, each 12 inches by 8 inches, are full of vigour. Two of these illustrate in a very interesting manner the subject before us, and by the kindness of Mr. Tegetmeier I am able to give facsimiles of them, which appeared with an article by him on this book, in the Field of March 14th, 1874." 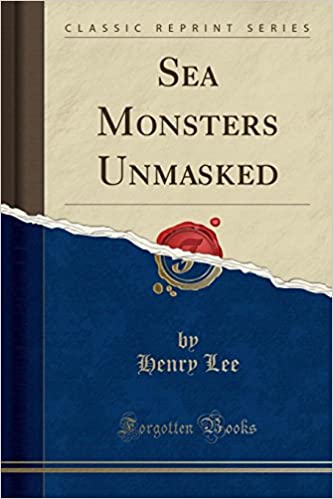 Lee continued with the story: "It represents a fisherman in a boat out at sea: a gigantic octopus has thrown one of its arms over the side of the boat; the man, who is alone, has started forward from the stern of the boat, and has succeeded, by means of a large knife attached to a long handle, in lopping off the dangerous limb of his enemy. As Mr. Tegetmeier says, 'From the extreme matter of fact manner in which all these engravings are made, and the total absence of exaggeration in any other representation, I cannot but regard the relative sizes of the man, the boat, and the octopus, as correctly given, in which case we have evidence of the existence of gigantic cephalopods in Japanese waters."

Lee had more to say: "The only doubt I have is whether the fisherman correctly described his assailant as an octopus, and whether it was not a calamary. [There] is a vivid picture of a fishmonger’s shop in a market, under the awning of which may be seen two arms of a gigantic cuttle hung up for sale as food. These are evidently of most unusual size, judging from the action of the lookers on; the one to the left, with a tall stand or case on his back, like a Parisian cocoa-vendor, is holding out his hand in mute astonishment; whilst the attention of the smaller personage in the right-hand corner is directed to the suspended arms of the cuttle by the man nearest to him, who is pointing to them with upraised hand. In another plate in this most interesting work a Japanese mode of fishing for cuttles is delineated. A man in a boat is tossing crabs, one at a time, into the sea, and when a cuttle rises at the bait he spears it with a trident and tosses it into the boat." 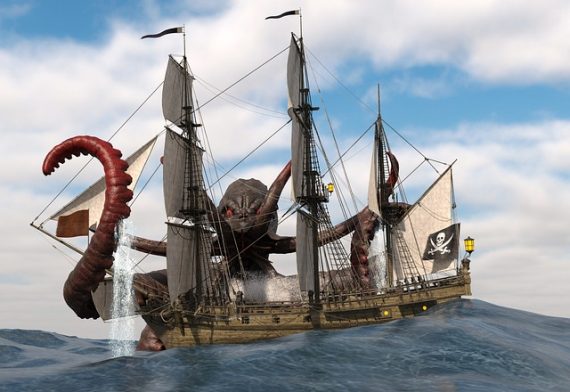 Although such reports were seen as incredible - and provided by credible seafarers, as Lee noted - there still remained a "...residuum of doubt in the minds of naturalists and the public concerning the existence of gigantic cuttles until, towards the close of the year 1873, two specimens were encountered on the coast of Newfoundland, and a portion of one and the whole of the other, were brought ashore, and preserved for examination by competent zoologists." Even though Henry Lee was someone who was skeptical of many of the accounts of water-based giants that came his way, he did believe that at least some such cases were genuine. He was not averse to the likelihood that at least some stories he secured were exaggerated - maybe to an extreme degree. Despite that, Lee left us with an incredible body of material that is as important now as it was then. Lee died in 1888.