For more than one hundred years, tales have circulated concerning a dangerous and potentially deadly beast that has made its water-based home in the heart of the Congo Basin in Central Africa. Its name: Mokele-Mbembe. It has a superficial resemblance to a brontosaurus; a herbivore that existed in the Jurassic period and that weighed up to sixteen tons and which could grow to a maximum length of approximately seventy-two-feel in length. Just like the rest of the dinosaurs, the Brontosaurus was violently taken out of circulation around sixty-five million years ago – possibly by a collision between the Earth and a massive comet, the result of which was worldwide chaos, massive flooding, and the plummeting of the hot temperatures that existed during that era and, as a result, the inevitable extinction of the dinosaurs. But, did they really die out? Is it possible that at least some of the massive monsters that existed in the distant past managed to survive? If so, could they still be with us to this very day? Could Mokele-Mbembe be one of those survivors? Such a scenario sounds unlikely. That's because it is unlikely!

In the English language, Mokele-Mbembe translates as "The one who stops the flow of rivers," which is a highly apt moniker for a creature of highly impressive proportions. Notably, Mokele-Mbembe is nowhere near the size that the Brontosaurus was millions of years ago: most witnesses describe it as being the size of an African elephant, at the very most. In 1909, Carl Hagenbeck’s autobiography was published. Its title: Beasts and Men. It’s in the pages of Hagenbeck’s book that he describes encounters with a large, unknown animal that was reputed to live in Rhodesia and that was "half elephant" and "half dragon."” A formidable monster, no doubt! Hagenbeck said: "“It can only be some kind of dinosaur, seemingly akin to the brontosaurus." The legend had well and truly begun. 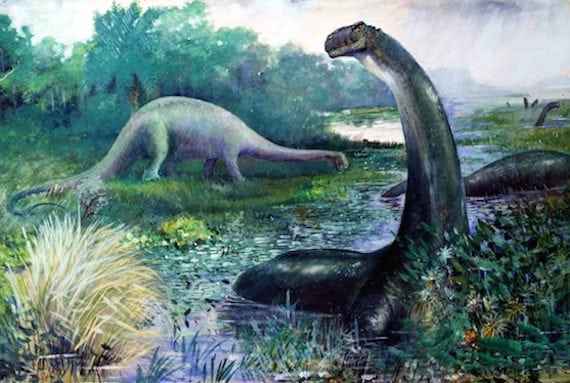 It’s interesting to note that this was not the only mysterious animal that was being discussed in this same time-frame – and in Africa, too. For example, there are the intriguing words of Paul Gratz, a German explorer who said in 1911: "The crocodile is found only in very isolated specimens in Lake Bangweulu, except in the mouths of the large rivers at the north. In the swamp lives the nsanga, much feared by the natives, a degenerate saurian which one might well confuse with the crocodile were it not that its skin has no scales and its toes are armed with claws. I did not succeed in shooting a nsanga, but on the island of Mbawala I came by some strips of its skin."

Now, we come to the matter of Captain Ludwig Freiherr von Stein zu Lausnitz, a German who had a passion for exploring and exotic animals. In 1913, in what is now the Republic of Cameroon, Lausnitz learned the following. In his very own words: "The animal is said to be of a brownish-gray color with a smooth skin, its size is approximately that of an elephant; at least that of a hippopotamus. It is said to have a long and very flexible neck and only one tooth but a very long one; some say it is a horn. A few spoke about a long, muscular tail like that of an alligator. Canoes coming near it are said to be doomed; the animal is said to attack the vessels at once and to kill the crews but without eating the bodies. The creature is said to live in the caves that have been washed out by the river in the clay of its shores at sharp bends. It is said to climb the shores even at daytime in search of food; its diet is said to be entirely vegetable."

So, are dinosaurs really living deep in the Congo? While the theory is an incredible one, it’s also one that is controversial in the extreme. With that said, is there another potential explanation? Yes, there is. It comes from a man who has traveled much of the world in search of monsters: Richard Freeman, a former keeper at Twycross Zoo, England. I had the good fortune to interview Freeman about his views on the Mokele-Mbembes and what they might be. Freeman told me: "An English ex-pat that gathered information on a supposed horned giant animal said to lurk in Lake Bangweulu [which is situated in the upper Congo River basin in Zambia], J.E. Hughes was born in Derbyshire in 1876 and attended Cambridge [University, England]. The British South Africa Company offered him a job as assistant native commissioner in the newly formed civil service of north-east Rhodesia. After seven years of service Hughes resigned and became a hunter / trader. He lived for the next eighteen years on the Mbawala islands on Lake Bangweulu. He recorded his life in a book, Eighteen years on Lake Bangweulu, in which he writes of the monster."

Let’s now see what Hughes had to say himself, when it came to the matter of monsters in Africa: "For many years now there has been a persistent rumor that a huge prehistoric animal was to be found in the waters of our Lake Bangweulu. Certainly the natives talk about such a beast and 'Chipekwe' or 'Chimpekwe,' is the name by which they call it. I find it is a fact that Herr Hagenbeck sent up an expedition in search of this animal, but none of them ever reached the Luapula, owing to fever, etc; they had come at the wrong time of year for newcomers. Mr. H. Croad, the retired magistrate, is inclined to think there is something to the legend. He told me one night, camped at the edge of a very deep small lake, he heard a tremendous splashing during the night." 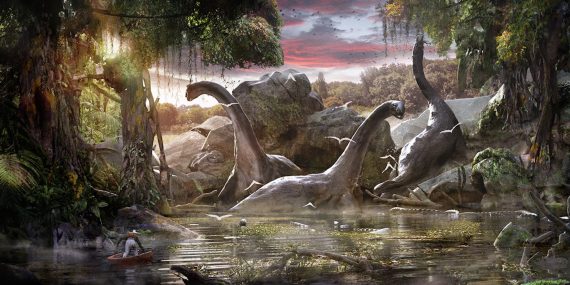 Now, let’s return to the words of monster-seeker Richard Freeman: "A picture is emerging of a huge, dangerous, semi-aquatic animal with a single horn and an antipathy towards hippos. Many have come to the conclusion that these are Ceratopsian dinosaurs. These were a sub-order of Ornithischia - bird hipped dinosaurs - and contained such well known horned dinosaurs as Triceratops and Styracosaurus. They were all herbivores and were typified by bearing horns and a bony frill like an Elizabethan ruff that grew from the rear of the skull to protect the animal’s neck. The number of horns varied between the species, some such as Monoclonius bore only one horn on the snout. There are two main stumbling blocks with the dinosaur theory. First and foremost there is no fossil evidence for any species of non-avian dinosaur surviving beyond the Cretaceous period (which ended 65 million years ago). Secondly there is no indication of any species of being aquatic, let alone Ceratopsians. So we need to look elsewhere for this beast’s identity."

On the matter of that identity, Freeman shares with us his views: “The idea of a water dwelling rhino may seem strange but the great Indian rhino (Rhinoceros unicornis) spends almost as much time in water as a hippopotamus. It feeds mainly on lush water plants such as reeds and water lilies. The Indian rhino also bares only one horn much like the Emela-ntouka and unlike the two Savannah dwelling African species who both bare two horns." A mystery solved? Well, it's definitely more likely than groups of Brontosaurus!