Mistaking One Monster-Beast For Another?

Live Science provides important information that demonstrates the differences between crocodiles and alligators: "Alligators have wider, U-shaped snouts, while crocodile front ends are more pointed and V-shaped…When their snouts are shut, crocodiles look like they're flashing a toothy grin, as the fourth tooth on each side of the lower jaw sticks up over the upper lip. For alligators, the upper jaw is wider than the lower one, so when they close their mouths, all their teeth are hidden…Crocodiles tend to live in saltwater habitats, while alligators hang out in freshwater marshes and lakes. They belong to the subgroup Eusuchia, which includes about 22 species divided into three families: the fish-eating gavials or gharials, which belong to the Gavialidae; today's crocodiles or the Crocodylidae; and the Alligatoridae, or alligators. Eusuchians appeared on the scene during the late Cretaceous some 100 million or so years ago." 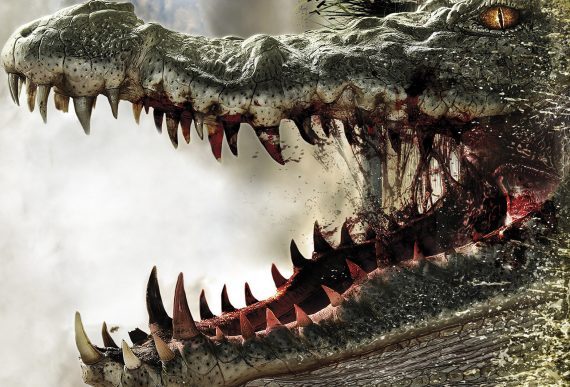 As for where they live, their names make that obvious: there is the American alligator and the Chinese alligator. And, what about the dimensions of these dangerous creatures? They can grow to absolutely fearsome sizes. As for crocodiles, they are widespread in the Americas, Asia, Australia, and Africa.  There's a reason why I mention all of the above. I occasionally ponder on the theory that at least some sightings of lake monsters might actually have been provoked by encounters of giant alligators and massive crocodiles. Our Planet reveals: "Five members of the Stokes family captured and killed a giant alligator at the Alabama River on August 16, 2014, which measured 15 feet and 9 inches long and weighed 1,011.5 pounds (~458.8 kg). Most sources pick this one as the largest alligator ever recorded."

Jurassic Dreams unleash even bigger monsters upon us: "Depending on who you ask, the answer is different. Unfortunately, giant prehistoric crocodiles' fossils aren't found complete, and only isolated parts of the skeleton and fragments form this puzzle. For the time being, we are sure about three species competing for the top on this peculiar ranking. Deinosuchus…lived 75 millions of years ago, at the end of the Cretaceous. It's important to note that actually it's not a crocodile, as its kin to the American alligators. It has a broad, robust mouth, which allowed this species turn on itself to dismember the meat of its preys, as today's crocodiles do. Based on its features, paleontologists assume it fed on land animals, dinosaurs. It stalked them from the water. Regarding its size, it went from 10 to 12 meters."  That’s formidable in the extreme!

There's also the controversial matter of Megalania, of which Dinopedia states: "Megalania was a large monitor lizard that lived in Australia during the Pleistocene Epoch, about 2.5 million years ago. The massive reptile was about 23 feet (7 meters) long, the size of a Saltwater Crocodile, the largest reptile alive today, making it the largest lizard that ever lived. It also had a venomous bite just like its relative, the Komodo Dragon."

The Australian Museum says of this immense monster – that moved as easily and effortlessly in swamps and lagoons as it did on land – that: "Megalania prisca, the largest terrestrial lizard known, was a giant goanna (monitor lizard). First described from the Darling Downs in Queensland by Sir Richard Owen in 1859, Megalania lived in a variety of eastern Australian Pleistocene habitats - open forests, woodlands and perhaps grasslands. Megalania would have been a formidable reptilian predator like its relative the Komodo Dragon of Indonesia, and may have eaten large mammals, snakes, other reptiles and birds." It's particularly intriguing to note there are rumors of isolated and rarely searched parts of Australia where Megalania still exists. That would be incredible - if it could be proved, of course. But, what if people  are mistakenly seeing not Megalania, but something like a surviving Deinosuchus? One monster being mistaken for another monster? Maybe so.