‘Egyptian Mummy Juice” sounds like a drink a bored bartender came up with during the pandemic shutdown (two parts Cairo vodka, 8 oz. molasses, crushed ice) but it’s actually one of the many descriptions of the mysterious black fluid found in the sarcophaguses found in a number of ancient Egyptian tombs. The British Museum, home of a number of mummies and a center for ancient Egyptian studies, has been researching black sarcophagus goo and finally determined its purpose and components –some of which opened a new can of slime.

“We discovered that the goo is made of a combination of plant oil, animal fat, tree resin, beeswax and bitumen – which is solid crude oil. The exact ingredients vary from one coffin to the next, but the goo was always made from some of these ingredients. It is possible there were other ingredients as well, that we can no longer detect, because they were volatile and evaporated, or have degraded to undetectable levels over the 3,000 years since the goo was applied.” 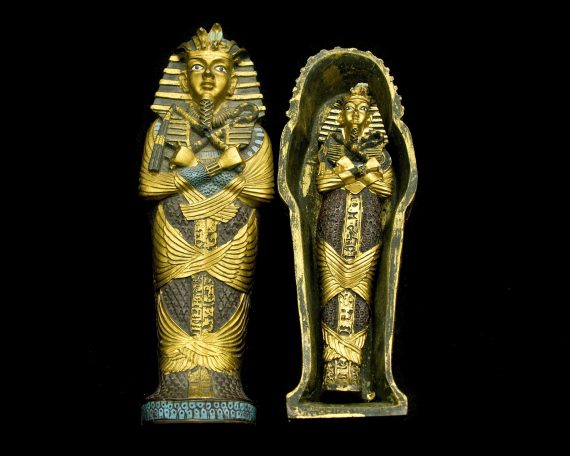 On the British Museum blog (with pictures of the mummies), Dr. Kate Fulcher describes the elements of her research into this mummy mucous, which got a burst of publicity in 2018 when a black sarcophagus was excavated in Egypt. Being tightly sealed with lime mortar, the slime inside was in liquid form – in fact, the remains of two men and a woman it contained were described as “swimming in it.” Eww … to everyone except Dr. Fulcher, who quickly obtained a sample and added it to her collection of over 100 from other coffins dating to the 22nd Dynasty in the Third Intermediate Period (c. 900–750 BCE), including that of Jedhonsiu-eff-ank, a temple priest whose sarcophagus appeared to have been covered with multiple layers of goo, convincing researchers that it was a cement and a sealant. died almost 3,000 years ago. He was a priest at the Temple of Amun in Karnak. They were all broken down and analyzed using gas chromatography.

“Some of the products we have identified only naturally occur outside of Egypt, indicating that these were imported.”

The resins came from pistachio trees in Israel and conifers in what is now Lebanon. The bitumen – a sticky, black, semi-solid glob of petroleum hydrocarbons (think asphalt or road tar) – had biomarkers indicating it was most likely from the Dead Sea, where the stuff floated to the surface for easy harvesting. This sticky black gunk is easy to imagine being perfect for sealing burial containers, but Dr. Fulcher reminds us of the three people floating in it. Why was it used indie the coffins as well?

“We can’t say for certain but, significantly, previous analyses of mummification balm (used on the bodies themselves) have shown it to be made of the same ingredients as the black goo that we have been studying on the outside of coffins and mummy cases. This means the black goo was being used at different points in the burial process – during the preparation of the dead body, and then again during the funeral, on top of the mummy case or coffin.”

Specifically, the black goo treatment seems to be tied to the god Osiris, who is associated with death and rebirth, and called ‘the black one’ because he’s often depicted with black skin and a mummified body. While coating the body in black goo sounds gross, it was actually a sign of respect and reserved for royals or rich citizens who could afford it.

If your kids are showing an interest in Egyptology, here’s one final bit from Dr. Fulcher that could get them really excited about a career in the field.

“There is more to be discovered! Most of the research so far has been into later examples of black goo, we hope that looking at examples from earlier times will tell us how the ingredients changed over time. We also hope to make some of the black goo ourselves to enable us to think more about how it was stored, transported and poured, what it smelt like, and how hot it had to be.”

A job where you get paid to make slime! How cool!

The Alien Autopsy Film: A Sci-Fi Show and Those Black Eyes