Those who are wondering what happened to North Korea’s Supreme Leader Kim Jong-un can rest assured … he didn’t leave Pyongyang to visit his relatives in the past or find out who wins the U.S. election in the future. Why would he do these things? According to North Korean tradition, Kim, his father and his grandfather possessed the ability to travel through time and space … well, they did until North Korea’s official state media issued the following statement:

“In fact, people can’t disappear and reappear by folding space.” 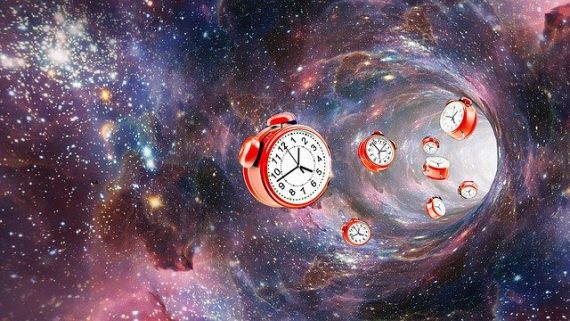 Wait ... what? Let’s get some background on this. Rodong Shinmun, the North Korean state media, is referring to ‘chukjibop’ – a Korean term meaning 'distance-shrinking magic' used to describe the ability to travel through time and space by folding them. That concept sounds similar to the idea of wormholes but is rooted in Asian mythology – the Chinese call it Qinggong while the Japanese refer to the power as Shukuchi. Qinggong is more familiar to martial arts fans – it also refers to those gravity defying flips, wall-climbing abilities and superhuman speeds seen in movies. Shukuchi, which means ‘shrink earth method’ also refers to martial arts moves where a fighter suddenly appears in an opponent’s space, but is rooted in the belief in the power of teleportation, particularly in Buddhism.

That’s interesting, but when did we ever see Kim Jong-un move fast?

Good question. To answer that, we have to go back (figuratively, of course) to Kim Il-sung – North Korea’s first Supreme Leader and Kim Jong-un’s grandfather. According to North Korean mythology, Kim Il-Sung used the power of chukjibop to win a battle against the imperial Japanese soldiers – possibly the 1937 Battle of Pochonbo which revealed the fervor of the Korean revolutionaries. After Kim Il-sung became Supreme Leader, the power was formalized and said to have been passed on to Second Supreme Leader Kim Jong-il, who made sure everyone knew it with the song “'General uses Chukjibeop.” It was assumed that the power of chukjibop was then passed to the next Supreme Leader, Kim Jong-un.

“We need to pay attention to the current leader’s denial of the mythification of his predecessors, including his criticism of them in October, at Mt. Kumgang.”

Radio Free Asia’s coverage of the Rodong Shinmun report quotes an unnamed ministry official who apparently was addressing reporters on behalf of the seemingly missing leader. A former South Korean official familiar with North Korean affairs of power speculates that Kim Jong-un is (or was) trying to move away from the deification of the leaders and trust in mythical powers and more towards practical solutions to problems. (Like nuclear warheads?)

“Idolization of the former leaders is important, but Chairman Kim showed his idea that everything should be based on reality.”

Those are the comments of Yoo Dong-ryul of the Korea Institute of Liberal Democracy about Kim Jong-un, who during his lifetime has claimed the abilities to:

That last one is an important power for someone with an alleged “Pleasure Squad” of 2,000 sex slaves. Is Kim really denouncing those powers … or is the North Korean government preparing its people who have believed him to be supernatural to accept that the reason he's been missing lately is not that he's in another time or space but that he’s sick, dying or already dead? A government that may want the world to see its practical, realistic side – not the belief in myths and fantasies of the past.

If North Korea can move quickly into 21st century technology and human rights, that would be a real (and welcome) example of time and space travel and chukjibop.