The Alarming Connection Between UFOs and Nukes

UFOs seem to have a habit of popping up just about anywhere. They have been seen by people from all walks of life and reported from all over the world from a variety of environments. In some cases, these accounts can be spookier than most, covering situations in which people's lives might be at risk or there might be a threat to national security, and in recent times this has been at the heart of some amount of debate and discussion. Surely one place where one would not want to really see UFOs or possibly alien presences loitering about is at sites that hold nuclear material or weapons, but for years this has been a pervasive, stubborn, and frightening trend.

Although UFOs have been reported in a wide range of situations and environments, some of the more unsettling are those that have appeared near or even directly over nuclear facilities. It sounds like something straight out of a science fiction story, but pretty much since the 1940s and the dawn of nuclear power and weapons there has been an unsettling number of UFO sightings in these places, ranging from nuclear power plants, to test areas for nuclear bombs, to following nuclear powered Navy craft, with the journalist and researcher George Knapp once saying of this phenomenon:

All of the nuclear facilities—Los Alamos, Livermore, Sandia, Savannah River—all had dramatic incidents where these unknown craft appeared over the facilities and nobody knew where they were from or what they were doing there. 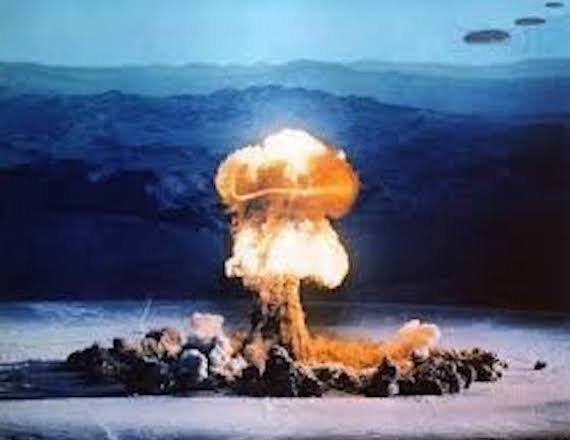 The list of incidents of UFOs over nuclear related sites is long. In the 1940s atomic laboratories in Los Alamos and Sandia, New Mexico, were constantly buzzed by what were called “green fireballs,” many of which were seen by top ranking officials and personnel at the sites. Los Alamos in particular was allegedly haunted by these objects and other strange aerial phenomena right up into the 50s, and atomic test sites of the era were also regularly visited by strange objects and lights in the sky, to the point that special teams were apparently set up just to monitor them. One place where they appeared regularly was the White Sands Missile range in New Mexico, where the Trinity, the world’s first atomic bomb, was tested on July 16, 1945, just a month before the bombing of Hiroshima, Japan. According to former Apollo 14 astronaut Edgar Mitchell, the weapons and other systems of the base were constantly shut down and made to go haywire by UFOs, and that even conventional missiles would be disrupted or even shot down by the mysterious craft. In Mitchell’s opinion, the UFOs were trying to force us to be peaceful, and has said:

White Sands was a testing ground for atomic weapons – and that's what the extraterrestrials were interested in. They wanted to know about our military capabilities. My own experience talking to people has made it clear the ETs had been attempting to keep us from going to war and help create peace on Earth.

It certainly wouldn’t be the last time this sort of thing happened. UFOs were sighted over several different nuclear weapons storage facilities in the 60s and 70s, including Malmstrom Air Force Base in Montana, where a very strange series of events unfolded. According to a former Air Force Capt. Robert Salas, in 1967 Malstrom was visited by a UFO that appeared as a bright red light measuring 30 feet in diameter, which approached to take up a position hovering right outside of the base’s front gate. As they went about trying to get a handle on what was going on, according to Salas 10 of the nuclear ICBM missiles kept on the base were simultaneously and inexplicably deactivated, only turning back on when the UFO went back off into the night. Salas would later say of this frightening development:

And just as I called my commander, our missiles began going into what’s called a no-go condition, or unlaunchable. Essentially, they were disabled while this object was still hovering over out site. They could have a lot more damage, permanent damage, to our weapons systems, and they didn’t. If they wanted to destroy them, with all the powers they seem to have, I think they could have done that job, so I personally don’t think this was a hostile intent.

The account was verified by another member of the personnel on the base at the time, a Minuteman missile targeting officer on Malmstrom Air Force Base by the name of Robert Jamison, who says he on several occasions had to "restart" these missiles, and it leads one to wonder just what was going on here. In December of 1980 we have another incident which played out near Royal Air Force base Bentwaters in England, which was said to house underground bunkers holding around 25 nuclear weapons at the time. According to former U.S. Col. Charles Halt, who was the deputy commander of the base at the time, on this evening strange lights began to be reported by excited personnel near the base, and he says that as he peered through the trees of the surrounding forest, he could see it too. He has described what he saw thusly:

All through the forest was a bright glowing object. The best way I can describe it, it looked like an eye – with bright red, with a dark center. It appeared to be winking. It was shedding something like molten metal, was dripping off it. It silently moved through the trees, avoiding any contact, it bobbed up and down, and at one point it actually approached us. We tried to get closer. It receded out into the field, beyond the forest, and silently exploded into five white objects – gone. So we went out into the field looking for any evidence, because something had been apparently falling off it – and we find nothing.

This was apparently far from the end, though. According to Halt, other objects appeared in the sky all around the base as well, including one that even seems to have shot an intense beam of light at the ground. This matched other reports of these concentrated beams being projected by other UFOs in the area, and rather unsettlingly many of these beams purportedly seemed to be directed at the underground nuclear bunkers. In the end, the American personnel decided not to do anything about it, because according to Halt, “it happened off base, so it’s a British affair.” It was still very harrowing, and Halt has said:

A laser-like beam landed 10-15 feet away from us. I was literally in shock. We could hear chatter on the radios that the beams went down into the weapons storage area. 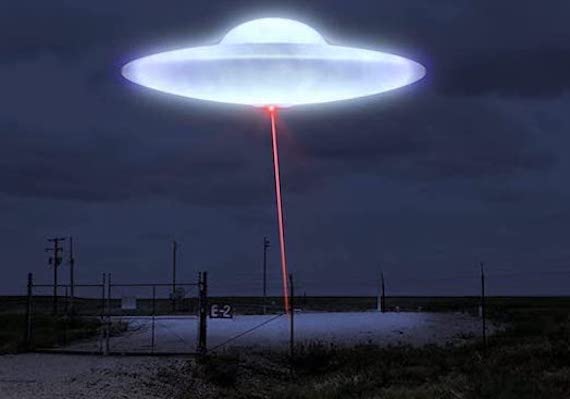 UFOs have been spotted around nuclear facilities around the world right up into the present, such as the now infamous USS Nimitz “tic-tac” UFOs that seemed to follow around a fleet including nuclear powered warships, and there are numerous other reports of UFOs lurking around myriad nuclear sites all over the place, from Russia to India and Pakistan. We are left with the question of why? Why are they so attracted to these places and keep coming back? Is it that they are aliens who are concerned about this technology, foreign powers using secret technology, or something else entirely? One UFO author and researcher by the name of Robert Hastings has written whole books on the phenomenon, such as UFOs and Nukes: Extraordinary Encounters at Nuclear Weapons Sites, and Accidental UFO Apocalypse, has interviewed hundreds of people employed at these facilities who have seen the phenomenon and experienced it for themselves, and he says:

I believe - these gentlemen believe - that this planet is being visited by beings from another world, who for whatever reason have taken an interest in the nuclear arms race which began at the end of World War II. Regarding the missile shutdown incidents, my opinion is that whoever are aboard these craft are sending a signal to both Washington and Moscow, among others, that we are playing with fire – that the possession and threatened use of nuclear weapons potentially threatens the human race and the integrity of the planetary environment. I don't think humankind is in jeopardy from whoever they are or whatever they are, except that we will have our minds expanded. There will be a paradigm shift. Traditional institutions such as religions, governments, other social institutions may be threatened by what is coming. That is just the logical consequence of what is about to occur.

It is all interesting to think about, but there are certain things that don’t seem to immediately line up. If these are aliens that want to control our nuclear development and brinksmanship, then where were they when Hiroshima and Nagasaki were bombed in the first and only aggressive use of nuclear weapons in our history? Why would they not intervene if this was their purpose, instead just hovering around freaking out the personnel of these bases? Was it just tough love to let us get a taste of what was in store if we ever pursued this at a larger scale? Indeed, why should they really care about us anyway? Or are they something more sinister, perhaps even a threat to national security? If so, why haven’t they made any move? Or is all of this just wild imaginings and misidentifications? George Knapp has said of this possibility:

In the end, what are we looking at here and why should these forces be drawn to our nuclear activities? Is it aliens, or something else? They certainly don't seem to be going away, so perhaps only time will tell, but it is all not a little disconcerting. Whatever they may be, let's hope they don't mean us any harm.