Football, or soccer to most North Americans, is perhaps to the surprise of many in the United States one of the most beloved and popular sports in the world. It is a game that has attracted much fanfare, heated rivalries, and is rabidly followed by millions of people from all corners of the globe. It is a very big sport, but is it possible that it is loved just as much by forces from beyond our understanding? Here we will look at the time a group of UFOs showed up at a game and caused quite a stir.

It was October 27, 1954, and an excited crowd of approximately 10,000 people was gathered at the famed Stadio Artemio Franchi stadium in Florence, Italy. Since opening in 1931, the stadium had been host to many momentous events throughout its history, including such historic football games as the World Cup quarter-final in 1934, the Spaghetti Bowl during World War II, and the football preliminaries for the 1960 Summer Olympics in Rome, and on this day it was the venue for an important match between the Fiorentina club and its neighborhood rivals, the Pistoiese club. It was a characteristically heated match, and the fans were going nuts, roaring in support of their respective teams, but then something very strange happened, indeed.

Just after halftime, with the home team ahead 6-2, the teams began playing again, but all at once the crowd went eerily quiet, the cheers and shouts dying down as the players paused and the ball rolled to a stop. All eyes were on the sky above, where a large, cigar shaped shaped object was flying about before stopping to hover there above the stadium, where by some accounts it was joined by several others. The objects moved fast and then just stopped there overhead with inscrutable purpose as the normally noisy stadium was enveloped in complete silence, the puzzled audience and players staring upward in awe. One of the witnesses would later say of the spectacle:

I remember clearly seeing this incredible sight. We were astonished we had never seen anything like it before. We were absolutely shocked. They were moving very fast and then they just stopped. It all lasted a couple of minutes. I would like to describe them as being like Cuban cigars. They just reminded me of Cuban cigars, in the way they looked. I think they were extra-terrestrial. That's what I believe, and there's no other explanation I can give myself.

The UFOs allegedly eerily hovered there for around 10 minutes, before suddenly ejecting some sort of silky, glittery substance into the air and then speeding off at high speeds. This gossamer substance then slowly drifted down over the stadium and covered the area. Oddly, whatever the material was, it then reportedly proceeded to sort of just evaporate and totally disintegrate upon contact, leaving behind no trace. Roberto Pinotti, the president of Italy's National UFO Centre, would explain that this was what is often called “Angel Hair” in UFO circles, and is a type of cobweb-like substance that is sometimes reported in conjunction with UFO sightings. He explains of this:

At the time the newspapers spoke of aliens from Mars. Of course, now we know that is not so - but we may conclude that it was an intelligent phenomenon, a technological phenomenon and a phenomenon that cannot be linked with anything we know on Earth. It is a fact that at the same time the UFOs were seen over Florence there was a strange, sticky substance falling from above. In English we call this 'angel hair'. The only problem is after a short period of time it disintegrates. No-one knows what this strange substance has to do with UFOs. 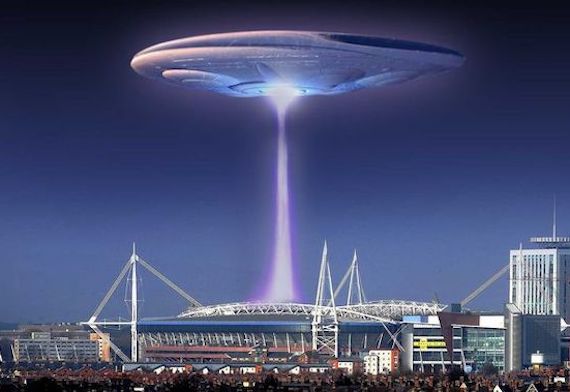 One journalist by the name of Giorgio Batini, with the Florentine newspaper La Nazione, was determined to get a sample of whatever this strange material was, and he was apparently successful when he found some trees near the stadium covered with the stuff. He was carefully able to collect some specimens and had them sent to the Institute of Chemical Analysis at the University of Florence. It was found that the substance contained boron, silicon, calcium and magnesium, but this was about all that could be discerned as the substance ended up just sort of evaporating away in short order. Some skeptics have pointed out that perhaps this is not a spider-web like material, but actual literal spider webs, spun by large gatherings of spiders. One astronomer James McGaha has said of this:

When I looked at this case originally, I thought perhaps it was a fireball, a very bright meteor breaking up in the atmosphere. They can be cigar-shaped with pieces breaking off. But it became fairly apparent that this was actually caused by young spiders spinning webs, very, very thin webs. The spiders use these webs as sails and they link together and you get a big glob of this stuff in the sky and the spiders ride on this to move between locations. They just fly on the wind and these things have been recorded at 14,000 feet above the ground. So, when the sunlight glistens off this, you get all kinds of visual effects. As some of this stuff breaks off and falls to the ground, this all seems magical of course. But I'm fairly confident that's what happened that day.

Of course, the spider theory has its problems. For instance, how does that explain the giant, cigar shaped UFOs that thousands of people witnessed over the stadium and also in the surrounding countryside? Then there is the chemical composition that was found in the samples that were brought in, which contained elements not found in spider silk, such as boron and silicon. Many of the witnesses also insist that it could not have been spiders and that the fluffy material was disgorged by those fast flying craft. Some things with the spider idea just don’t seem to fit, and the UFOlogist, Pinotti, does not mince words when he says, “Of course I know about the migrating spiders hypothesis - it's pure nonsense. It's an old story and also a stupid story.” Whatever was going on here, the people who were there insist that this was UFOs, and it makes one wonder why they were there and what that material could have possibly been. Were they here to watch humanity and study a large group setting? Were they attracted by the noise? Or do they, like many around the world, just like a good old football match?