The Fire-Eating Birds of India

One of the staple acts of so-called ‘freak shows’ were the fire-eaters – men (or very short-haired women) who placed flaming torches into their mouths and ‘ate’ the fire, thus extinguishing the flames. A variation on this theme, often performed by the same person, was the fire breather, who held the torch to his mouth and seemingly blew or spit flames into the air. Not quite a dragon, but close enough for freak show attendees disappointed by the Lizard Man and the Two-Headed Woman. While there are no fire-breathing animals, even of the cryptid kind, a recent study found an actual fire-eating, freak show-worthy bird in India – and this ‘talent’ may actually help it avoid extinction. Is the fire-breathing bird scary enough for its own Netflix series?

“… we show that species with a higher propensity to innovate are at a lower risk of global extinction and are more likely to have increasing or stable populations than less innovative birds. These results mainly reflect a higher tolerance of innovative species to habitat destruction, the main threat for birds.”

In a study published in the journal Nature, Ecology & Evolution, Louis Lefebvre, a professor at McGill University in Montreal and Simon Ducatez of Spain’s Center for Research on Ecology and Forestry Applications describe how they looked for examples of novel behaviors and feeding innovations in birds and then compared the number of sightings in each species with their risk of extinction. Despite having to peck through 204 ornithological journals, these sightings jumped out because bird watchers like to report unusual behaviors. This was coupled with personal observations by the co-authors of wild-caught birds. The goal was to find birds adapting their behavior to their ever-changing environment – especially where their natural habitat is under development or the birds have more human-provided food available than natural insects and seeds.

“Some of the reported innovations were subtle, with seed-eaters like Northern cardinals feasting on nectar from nonnative garden plants. Others were more remarkable: cormorants in New Zealand using the strong currents left in the wake of ships to go fishing, green herons deploying bread crumbs as bait to catch fish, great blue herons hunting squirrels on golf courses and — famously — gulls stealing bags of chips.”

A New York Times interview revealed some of the more unusual survivalist behaviors among birds. However, none were quite as dramatic is the fire-eating rufous treepies of India. Rufous treepies (Dendrocitta vagabunda ) are long-tailed passerine (perching) birds in the family Corvidae (with crows, ravens, rooks, jackdaws, jays and magpies). Their natural habitat is open scrub and forests, but they’re found more often now in agricultural areas and urban gardens. And in one unusual place where they learned fire-eating. (Photo here.)

“At a small temple in the Indian state of Gujarat, the caretakers regularly set out small votive candles made with clarified butter. The birds flit down to steal the candles, extinguish the butter-soaked wicks with a quick shake of their heads and then gulp them down.”

Just like human fire-eaters, the rufous treepie play with the fire before using their beaks to put it out. Unlike humans, they at least eat the hot torch. No other animal has ever been observed eating or even playing with fire – most likely because no animals (including the rufous treepie) are fireproof.

What about real fire-breathers? There are no dragons and no dragon-ish lizards have the ability. Nor do any mammals. The closest thing in nature is an insect – the Bombardier beetle (Carabidae family). They get the name from their ability to ‘bomb’ other insects with a hot chemical spray emited in all directions out of their abdomens. The near-boiling combination of hydroquinone and hydrogen peroxide is flammable (concentrated hydrogen peroxide is a rocket propellant), so the Bombardier beetles are wise to avoid open flames, which would ignite the gas burst like fire-breathers spitting lamp oil past a lit torch (think Gene Simmons in KISS). 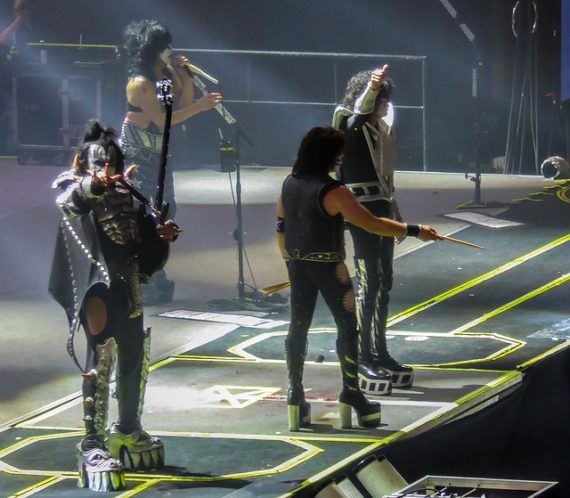 Bombardier beetles aren’t Gene Simmons and rufous treepies aren’t Penn Gillette (of Penn & Teller), one of many magicians who incorporated fire-eating in their acts. However, they’re definitely smarter than the average bird and have a good chance of out-surviving the butter-candle-lighting monks.

Remember kids … don’t try fire-eating or fire-breathing at home -- even if your friends call you a birdbrain.

The Rendlesham Forest Affair: How Did We Learn of the Incidents?