The Mysterious Order of the Astral Projecting Witch Hunters

The years between 1575 and 1650 were a dark time for Europe, and certainly a bad time to be witch. This was the peak of the Early Modern Witch Trials, during which suspected witches were mercilessly persecuted and tens of thousands of people were executed as practitioners of witchcraft and black magic, a time of inquisitors, witch hunts, torture, and people often condemned to death with little or no trial at all. Between 1580 and 1630 alone it is estimated that over 50,000 people were put to death on charges of witchcraft, and one area where these witch trials were in full effect was in the country of Italy. It is here, in the remote Friuli district of Northeastern Italy, that inquisitors would uncover a new type of witch they had never seen before, a secretive order which had a tradition thought to go back centuries and which was permeated with all manner of strange powers, abilities, and rites.

Beginning in 1575, church authorities started investigating rumors of a shadowy cult that resided in the rural areas of the Friuli region, said by locals to have strange powers and beliefs that had not been seen before. Here it was said that there was a cabal of reclusive magic users who were called the benandanti, which means “good walkers,” and who were supposedly tasked with doing battle with evil witches to protect the populace from their evil magic. According to the traditions, these benandanti could be male or female, and were marked from birth by the presence of an amniotic sac on their head called a caul, which in many traditions was already seen as a sign of supernatural powers, and for the benandanti so important that the cauls were sometimes made into powerful charms and amulets. These chosen ones would then upon reaching adulthood be recruited into the order and gain the ability to travel out of their bodies at night, riding on the backs of various animals and even shapeshifting into various forms in order to hunt down malicious witches, which they called the malandanti, mostly for the purposes of protecting their harvests from the withering black magic they used to blight them. 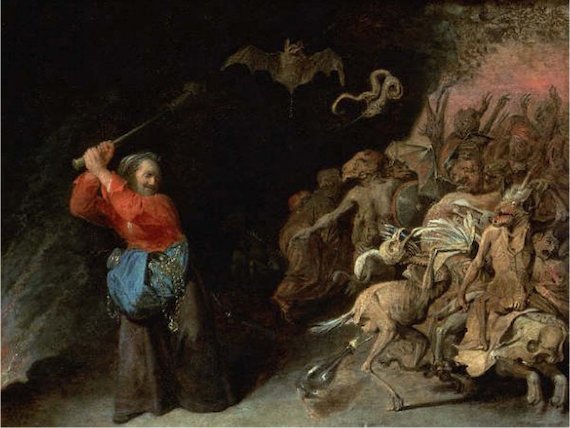 These night time astral travels were carried out on what were called the “Ember Days,” which denote the changing of the seasons marked by the solstices and equinoxes, and almost always on Thursdays. They would ride out on these spiritual excursions upon cocks and goats, and upon finding a coven of malevolent witches they would engage in fierce combat, with the benandanti supposedly using as weapons tight bundles of fennel, which were known for their healing and purification properties, while the malandati fought with sorghum stalks, later to be associated with broomsticks. If the benandanti were successful in their fight, there would be good crops for the rest of the year, and they would return victorious while asking the local people for clean water and wine, and they would often partake of great victory feasts. If they failed, it meant famine, pestilence, and woe. It was very important that they return to their bodies by a certain hour, usually said to be before the first rooster’s crow, and it was said that if they did not then they faced the possibility of not being able to enter their physical form again, doomed to wander the earth as a incorporeal spirit until the husk of their physical body died. It is important to note that this out of body travel was not seen as just mere superstition or allegory, but was actually believed to be a literal feat that they actually performed.

Besides this ability to astral project from their bodies, the benandanti were also known in the region as powerful healers, often sought out for talismans or amulets for the purpose of healing the sick and handicapped or driving out spiritual possessions. It was said that when a witch chose to curse someone with sickness or try to possess their bodies the benandanti were the first people they turned to, and mostly it seemed as if they were anti-witch and a benevolent force for good. The benandanti considered themselves to be warriors of good, the enemy of evil witches and indeed the Devil himself, and they saw themselves as the bringers of prosperity and plentitude to the people, defenders of harvests and the fertility of fields. However, with such amazing magical claims they definitely came up on the Church’s radar, and at first it was not known exactly how to proceed or how these benandanti should be dealt with. It was simply something they'd seen before. At the time the church decided not to actively pursue the matter, as there did not seem to be any Devil worshipping or witch’s sabbath involved, and no defilement of sacraments, so it was chalked up to mere local folklore and pagan superstitions, but this would change.

In 1580, an inquisitor by the name of Fra Felice da Montefalco dusted off the benandanti case and decided to look into it further. To this end, he travelled to the region and began a series of interrogations of suspected or admitted benandanti. He would learn of other abilities that some of them claimed to have, such as speaking with the dead, seeing ghosts, or even communicating with angels, and this led Montefacto to begin to believe that they were indeed heretical and possibly satanic after all. He began to do whatever he could to twist testimonies to fit this new conclusion, claiming that these angels and ghosts were actually the Devil in disguise and even began painting their activities to look very much like witch’s sabbats. He even under intense questioning managed to get several benandanti to admit that it was possible that they were being led astray by the Devil, which only strengthened his resolve that their cult was no better than the witches they claimed to fight. In his mind, all of this talk of nightly spiritual travel, of the soul leaving the body, the shapeshifting, conversations with the dead, and other mystical  abilities were far more sinister than mere folk traditions, especially since most benandanti were adamant that they could really do these things. Due to his interrogations several benandanti were labelled heretics and imprisoned, despite them insisting that they were doing the work of God, and this was to be the beginning of the end for the “good walkers.” 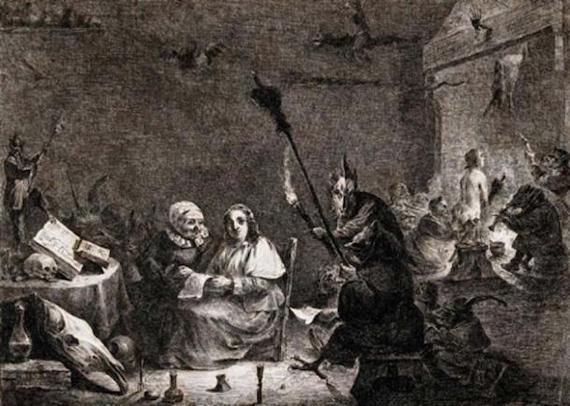 Largely fueled by Montefacto’s testimony, the Catholic Church and its inquisitors began to increasingly link the benandanti to witches, to the point that they became nearly synonymous. Indeed, by the 1600s, inquisitors were getting better at forcing the benandanti to admit to more ominous practices such as Devil worship, desecration of religious symbols, and general anti-Christian debauchery, although most of the time the accused staunchly denied this and complained of being tricked into these admissions. Luckily for them, the church never did fully bring down their wrath upon the benandanti, and while they were certainly persecuted and punished, the general skepticism in witchcraft that was spreading at the time, added to their rarity and the fact that inquisitors were still not quite sure what to make of them, meant that the they were in the end mostly able to avoid the full brunt of the Inquisition, and were forgotten to fade back into obscurity. By the end of the 17th century, the benandati seem to have disappeared altogether. It would not be until the 1960s that the Italian historian Carlo Ginzburg delved into this historical oddity, when her went through the old trial records and compiled a book on the benandati, called The Night Battles: Witchcraft and Agrarian Cults in the Sixteenth and Seventeenth Centuries, in which he postulates that they were the descendants of an ancient pre-Christian fertility cult.

In the end, the benandati have sort of faded into history to be forgotten in the mists of time. Who were these mysterious people who allegedly went out in the night to do spectral battle with the forces of evil and could they ever actually do any of the things they claimed? What was their real relation to witchcraft and where did they originate from? It is an intriguing little piece of history, to think that this secretive cult would remain hidden, going about their witch fighting work and go to battle against the forces of evil, only to attract the ire of the church and disappear into nothingness. Whoever they were, the benandati have become a curious historical oddity that we will perhaps never truly understand.