The Mystery of the Cocaine Mummies

We like to think we have a pretty good handle on history, and that we know where we came from and how we came to this point. Although the history books are revised from time to time most things seem to be set in stone, at least in the mainstream. One of these is that the Americas were not reached by outsiders until the days of Columbus, but over the years there have been myriad discoveries that seem to challenge this notion and threaten to completely rewrite history as we know it. One of these is the discovery of ancient Egyptian mummies who seem to have had a predilection for smoking and getting high.

The story here has its beginnings as far back as 1976, when a Dr. Michelle Lescott, of the Museum of Natural History in Paris was looking through samples that had been sent to her and were parts of the remains of the Egyptian Pharaoh Ramses II, or Ramses the Great. A full analysis was done on the samples, but there would be something that Lescott was not expecting to see. While looking under an electron microscope at some fabric samples from the wrapping cloths, she saw that there were some grains of tobacco leaves clinging to the fibers. It might seem like no big deal, so what if the Pharaoh smoked? But you see the thing is, tobacco at the time was an indigenous plant to the New World, Egyptians had no idea it even existed, and neither would anyone else until the Americas were reached thousands of years later by Europeans in 1492. So why was tobacco on an ancient Egyptian mummy? At the time the finding was curious, but mostly scoffed at by other scholars. To them this was obviously contamination by some careless curator or archeologist. That was about as far as it got at the time, and it wouldn’t be until decades later that the phenomenon would come into the limelight again.

In 1992, a German toxicologist by the name of Dr. Svetla Balabanova, with the Institute of Forensic Medicine at ULM, took another look at the remains of Ramses II. She was intrigued about the possibilities behind Lescott’s amazing forgotten findings, and this time she sought to eliminate accusations of outside contamination by taking samples from deeper in the tissue. To this end she extracted samples from the Pharaoh’s intestinal tract and analyzed them thoroughly, to her amazement finding that the cells themselves held trace amounts of cannabis, cocoa and tobacco, which were plants native to the New World that the Egyptians would have had no business being in contact with, at least according to history as we know it. In order to rule out a fake or contamination, Balabanova ran the tests again and came up with the same results, before turning her eye to other mummies of the ruling class. If the this was just a fake or some outside contamination, then surely these traces wouldn’t be found on other mummies, right? Well, the surprises would keep coming.

Balabanova would have the remains of nine mummies brought in for analysis with radioimmunoassay and gas chromatography/mass spectrometry tests, all dated to about 1000 BCE and including those of a priestess and chantress in the temple of Amun at Thebes by the name of Henut Taui. In all cases she found traces of cocaine, hashish and nicotine within the hair, soft tissues, and bone of the specimens, as well as the traces of the metabolism of cocaine and nicotine, which could have only gotten there through consumption, and at this point it was looking to her that this was beyond coincidence. The implication was that the Egyptians had been making voyages to the New World up to 3,000 years ago, long before Columbus ever saw these shores, and she wrote a paper on her findings called “First identification of drugs in Egyptian mummies.”

The paper and findings were immediately trashed and jumped on by other scientists, who thought it was flying too in the face of established history to be taken seriously, and they were the brunt of much vitriol. In short, it had to be a mistake, but her findings were repeated by another team, who further found that the THC had been likely inhaled and the nicotine and cocaine ingested. Balabanova would continue her research into this anomaly, studying dozens of mummies, finding 78% of them to possess traces of cocaine, and they also found that the younger the mummy had been before death the more likely they were to have it in their system and have it in higher concentrations. It was far too many samples showing the same sorts of results, so how could this be? Had the Egyptians actually been making transatlantic voyages thousands of years before Columbus? As farfetched as it sounded, what other explanations were there? Well, according to skeptics, a lot.

One possibility is that the tests had been showing traces of other substances that had been misidentified as false positives for cocaine and nicotine. For instance, there is an alkaloid within in Solanaceae plants and another plant called belladonna that can produce the same metabolic signature, called a metabolite, as the cocoa plant, and both of which were widely available to the ancient Egyptians. There are also plants within the same genus as the cocoa plant in Africa, which could have also been ingested to cause these false positives. As for nicotine, the tobacco plant is not the only plant that contains nicotine, with the substance even found in small amounts in tomatoes and eggplant, as well as others. In the case of the mummies, it might have come from a plant called Nicotiana africa, which is found in Africa and contains an average of 2% nicotine, an amount that could cause concentrations high enough to test as a positive. There is also the possibility that the nicotine was placed on the corpses some other way, either by heavy smoking near them or through the use of nicotine laced pesticides sprayed on them or around them. With regards to the THC, it has been pointed out as not even worth mentioning because the middle east would have already had access to hashish at the time. 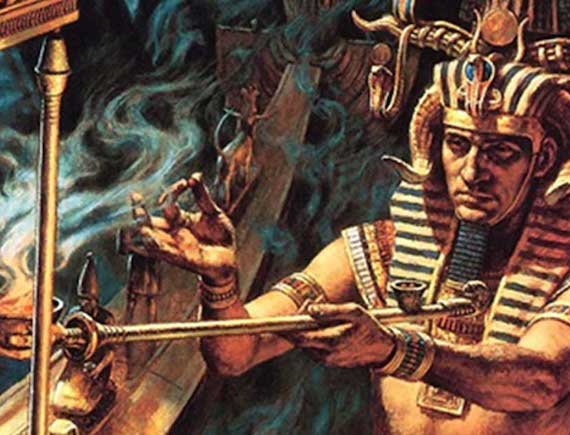 There are other arguments against the hypothesis of Egyptians making it to the New World as well. One is that there is no evidence that the Egyptians had considerably seaworthy boats to that extent. Another is simply that there is no record of any of these supposed epic journeys. We have plenty of written records from ancient Egypt, but nothing about a transatlantic voyage, which seems odd if they were making these trips. If they were not written of then that would mean they were considered insignificant and not even worth mention, which doesn’t really make sense. One good summation of this is given by archeologist Carl Faegans on the site Archeology Review, who says of this:

We know the Egyptians knew how to sail. They did so up and down the Nile all the time. There are murals depicting their journeys to Punt and elsewhere. But riverine navigation or even marine navigation along the coast is vastly different from intercontinental navigation. Many Egyptian boats and barges have been excavated, but none worthy for more than riverine trips or short jaunts in the Mediterranean or Red Seas.

Which brings us to the second assumption. That the Egyptians were willing to trade for hundreds of years with South America and never write down the exploit! This is the culture that so proudly depicted trips to Punt, which was probably somewhere along the west coast of Africa. The Egyptians detailed a great many journeys and expeditions over land as well. They wrote down details of technology in order to teach subsequent generations. But if they navigated to South America and back, they kept it secret as to how they navigated, how they made the journey, how they built the ships, and what they traded with and for. Quite simply, if they did it, they were uncharacteristically not proud of the accomplishment.

What are we looking at with these mysterious mummies? Are they evidence of travel to the New World long before such a thing was deemed possible? Or are they merely the result of misidentification, false positives, and perhaps even trickery? The notion that these ancient Egyptian people ever traveled to the Americas to bring back tobacco and cocaine has largely been swept under the carpet by mainstream archeologists and deemed impossible, the theory largely relegated to the fringe. Yet there still has not been a complete answer for the findings of these substances within the mummies, and it is very likely a subject which will be talked about for some time to come. It seems very probable that the only ones who know for sure are those mummies themselves, and unfortunately they are not talking.

One Tiger King Star Says Tasmanian Tiger is NOT Extinct