"In the final days of December 1980, strange encounters and bizarre incidents occurred in the heart of Rendlesham Forest, Suffolk, England. Based upon their personal encounters, many of the military personnel who were present at the time believed that something extraterrestrial came down in those dark woods. What if, however, there was another explanation for what happened four decades ago? What if that explanation, if revealed, proved to be even more controversial than the theory that aliens arrived from a faraway world? The ramifications for the field of Ufology would be immense. In my new book - The Rendlesham Forest UFO Conspiracy - I reveal that one of the most famous UFO cases of all time was really a series of top secret experiments using holograms, mind-control programs, deception, disinformation, conspiracies and cover-ups. The shocking truth of a forty-year-old mystery is now revealed." Those are my words. They also happen to be words I absolutely stand by. 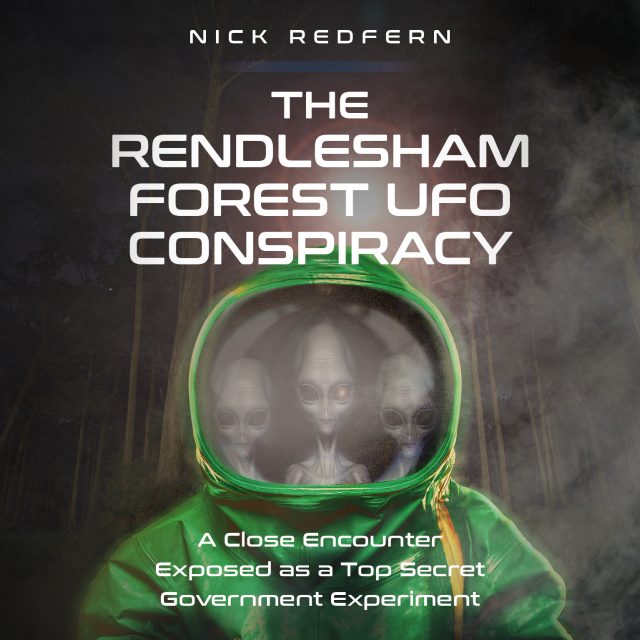 That's right: after having spent a long time digging into certain aspects of the Rendlesham affair, I'm sure that aliens never, ever landed in the forest. In many ways, it was something much stranger. As to why I come to such a controversial conclusion, read on. In the final days of December 1980 multiple, strange encounters and wild incidents occurred in Rendlesham Forest, Suffolk, England. And across a period of three nights, no less. Based upon their personal encounters, many of those who were present believed that something almost unbelievable came down in the near-pitch-black woods on the night of December 26. Lives were altered forever. That said, let's now get to the heart of the controversy.

One of the most important revelations in this overall story concerns the locations of where the monumental events happened. I’m actually not talking about Rendlesham Forest. At least, right now I’m not. Rather, I’m talking about the surrounding locales and their mysterious histories. And why do I consider it my duty to bring your attention to those same surroundings? I’ll tell you: it’s vital to note that for decades the entire area around those famous woods acted as a powerful magnet for classified government programs, sensitive military operations, and top secret projects. They were all of a highly important – but down to earth and domestic – nature. On January 28, 1935, the Tizard Committee, established under the directorship of Sir Henry Tizard, convened its first meeting. It ultimately led to the top secret development of a workable radar system of the type that was employed in the Second World War.

To understand the wider scope of this part of the story, we must address one of the strangest – and one of the most enduring - stories from the Second World War. Arguably, it has become a legend; a most grim and grisly one, too. It concerns a small village in Suffolk called Shingle Street. It is located in between the aforementioned Bawdsey and Orford. As the Guardian newspaper says: "Shingle Street itself has been the subject of fevered speculation ever since it was evacuated in 1940. Conspiracies include rumors of a German landing and a shoreline littered with burning bodies, schemes to protect the coastline with an impenetrable barrage of flames and the testing of experimental chemical bombs. Four dead German airmen were certainly washed up on the beach, and weapons testing did result in the Lifeboat Inn being blown up. As for the rest, the conspiracy theories rumble on."

We’ll now take a look at a place called Orford Ness and what went happened there in the 1950s. The U.K.’s National Trust state: "The 1950s saw the construction of specialized facilities to exploit new post-war technologies such as nuclear power. AWRE [Atomic Weapons Research Establishment] Orford Ness was one of only a few sites in the U.K., and indeed the world, where purpose-built facilities were created for testing the components of nuclear weapons. At the height of the Cold War AWRE and the Royal Aircraft Establishment used Orford Ness for developmental work on the atomic bomb." Moving onto the 1960s, there is the following from the National Trust: “In 1968 work started on the top secret Anglo-American System 441A ‘over-the-horizon’ (OTH) backscatter radar project, finally code-named 'Cobra Mist.' The Anglo-American project, whose main contractor was the Radio Corporation of America, was set up to carry out several ‘missions.’ including detection and tracking of aircraft, detection of missile and satellite vehicle launchings, fulfilling intelligence requirements and providing a research and development test-bed…"

All of the above, top secret research was undertaken only a handful of miles from Rendlesham Forest. That's right: the area has been the location of highly classified experiments since the 1930s. My research has led me to conclude that the "UFO incident" was just another secret experiment. One of the most important parts of this story revolves around the testing of advanced holograms. There is strong evidence that demonstrates the military men in the woods were led to believe they were seeing a UFO landing, and alien activity, when in reality things were very different. Namely, a huge operation designed to deceive on a massive scale. Ray Boeche is someone who has a longstanding involvement in the Rendlesham case. I interviewed Ray extensively for my book. He met with two U.S. Department of Defense whistle-blowers who told him what really happened at Rendlesham Forest. Ray said to me: "They said there was a sense that this was maybe, in some sense, staged. Or, that some of the senior people there were more concerned with the reaction of the men, how they responded to the situation, rather than what was actually going on. That this was some sort of psychotronic device - a hologram - to see what sort of havoc they can wreak with people." 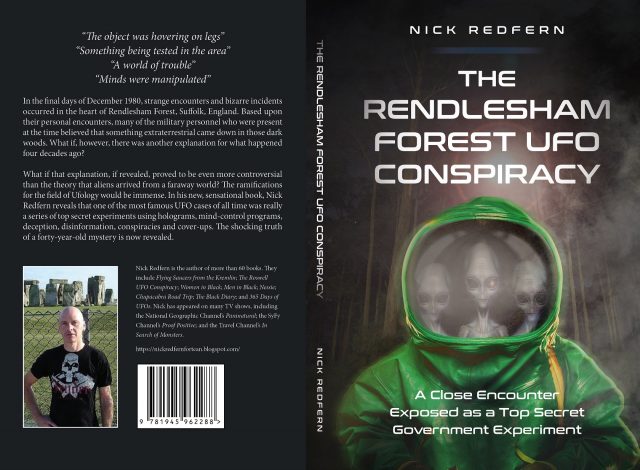 Jenny Randles was onto this angle too: "This is a device which manipulates the subatomic basis of matter at a quantum level and builds a bridge between mind and physical substance. If I understood it correctly, this supposedly stimulated the mind into having vivid hallucinations but, at the same time, created physical effects in the real world which could take on a semblance of the appearance of the hallucinated images."  Clearly, exposing military personnel to advanced hologram-based technology in those woods, and late at night, would have been a perfect way of gauging just how successfully the manufactured visions had achieved their goals. Those goals were: the creation of holographic UFOs that could interact with not just the environment, but with those who were in its presence, too.

There's also evidence that at least some of the men were affected by hallucinogens. Over the years, the late Georgina Bruni (who wrote You Can't Tell the People)  provided me with various data that related to a connection between the Rendlesham Forest experiment and scientists at Porton Down, Wiltshire, U.K. As the BBC note, U.K. military personnel were regularly used in secret mind-altering experiments at Porton Down in the 1950s and 1960s. So, why not use American personnel who were stationed to the United Kingdom in December 1980? The BBC say: “Porton Down was set up in 1916. It was a center designed to test chemical and biological weapons. Nerve gases such as Sarin and CS gas were tested on volunteer servicemen. Servicemen were offered around £2 and three days leave as an incentive to take part in tests. Very few servicemen knew what they were volunteering for and some were even told it was research into the cure for the common cold. In 1953 it is alleged that serviceman Ronald Maddison died after taking part in a Sarin gas experiment. In 1962, one of Porton Down’s own scientists, Geoffrey Bacon died of the plague. Since the end of WWII, 20,000 people have taken part in experiments at Porton Down.” LSD was tested at Porton Down, too. On military personnel, no less. And as the Guardian newspaper stated in 2005: “Fifty years ago, Eric Gow had a baffling and unexplained experience. As a 19-year-old sailor, he remembers going to a clandestine military establishment, where he was given something to drink in a sherry glass and experienced vivid hallucinations."

It was in January 2001 that the then-retired - and now late - British Admiral of the Fleet, Lord Hill-Norton, decided to get into the Rendlesham Forest controversy. Having had an interest in UFOs for decades, he used his considerable clout to try and figure out what occurred in 1980. It was hardly an easy task for Hill-Norton to achieve. Of specific interest to Hill-Norton were the claims of a connection to the activities of the Porton Down staff. He wanted to know "whether personnel from Porton Down visited Rendlesham Forest or the area surrounding RAF Watton in December 1980 or January 1981; and whether they are aware of any tests carried out in either of those two areas aimed at assessing any nuclear, biological or chemical hazard."

Hill-Norton got a response from the government he had dutifully worked for. It was not, however, the reply that he hoped for. The reply came from Baroness Symons of Vernham Dean. She spoke on behalf of the MoD, who provided nothing but a concise comment that didn’t really advance the investigation into the case at all. The baroness said: "The staff at the Defense Evaluation and Research Agency (DERA) Chemic and Biological Defense (CBD) laboratories at Porton Down have made a thorough search of their archives and have found no record of any such visits." It has to be said that government agencies – and their fawning lackeys – can be extremely careful about what they say and how they say it. It should be noted that Baroness Symons never said that there was no Rendlesham-Porton link. What she said was that no evidence of such a connection had been found. That’s a very different thing, altogether. Playing things carefully and tactfully provides government personnel with a perfect "get out clause," in the event that additional information might later surface that shows the earlier claims to have been erroneous.

Mind-control, hallucinogens, holograms, and a location that has been a hotbed for highly classified experiments since the 1930s: they were all key components that led to the creation of one of the most famous UFO cases of all time. Except for one thing: the whole situation was nothing but an incredible, disturbing, series of tests to see just how far the human mind could be manipulated - and how such technologies could potentially, one day, play significant roles on the battlefield.

A Mass UFO Sighting at an Australian High School