There have been people throughout history who have made an indelible mark upon the landscape. Whether it be because of new ideas, technology, or any number of other endeavors, these people have managed to make their mark. Some have become more well-known while others have slipped into obscurity, but all have managed to shape history in some way. One person who has mostly managed to slip through the cracks was a very well-known inventor at the time, who had a curious life and who also just happens to have invented the world's first functioning flying saucer.

The Dutch painter, sculptor, engineer, and inventor Alexander Weygers had a rather colorful life even before he started designing strange, outlandish flying machines. Weygers was born in the Dutch East Indies in 1901 and was raised in his childhood along with his six brothers and sisters on a sprawling remote sugar plantation on the island of Java, where his parents also owned a hotel. His family was well-off, and at the age of 15 they sent him to live in the Netherlands to go to school. It is here where he would become intensely interested in mechanical engineering, naval architecture, and blacksmithing, going on to graduate with a degree in shipbuilding before returning to Java in 1923 along with his wife, Jacoba, but here is where he would run into tragedy.

Apparently Jacoba did not adjust well to life on the island and was deeply unhappy. He would then in 1926 decide to take her and move to Seattle, Washington, in the United States, where he pursued a career in engineering, yet these dreams would soon be dashed. In 1931, Jacoba would tragically die in childbirth, and Weygers had a rough time dealing with it all. He spiralled so deep into depression and despondency that he abandoned engineering altogether to pursue art, enrolling in courses at the Seattle Institute of Art and studying sculpting. He was very good at it, earning accolades from his peers and teachers and gaining a scholarship for his work in the process, eventually studying art in Chicago, travelling the world studying under several master sculptors, and then finally moving to Berkley, California to open his own studio. He did many exhibitions and became much sought after as a teacher, with people coming in from all across the country to study sculpting under him. His respected work would be included in the collection of the Smithsonian Institution in Washington, D.C., win various awards, and by 1940 Weygers was a world-renowned sculptor. However, his life was about to make another sharp change in course.

In 1941, World War II was looming over everything, and the then 40-year-old Weygers entered the U.S. Army, where he became involved in intelligence missions, mostly translating Malay, Dutch, Italian, German, and English. He would serve a 2-year stint in intelligence operations, after which he was discharged in 1943 and headed off to live in Carmel, California, where he would meet his second wife, Marian Weygers. It was during this time that he would become known as a bit of an eccentric, crafting a sprawling mushroom-shaped house that he called a “geodesic dome gone wild” out of pieces of wood, scrap metal, and various junk that he reworked and crafted with his formidable blacksmithing skills, even picking up new skills of wood carving, toolmaking, electrician and plumbing skills, and photography along the way. He also drove around in a homemade steam-driven car, kept bees on his property as an avid beekeeper, and this was all in keeping with his philosophy of self-sustaining living. In the meantime, he wrote several important books on blacksmithing and toolmaking, and it was also during this time that he became increasingly obsessed with creating an idea he had been long percolating for a new, groundbreaking aircraft he called the “discopter.”

For years Weygers had been making sketches of various fantastical machines in his notebooks, many of them which looked as if they had flown straight out of a Jules Verne novel. One of these in particular which he was very interested in actually building was the discopter, an idea he had been toying with since the 1920s. It was an odd-looking craft, saucer shaped with a pilot in the center and meant to be a vertical take-off and landing vehicle that was able to make precise sharp changes in direction and would replace the helicopter, which he felt was a flawed design. He would perfect the design for the discopter, and in 1944 he was granted a patent for his design from with the U.S. Patent Office. Weygers would say of his bizarre invention:

To a helicopter, a craft constructed on the principles of my invention bears a superficial resemblance in that both types are sustained by at least one horizontal rotor. From this point on, however, all similarity between the two types of flying craft ends. A craft embodying my invention is distinguished from a helicopter in that the rotor or rotors in my craft are enclosed within a substantially vertical tunnel, the rotor regarded as a whole is mainshaftless and the external form of the craft is not very different from the familiar discus of the athlete, in common with which the craft enjoys certain aerodynamic advantages characteristic of the passage of the discus thru the air. Not only the rotors and power plant compartments but all of the usual moving and fixed protruding parts, present in both airplanes and helicopters, such as stabilizing and directing means and otherwise, are entirely enclosed within the strikingly simple and cleanly streamlined contour line of the craft when regarded from exteriorly thereof in any elevation view, thereby concealing from the casual view such parts.

He also sent his designs freely to all branches of the military, but at the time no one was interested in mass producing such a craft. Weygers was very excited about his invention, and envisioned it as completely changing the landscape of aviation, but alas not even a prototype was ever actually built. However, in later years the discopter became popular again in the late 1940s and 1950s, when UFOs and flying saucers began to enter the public consciousness. Weygers’ design was dusted off and pretty soon trying to create flying saucer-type aircraft was all the rage. In particular the in the years between 1953 and 1956 the U.S. Patent Office was flooded with a deluge of patent requests for all manner of vehicles with a saucer or “UFO shape.” Even the military and NASA began experimenting with UFO-like vertical take-off and landing designs, to the point that Weygers even accused the Navy of patent infringement, and it was all inspired by the work that Weygers had pioneered. Although he had never created the discopter as a science fiction-themed project based around UFOs had never been on his radar at all, it got to the point where some skeptics were using this drive for making these vehicles as an explanation for the rash of UFO sightings reported through the late 1940s and 1950s. 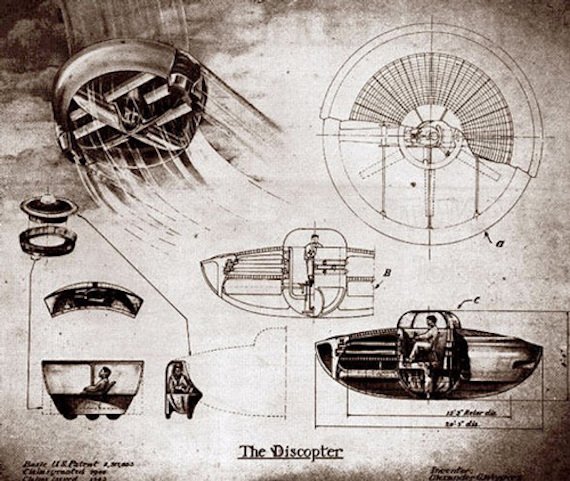 While all this was happening, Weygers himself sort of quietly faded into the background and took up a simple life once again, focusing mostly on sculpting and blacksmithing at his studio in Carmel. He managed to attract a good number of students, who came to learn blacksmithing from him, and he wrote some of the most important works on blacksmithing out there, The Making of Tools and The Modern Blacksmith. Weyger would distance himself from the whole UFO and flying disc craze that he had helped to spark, teaching until the age of 83 before dying in 1989 at the age of 87 as a relative recluse, having never seen his discopter created. It was a sad end for a man about who the San Francisco Chronicle once wrote:

Alexander Weygers is a modern Leonardo da Vinci. He commands attention because he is a success by any standard of excellence in half a dozen professions... a sculptor of heroic dimensions, an inventor, a marine, mechanical, and aeronautic engineer, an artist with a camera, a designer and illustrator, and a virtuoso practitioner of endgrain half-tone wood engraving. He is also blacksmith, machinist, carpenter, electrician, plumber, toolmaker, and beekeeper. He is further a teacher and a reluctant prophet upon whom the admiring descend.

In later years the property and work of Weyger would be meticulously restored and preserved by art collector and dealer, Randy Hunter, who by the time of his own death had bought up almost all of Weygers’ work and turned the place into a sort of museum and shrine in memory of the great inventor, which one can still visit today. In the end the story of Alexander Weygers is a long and tragic one , yet compelling and somewhat inspiring story that will no doubt serve to fuel the imagination for sometime to come.