The Strange Tale of an Early American Spirit Possession

Tales of spiritual or demonic possession have been going on for a long time. The tale of one of the oldest supposed American spiritual possessions on record begins in 1877, in the quiet rural town of Wateska, Illinois. This was a peaceful place, where everyone knew each other and not much typically happened, but strange things began to stir in the summer of 1877, when forces beyond our understanding seem to have gravitated towards the Vennum family, who lived on the outskirts of town. They were a well-liked and well-respected family in town, but they were about to become known for something altogether more bizarre. So would begin the strange ordeal of a classic early case of possession by forces beyond our understanding.

In July of 1877, 13-year-old Lurancy Vennum fell inexplicably ill. She told her mother she was not feeling well, before launching into what seemed to be an epileptic fit, sprawled out on the floor having convulsions, before falling unconscious for the next 5 hours. Upon awakening, Lurancy claimed that she had visited Heaven, and that she had met with her brother and sister, who had died some years before, as well as angels and other spirits of the dead. She would claim, “There were persons in my room last night, and they called ‘Rancy! Rancy!!’ and I felt their breath on my face. I saw heaven and angels and a lot of other ghosts who talked to me.” This was already strange enough as it is, but the unusual episodes would continue, with Lurancy having convulsive fits or lapsing into strange trances and catatonic states, during which she would sometimes speak in different voices or describe people and places she had never met or been to, none of which she could remember when she snapped out of it. She would sometimes point out and speak of spirits in the room there with them, which no one else could see, and these trances could last hours or even days, and they became so frequent that it truly alarmed her deeply religious and devoutly Orthodox family.

The Vennums brought their ailing daughter in to be examined by medical professionals, but no one could find anything physically wrong with her. It was assumed that this must be some kind of mental issue, and Lurancy’s parents actually made arrangements to have their own daughter sent off to an insane asylum. It was at this time that they would be approached by a man named Asa B. Roff, who happened to be a spiritualist and said that his own daughter Mary had experienced the same affliction around a decade before and died at the age of 19 after cutting herself with a razor during one of her fits, after devolving into seeming insanity. He claimed he could help them, and that he believed that she was not insane, but rather had the gift of spirit mediumship. He convinced the parents to let a physician and spiritualist named Dr. E. Winchester Stevens to personally examine her, and things would get stranger still.

On her very first meeting with Stevens, things were odd, with the doctor describing her as “curled up on the chair, eyes staring, looking in every way like an old hag.” Lurancy during their meetings would launch into trances and claim to be possessed by various different spirits. On one occasion she said she was a Katrina Hogan, a 63-year-old woman from Germany, and yet another she became a young boy called Willie Canning, and during these spells she was able to give incredibly vivid portrayals of these people’s lives. But the most amazing personality that emerged during these sessions was a presence that called itself “Mary Roff.” Interestingly, this was Asa’s own deceased daughter. And so would begin the next weird chapter of the tale.

The Roff family was notified of what was going on, and made their way to the Vennum residence with much skepticism, but any doubts were soon melted away. Lurancy in her trance and channeling Mary, was able to immediately identify them, and went through a long list of things only their lost daughter could have possibly known. It was all amazing enough that the Roffs were convinced that she was actually possessed by their dead daughter, and so arrangements were made for a sort of experiment, in which Lurancy would be sent to live with them in an effort to see what sort of things this would dislodge from within her. While there she slipped fully into the Mary persona, knowing every detail of the house and where everything was, as well as picking up skills that Mary had had, such as playing the piano, all the while interacting with her family as if she had never left. It was all very spooky, made even spookier in that during this time Lurancy seemed to not in any way recognize her own family. Asa Roff would say:

Mary is perfectly happy; She recognizes everybody and everything that she knew when in her body 12 or more years ago. She knows nobody nor anything whatever that is known by Lurancy… Mr Vennum has been to see her, and also her brother Henry, at different times, but she don’t know anything about them. Mrs Vennum is still unable to come and see her daughter. She has been nothing but Mary ever since she has been here, and knows nothing but what Mary knew. She has entered the trance once every other day for some days. She is perfectly happy. She attempted to play and sing as of yore. The songs were the ones of her youth; As we stood listening, the familiar notes were hers, although emanating from another’s lips. The effect, however, was only partially successful. Tuning with a smile to the family present, she remarked, “I can not make my fingers work just right.

It was all quite amazing, with everyone who had known Mary convinced that this girl was truly being inhabited by her spirit, and Lurancy became known as the “Watseka Wonder.” Then, one day after several months of living with the Roffs, “Mary” bid her family a tearful goodbye and returned to the Vennum house, after which the presence of Mary seemed to dissipate forever. Stevens would write of this:

The meeting with her parents at the home was very affecting and now she seems to be a healthy, happy little girl, going about noting things she saw before she was stricken, and recognizes changes that have since taken place. This is a remarkable case, and the fact that we cannot understand such things, does not do away with the existence of these unaccountable manifestations. 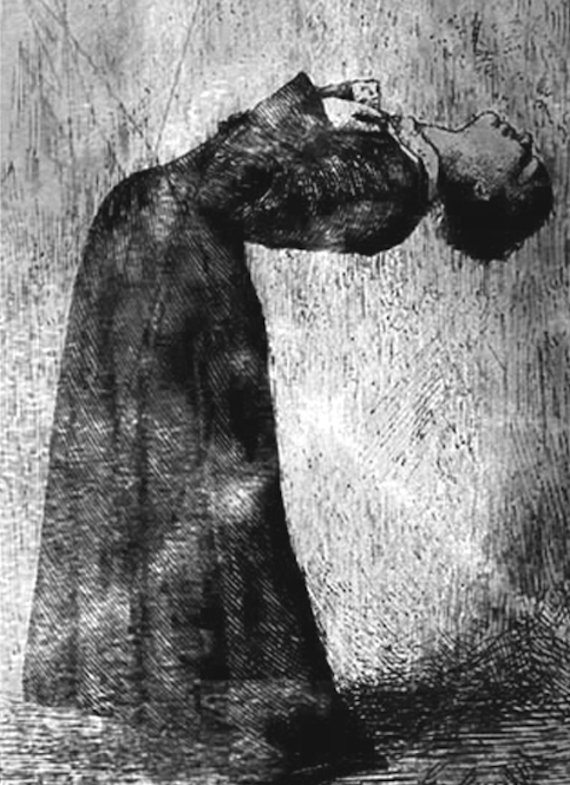 After this, Lurancy ceased to go into her trances, and it was thought that Mary’s spirit had somehow cured her of whatever she had been afflicted with, although for the next few years she would occasionally channel Mary’s spirit for the benefit of the Roffs, and Stevens would write a book on the whole ordeal entitled “The Watseka Wonder.” At the time the news of Lurancy’s plight was all over the place, but there were many in town who were skeptical. After all, this was a place of mostly religious Orthodox citizens, and they for the most part did not take kindly to this spiritualist mumbo jumbo. Nevertheless, it all sort of was forgotten about, and Lurancy would go on to live a reasonably normal life until passing away in 1952 at the age of 87, having never been bothered again by these visions.

What was going on with this poor girl? Was this a true case of spiritual possession, this girl plagued by forces from beyond? Was it just a mental instability or even a hoax? There is no way to really know for sure, but one thing that is clear is that the case of Lurancy Vennum is perhaps among the oldest known cases of spiritual possession on record in America, and it remains a mystery.