Imagine you are out at an outdoor event, perhaps a BBQ or camping trip and a bug keeps flying by your face. You try to ignore it at first, perhaps lazily swat at it, but it keeps coming back for more. This is nothing unusual, as bugs have a habit of ruining the outdoors for people, but then it lands on your arm. Now you can see it doesn't exactly look like a regular fly, something is off about it. You lean in, peer down at the little insect perched upon your arm, and that is when you notice that it is peering right back at you, with a camera in place of eyes. Welcome to the future of drone technology, with robotic flies and more, and it is every bit as weird as it sounds.

Everyone is familiar with drones nowadays. They seem to be everywhere, and they are getting smaller and cooler as time goes on, but how small can they really get, some may wonder. Well, looking at the trends in the technology these days, it seems that they can get very small, indeed. One private research team called Animal Dynamics has been working on tiny drones that use the concept of biomechanics, that is, mimicking the natural movements of insects and birds in nature. After all, what better designer is there than hundreds of millions of years of evolution? A prime example of this is one of their drones that aims to copy the shape and movements of a dragonfly, a drone called the “Skeeter.” The drone is launched by hand, its design allows it to maintain flight in high winds of up to more than 20 knots (23mph or 37km/h) due to its close approximation of an actual dragonfly, and its multiple wings give it deft movement control. One of the researchers who helped design it, Alex Caccia, has said of its biomechanical design:

The way to really understand how a bird or insect flies is to build a vehicle using the same principles. And that’s what we set up Animal Dynamics to do. Small drones often have problems maneuvering in heavy wind. Yet dragonflies don’t have this problem. So we used flapping wings to replicate this effect in our Skeeter. Making devices with flapping wings is very, very hard. A dragonfly is an awesome flyer. It's just insane how beautiful they are, nothing is left to chance in that design. It has very sophisticated flight control. 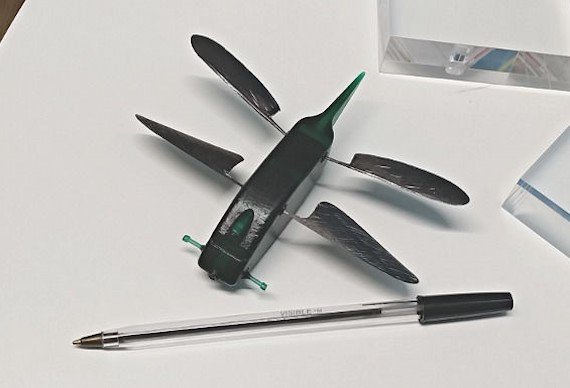 In addition to its small size and sophisticated controls, the Skeeter also can be equipped with a camera and communications links, using the type of miniaturized tech found in mobile smartphones. Currently the Skeeter measures around 8 inches long, but of course the team is working on smaller, lighter versions. As impressive as it is, Skeeter is not even the smallest insect drone out there. Another model designed by a team at the Delft University of Technology is called the “Delfly,” and weighs less than 50 grams. The Delfly is meant to copy the movements of a fruit fly, and has advanced software that allows it to autonomously fly about and avoid obstacles on its four cutting edge wings, fashioned from ultra-light transparent foil. The drone has been designed for monitoring agricultural crops, and is equipped with a minuscule camera. The team behind the Delfly hope to equip it with dynamic AI that will allow it to mimic the way an insect erratically flies about and avoids objects, and it seems very likely someone could easily mistake it for an actual fly. The only problem it faces at the moment is that it is so small that it has limited battery life, only able to stay aloft for 6 to 9 minutes at a time.

Indeed, this is the challenge that any sophisticated technology faces; the limitations of battery life. There is only so small you can make a battery before its efficiency is compromised, no matter how light and small the equipment, and it is a problem we are stuck with until battery technology is seriously upgraded. In fact, many of the prototype insect drones currently rely on being tethered to an external power source for the time being. But what if your drone doesn’t need batteries at all? That is the idea behind another drone designed by engineers at the University of Washington, who have created a robotic flying insect, which they call the RoboFly, that does not rely on any battery or external power source at all. Instead, the drone, which is about the same weight as a toothpick, rides about on a laser beam. This beam is invisible, and is aimed at a photovoltaic cell on the drone, which is then amplified with a circuit and is enough to power its wings and other components. However, even with such a game changing development, the RoboFly, and indeed all insect-sized unmanned aerial vehicles (UAVs), which are usually referred to as micro aerial vehicles (MAVs), still face some big challenges going ahead. Sawyer Fuller, leader of the team that created the RoboFly and director of the slightly ominous sounding Autonomous Insect Robotics Laboratory, has said of this:

A lot of the sensors that have been used on larger robots successfully just aren’t available at fly size. Radar, scanning lasers, range finders — these things that make the perfect maps of the world, that things like self-driving cars use. So we’re going to have to use basically the same sensor suite as a fly uses, a little camera. 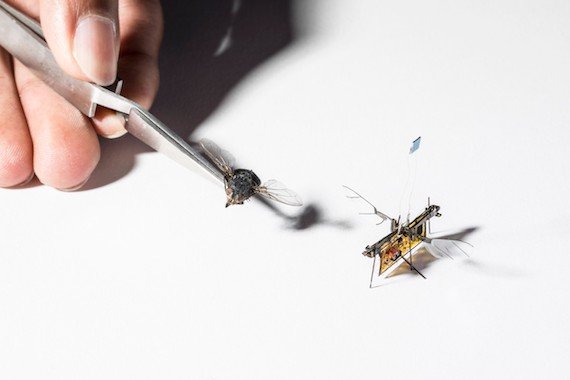 However, great progress is being made, and these little drones are becoming more sophisticated in leaps and bounds, with the final aim being a fully autonomous flying insect robot that can more or less operate on its own or with only minimal human oversight. Fuller is very optimistic about the prospects, saying, “For full autonomous I would say we are about five years off probably.” Such a MAV would have all manner of applications, including surveillance, logistics, agriculture, taking measurements in hostile environments that a traditional drone can’t fit into or operating in hazardous environments, finding victims of earthquakes or other natural disasters, planetary exploration, and many others. Many readers might be thinking about now whether the military has any interest in all of this, and the answer is, of course they do.

The use of these MAVs is seen as very promising to the military, and the U.S. government has poured in over a billion dollars of funding into such research. Indeed, Animal Dynamics has been courted by the military with funding, and the creators of the RoboFly have also received generous funding for their research. The U.S. government’s own Defense Advanced Research Projects Agency (DARPA) has been pursuing the technology for years, as have other countries. On the battlefield MAVs have obvious applications, such as spying and reconnaissance, but they are also seen as having other uses, such as attaching to enemies to serve as tracking devices or very literal “bugs,” attaching tags to enemy vehicles to make targeting easier, taking DNA samples, or even administering poisons or dangerous chemical or biological agents. There are quite a few world governments who are actively pursuing these insect drones, and one New Zealand based strategic analyst, Paul Buchanan, has said of this landscape:

The work on miniaturization began decades ago during the Cold War, both in the USA and USSR, and to a lesser extent the UK and China. The idea then and now was to have an undetectable and easily expendable weapons delivery or intelligence collection system. Nano technologies in particular have seen an increase in research on miniaturized UAVs, something that is not exclusive to government scientific agencies, but which also has sparked significant private sector involvement. That is because beyond the military, security and intelligence applications of miniaturized UAVs, the commercial applications of such platforms are potentially game changing. Within a few short years the world will be divided into those who have them and those who do not, with the advantage in a wide range of human endeavor going to the former. 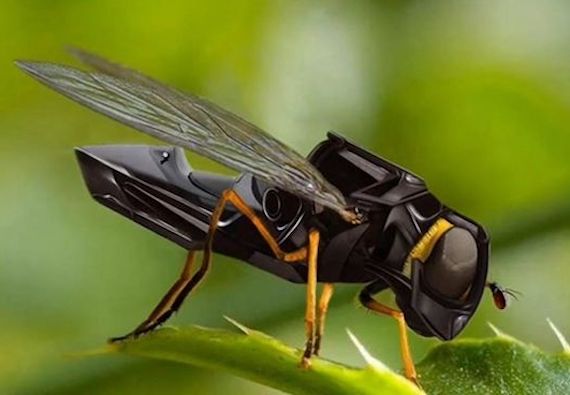 While so far all of this is in the prototype stages and there are no working models in the field yet as far as we know, some conspiracy theorists believe that this is not even something for down the line in the future, but that the technology is already perfected and being used against an unsuspecting populace at this very moment. For instance, there was a report in 2007 in the Washington Post of several witnesses at an anti-war rally who claimed to have seen tiny drones like dragonflies or bumblebees darting about. One of these witnesses would say:

I look up and I’m like, ‘what the hell is that?’ They looked like dragonflies or little helicopters, but I mean, those are not insects. They were large for dragonflies and I thought, 'is that mechanical or is that alive?

Such supposed sightings of these tiny drones have increased in recent years, leading to the idea that the technology is already being used to spy on us, but of course the government and research institutes behind it all insist that working models are still a thing of the future. Yet it is still a scary thought, scary enough to instill paranoia, which is only fueled by these reports and others like them. One famous recent meme that caused a lot of panic in 2019 was a post from Facebook user in South Africa, which shows an eerily mosquito-like robot perched on a human finger, accompanied by the text:

Is this a mosquito? No. It’s an insect spy drone for urban areas, already in production, funded by the US government. It can be remotely controlled and is equipped with a camera and a microphone. It can land on you, and may have the potential to take a DNA sample or leave RFID tracking nanotechnology on your skin. It can fly through an open window, or it can attach to your clothing until you take it home. 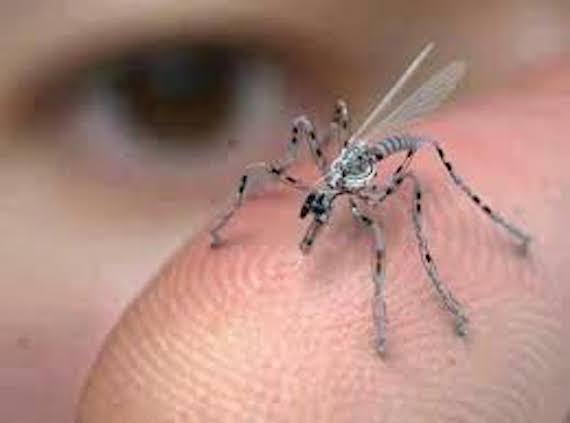 The post went viral, with rampant speculation on whether it was true or not. The debunking site Snopes came to the conclusion that the photo was fake and it was just a fictional meme, but others are not so sure, igniting the debate again on whether this is or will be a reality, or whether it ever should be. Regardless of the ethical and privacy concerns of having insect sized spy drones flying around, with all of the money and effort being put into this technology, the question of whether we will really have mosquito sized robots buzzing about seems to be not one of if, but of when. Perhaps they are even here already. So the next time you are out at a BBQ and that annoying fly keeps buzzing past your head, you might just want to take a closer look. Just in case.

Male Beards May Have Evolved to Protect Chins From Punches