When Giant Anchovies With One Monster Fang Roamed the Seas

Now there’s a few words you probably never expected to see together in one headline – certainly not in a headline of a scientific media site. Yet that sentence opened an article in LiveScience announcing the discovery of two different species of giant anchovies in what were two different oceans on nearly opposite sides of the prehistoric world. Did they find any giant pizza boxes?

“Two forms, the early Eocene (Ypresian) Clupeopsis from Belgium and a new genus from the middle Eocene (Lutetian) of Pakistan, bear conspicuous features indicative of predatory ecology, including large size, long gapes and caniniform dentition. Most remarkable is the presence of a single, massive vomerine fang offset from the midline in both.”

It’s paragraphs like those in the Royal Society Open Science journal that make us appreciate LiveScience for interpreting what archeologists far above our pay grade found in modern-day Pakistan and Belgium. What lead researcher Alessio Capobianco, a doctoral student in the Department of Earth and Environmental Sciences at the University of Michigan, is trying to say is that he and his colleagues have finally identified one of two extinct ancestors of modern-day anchovies – those tasty little pizza toppings and salad ingredients of the family Engraulidae. However, this 3-foot-long monster is a long way from fitting whole in a small can. In fact, there’s barely room in one for its single giant fang.

"Clupeopsis and Monosmilus are clearly closely related because there is no other known fish (living or extinct) that has the same complement of teeth: a row of large fang-like teeth on the lower jaw, no teeth on the margin of the upper jaw and a single giant 'saber-tooth' on the top of the mouth. There is simply no other fish that looks like this."

Well, there’s two. The Belgian fossil was discovered in 1946 and named Clupeopsis straeleni. The Pakistani fossil was found in 1977 but stuffed in a box until recently when Capobianco and his team determined it was a new species from 45-to-50 million years ago. The name Monosmilus chureloides refers to the tooth and the fish’s looks – it translates to "single knife Churel." Churels are shapeshifting vampire-like demons in Pakistani and South Asian mythology – ugly and frightening spirits that shape-shift into beautiful women (isn’t that always the case?) to lure men to their deaths (isn’t that always the case too?).

"When the mouth was closed, it would have extended from the top of the mouth all the way down to the bottom of its 'chin.'"

‘It’ is the saber tooth, which was about 0.8 inches (2 cm) long, or about 20% the length of the whole head. Even if they avoided that one giant fang, prey were most likely easily shredded by the mouthful of 16 more curved teeth on its lower jaw that were small in the back and "progressively larger towards the front" – although Capobianco admits any ideas on how these monsters lived is pure speculation … as is how they died. Both survived the mass dinosaur extinction but disappeared eventually, leaving nothing in the waters quite like them, including their tiny anchovy descendants. 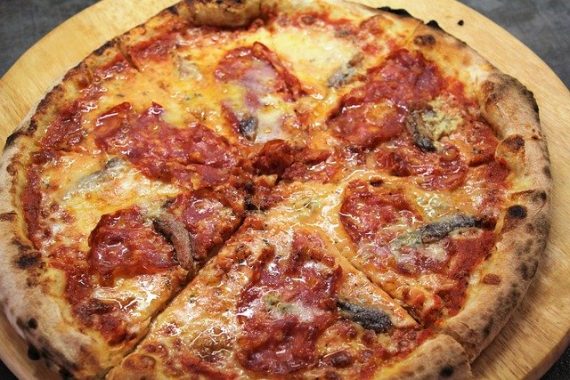 I’ll have an extra-large with everything -- hold the shapeshifting, one-fanged, man-killing vampire demons.

Strange Animals in the U.K. That Aren’t Really Animals