A Strange Lake Monster in Columbia

Sitting at an elevation of 10,000 feet up in the highlands of Columbia, lying a 3-hour drive from Bogota and surrounded by wetlands and scenic panoramas of mountains is the majestic Lake Tota, also known locally as Lago de Tota and Laguna de Tota. At 21 square miles in area, it is Columbia’s largest lake, the remnants of a vast ancient inland sea. Despite the relative remoteness of the locale, Lake Tota is still a popular destination for tourists, who flock here from all of the region for various outdoor activities such as hiking the picturesque trails, kayaking, fishing for record trout, and sunbathing on the lake’s unique white sand beaches. The lake is also the home of various myths and legends, as well as a mysterious menacing monster said to dwell in its depths.

Lake Tota was long considered sacred by the Native Muisca people of the area, who believed it was created in an epic battle between a mythical hero and an evil spirit called Busiraco, who took the form of a black snake, lived underground, and created water shortages that parched the earth into a desolate dry wasteland. This black snake instilled terror in the people of the region, and so a powerful priest by the name of Monetá went to try and exorcise the foul creature and bring back water to the area. With the help of another mythical hero, Siramena, Monetá was able to defeat the great black snake and send it to fall dead to the bottom of its dank, Stygian cave. One version of the legend says of what happened next and the creation of the lake:

Moneta removed from his breast a valuable gem. He thought for a moment. A tear rolled down his cheeks and took form as a diamond in the green case of an immense emerald. He lifted the gem in his right hand and threw it hard into the abyss. The gem flashed through the air like brilliant embers of green. The crowd looked blank with amazement; the gemstone landed exactly on top of the lifeless black snake. And then...a miracle! The stone lost its natural hardness. The miracle manifested and the purest green waves started appearing and appearing. The vast gulf was filled with transparent waters fringed white foam. The people were amazed and could not comprehend what they saw.

This legend was perhaps based on something very real in the lake, as when conquistadors began to come into the region they heard stories of a “dragon” or giant black snake that lived there. Perhaps the first of these early explorers who heard of the beast in Lake Tola was the conquistador Gonzalo Jimenez de Quesada (1509–1579), who heard from the natives that there lived in these waters an immense black serpent that was greatly feared and which they called the Muyso Akyqake. Indeed, according to the Muisca people, the lake was too dangerous to navigate because the fierce monster was known to attack canoes and boats, and it was even said to pluck unsuspecting victims from shore. Although it seems Quesada never actually saw the creature himself, he definitely came away with the impression that the people really believed that something threatening was down there in the depths.

The giant black monster was then mentioned by Colombian priest and historian Lucas Fernández de Piedrahita in his 1676 text General History of the Conquest of the New Kingdom of Granada: the SCRM d. King Charles II of Spain and the Indies, in which he describes the beast as “fish with a black head like an ox and larger than a whale,” and mentions a sighting made in 1652 by a “Doña Andrea Vargas, lady of the country.” According to Piedrahita, the creature, which he called the diablo ballena, or “devil whale,” was often considered to be a demon or even the Devil himself by the natives. Such stories continued to circulate, and in the 19th century the monster of Lake Tola was mentioned by the French explorer and diplomat Gaspard Théodore Mollien after an excursion to the region in the early 1820s. He would write of what thusly:

Superstition has continued to inhabit these places concerning horrific wonders: indeed, the rugged look of the region; suspended waters, so to speak, and such a height to always be agitated by the wind blowing from Toxillo, the most elevated wetlands of lake Tota; a slimy substance, oval, and filled with unpleasant water like the sand of its beaches, everything tends to arouse surprise. According to the people in the region, the lake is not navigable; the evil character inhabits its depths in dwellings, they say, one can see the gateways if they stay away from the shores and head toward the middle of the lake, occasionally out of the abyss a monstrous fish can be seen only briefly. 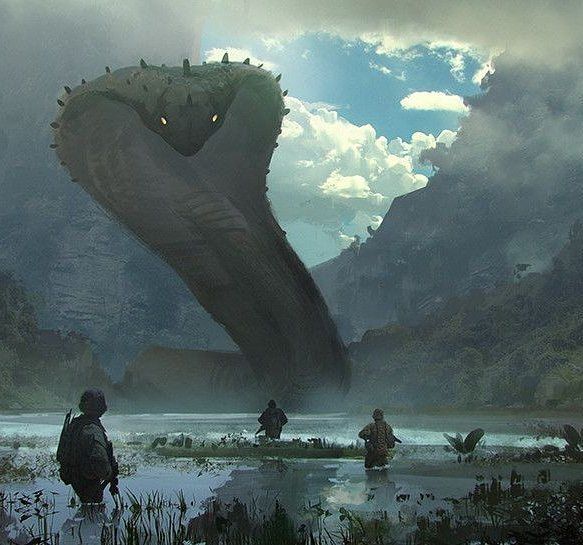 Of course, there were skeptics, and even in the 19th century there were those who doubted that this was anything other than spooky Native legends and myths. One of these was the Colombian writer, politician, teacher and journalist Manuel Ancízar, who was an advocate of draining the lake to make way for agricultural land, and seemed to be actively trying to debunk the existence of the Lake Tota monster when he wrote in 1852:

This tall story involved the freshwater devil [in reference to "diablo ballena" quoted Piedrahita] and now no one has the courage to explore the lake, which had little islands that Piedrahita noted were even worse. Recently, an Englishman arrived who was not afraid of the devil, and manufactured a reed raft, went to the largest island which was peacefully possessed by … shy deer and there he held a bloody battle for the island. Following the example of the Englishman, other boaters arrived in rafts and canoes, occupying the islands and the lake and dispelling the spooky stories. Today, the only dangers are those caused by the storms of the Toquillo wetlands, when the three square areas of surface waters are agitated by windstorms.

The supposed creature has been sporadically spotted ever since, and although such accounts are very rare, one wonders what is behind it all. Is this just myths and legends, or is there something more to it all? Where does lore end and reality begin? Is there a chance that a real unidentified creature is behind all of the stories, and if so what could it be? For the time being, Lake Tota keeps its secrets close.

The Hazards of Ufology, Part 2: Aliens, Demons or Both