An Ex-Soldier’s Weird Life and a Mass Alien Abduction

In the realms of UFO and alien encounters there are many strange tales and reports. Many of these can really stand out as particularly odd, with some people experiencing multiple encounters throughout their lives. One such witness claims to have had myriad brushes with the strange over the years, and also brings us a tale of a very odd incident that supposedly involved a mass abduction of soldiers by aliens and top secret cover-ups.

The strange tale here is one of just many told by alien contactee Bill Brooks, in England, who claims that he has had multiple encounters with aliens all of his life. In regular life, 66-year-old Brooks is a professional musician, and for many years he was blissfully unaware of the bizarre experiences he had been having all of his life, as these memories had been long dormant and locked away within the confines of his mind. It was not until when he was 44 years of age that he was going home one night from a gig and had a strange encounter that would forever change his life. He claims that he had an encounter with a UFO, during which he experienced an intense “memory download” and all of his past brushes with the otherworldly came rushing back to him, as if they had been wiped and were only now emerging to hit him all at once.

He would recall that his first encounter with aliens had happened when he was just 10 years old, when he saw a family of four humanoid Nordic-looking aliens making crop circles in a field. These aliens then apparently took him aboard their ship and taught him how to use psychic powers to move small metallic spheres. It would only get weirder from there, as he then was frequently contacted by aliens, including the Nordic aliens, reptilian humanoids, and the iconic Greys that more people are familiar with. Over the course of his life he claims that he was experimented on many times by these various entities, and at some point had several implants removed, and it is all very weird, but some of his strangest stories revolve his time spent in the military.

During his time with the British army, Brooks claims to have had many very surreal experiences. One was a secret mind control experiment he claims to have been a part of at Porton Down, UK, during which he was given psychedelic drugs and forced to watch a spinning black spiral on a white walls as strange commands were barked at him. He says these experiments were designed to make soldiers more aggressive and easily controlled by their handlers. Another weird experience was in 1968, when he was stationed at Dempsey Barracks, Sennelager, Germany. While there he says he had a paranormal  encounter with some sort of supernatural entity, of which he has said:

My barrack room was on the second floor of a huge old four story building that dated back to before WWII. I shared this room with three other young soldiers, we each had a corner with a military issue metal bed and a large dark green locker. It was long gone midnight and all of the occupants of my room were in bed sound asleep as I was too until something disturbed me. I woke on hearing the sound of footsteps walking across the bare wooden floor and can recall thinking to myself that it was the drunken Welshman that had the bed in the far corner by the window. Sitting up slightly I looked forward to see who it was, it was not Taffy. Standing at the foot of my bed was a horrible looking apparition that seemed to be lit from within it looked like an injured soldier as its head was half missing. I remember trying to scream but could not make a sound nor could I move, I was literally transfixed with terror.

These are already quite strange, but his most harrowing and spectacular claimed experience was when he claims that there was a mass alien at the base that seemed to be held with the cooperation of what appeared to be American military officials. The whole bizarre story begins with what he and the others at first thought was a simulated gas attack for training purposes, and he says of this:

It was a late autumnal evening, around eight or nine when we noticed an orange-coloured mist coming towards our position which definitely got our attention. The soldier I was with Joe said he believed it was a simulated gas attack. We went back to the base camp to warn our section to put on their gas masks. When we arrived we were surprised to find everyone asleep in their vehicles. We woke an NCO and reported to him what we had seen and that we thought this was a simulated gas attack. He said it was not possible as the training exercise had been cancelled and the section was on stand down. Joe and I then found somewhere to rest and as we lay back on some camouflage nets I saw an incredible scene. I saw a light and what looked like smoke coming towards us. As I looked away from the light my field of vision rested on a further site that I could make no sense of. I watched with incredulity a scene that I knew should not be possible and strained my eyes to make sure that what I was seeing was not a figment of my imagination.

He claims that after this, the soldiers began to get up and walk towards a bright light sitting in a nearby field, all of them shambling along like zombies as if in a trance. It would only get more bizarre and sinister from there. He continues:

The men, as if under orders began leaving the vehicles they been sleeping soundly in which were parked a little closer to the field than we were. They seemed to be in a trance and looked for all the world as if they were floating towards some object with very bright lights in the field. Obscured by the brightness of the light, I struggled to make out any details of what I was seeing though it looked like some kind of vehicle. The guys had been on exercise during the day and were exhausted, yet here they were all moving in unison, but in an apparent state of sleep. Joe and I had a panoramic view because we were on top of a vehicle on the camouflage nets and very much awake. I decided to investigate and see where the men had gone and started down from the vehicle, but Jo said no, stay put. Don’t go. I didn’t know then that he could see armed men coming out of the woods, walking in our direction. Our vehicle was parked about 100 yards in front of the woods and to the right was the field where I now believe a UFO had landed. As I looked up and saw Joe staring towards the wood I quickly stared in that direction and was suddenly confronted by a man dressed in black coveralls with some kind of small blue square shaped badge at the top of the right sleeve. It soon became apparent that there were several of these men similarly dressed all with guns and as far as I could tell they were all blonde. This guy in front of me had a gun that he was pointing in my direction. He spoke and said walk towards the light. I hesitated because I could still hear Joe telling me not to go. 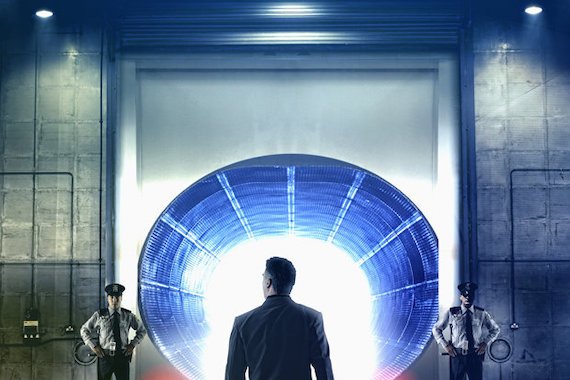 The next thing Brooks would remember was standing on parade in the field with high-ranking officers standing in front of them. Oddly, some of the other men were dressed in what he calls “the old battle dress uniform from years before.” He couldn’t remember anything that had happened since he had been held at gunpoint, indeed he didn’t even know why he was standing out on that field, and he soon found that none of the other men did either. The military officers then told them all very sternly to never speak of anything that had happened the night before, they were all forced to sign non-disclosure documents, and that was that. Brooks would go on to have more strange experiences throughout his life, such as being harassed by the Freemasons and having a vision of a serial killer’s murders before they happened, and he wrote of all of this and more in a book entitled 44: Based on an Ex-Soldier's True Story of Life-Long Encounters Involving Alien Abduction, co-authored by alien abductee expert Joanne Summerscales. It is all a very intense and otherworldly read, and it leaves us to wonder just how much any of this is true. Is any of this real, or is it just a fabricated fiction? There is no way to really be sure, and the story of Bill Brooks remains an intriguing conundrum.