Doomsday Cults, UFOs, and a Mysterious Mountain in France

Sitting within the Pyrenees, in France, and looming over the landscape around it is a peak called Pic de Bugarach or Pech de Bugarach. At 1,230 meters (4,040 ft) high, it is the tallest mountain of the Corbières Massif range, and it unique in that its top layer is an uplift from the Iberian plate and is oddly older than the bottom ones, giving it its nickname of “The Upside Down Mountain.” This is a land of breathtaking vistas, steep cliffs, snowy peaks, deep valleys, and sheer rocky faces, a place seemingly in a world unto itself. Tucked within the foothills of this majestic peak is a tiny little village of no more than 200 hundred people, by the name of Bugarach. It is a remote place, only accessible through treacherous winding roads surrounded by deep ravines, and most people would not even bother to brave coming here at all. It is a mostly forgotten place in a remote corner of the world, and there was a time when most people had never even heard of it. Yet, in the new millennium the village quickly became a famous destination and surrounded by talk of secret tunnels, UFO bases, and the end of the world.

The Pic de Bugarach has long had spooky lore attached to it. Rumors that there are networks of secret underground tunnels have long orbited the mountain, and for decades it has been a hotspot of UFO sightings. Due to this, some New Age groups came to believe that there were actual aliens living deep within the mountain, and that it serves as a sort of UFO base. This was enough to draw people interested in UFOs and aliens, and it was enough to allegedly warrant an investigation into the claims by the former French president François Mitterrand. The mountain began attracting New Agers, who the locals call “esoterics,” and who believe that the mountain had all manner of mystical powers. Various misfits, hippies, and UFO fanatics began to move into the village in droves, and bought up property there and the surrounding areas, but what really caused the Pic de Bugarach to hit the public consciousness was the time it became known as the only place that would survive the end of the world.

In the 2000s, the world began drawing nearer to the ominous date of December 21, 2012, which was when the Mayan calendar was supposed to end and thus herald in the end of the world. On this date it was all meant to end, the end of times predicted centuries ago, the final destination. Although it is unclear how Bugarach first came to be involved with ancient apocalyptic prophecies from half a world away, the village began to gather rumors that it was to be the only place on Earth that would be spared during the coming Armageddon. New Agers said it was the aliens living within the mountain that would save everyone by taking them off planet, while others claimed that it was because of the deep tunnels in its bowels, which would serve as a giant bunker, but whatever one believed, once the word got out that Bugarach was the place to be in 2012 the news hit like wildfire and a torrent of people began pouring in to this rural backwater speck on the map, to the tune of an estimated 20,000 pilgrims, survivalists, New Agers, and macabre curiosity seekers a year. 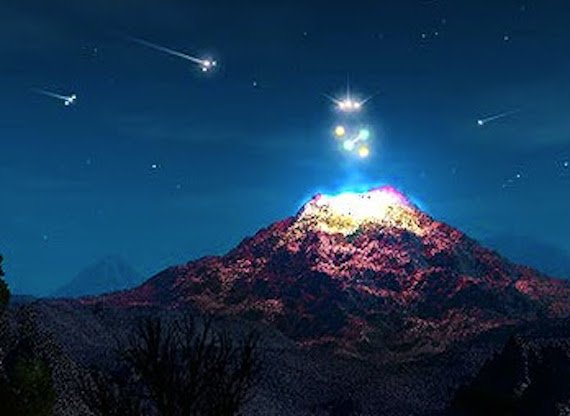 This sudden influx of visitors in the tiny village caused a whole slew of problems. Not only was it just too many people for small commune to handle, but there was pollution, vandalism, people trying to dig into the mountain to find the tunnels or build bunkers, and there was supposedly cult-like behavior and strange rituals that frightened the locals, and which even convinced some to move away altogether. The place became a circus, with all manner of weirdos and doomsday preachers wandering about, which only intensified as the December 21st and the perceived end of the world loomed inexorably closer, all fueled by Internet and news reports that were calling Bugarach the "the village at the end of the world", the "chosen village", and "the doomsday destination." The media were having a field day with it all, and it got so bad that the French government's dedicated watchdog on cults, known as Miviludes, was soon monitoring the situation, predicting that there would be cults looking to exploit the gullible, and even mass suicides when the day came and went without the world ending or the aliens making themselves known. The head of the Miviludes, Serge Blisko, would say of this possibility:

After these moments, there can be a danger of psychological collapse. If fragile, vulnerable people expect an event like the end of the world and it doesn't happen, they can feel let down and in anguish.

Parts of the mountain would be closed down and some trouble makers sent away, but the people kept coming in, and there was even talk of the government possibly sending in actual military troops to quell the chaos, but then December 21st came and… well nothing really. When the predicted doomsdays date came and went, interest in the mountain waned, but this is not to say that it is over. More current predictions for the Mayan calendar end of the world place it in 2020, so perhaps this mystery mountain will gain more followers once again, looking to escape the incoming apocalypse.