Forget the Bermuda Triangle — Some Ships are Mysteriously Traveling in Circles

You’ve probably heard of the Bermuda Triangle, the area of the North Atlantic where ships have disappeared and paranormal theories are born. You may have heard of the Devil’s Triangle, the Pacific counterpart off the southern coast of Japan. Until this week, this writer had never heard of areas in the South China Sea and off the west coast of South Africa where groups of ships have suddenly been forced into traveling in tight circles, sometimes in scary ever-decreasing spirals. More underwater alien bases? Ghosts? Climate change? Something else? Place your bets now.

“Ships appearing to sail in circles have become an increasingly common and mysterious phenomenon near a number of ports on the coast of China, especially near oil terminals and government facilities - but nothing had been seen where the Willowy was.”

Let’s start with incidents in the South China Sea. (The Willowy related to the South African anomaly.) They were first detected not by ships but by groups tracking ship traffic via their AIS (automated identification system) which broadcast a ship’s unique identifier and its GPS location, course and speed to nearby ships. One such group is SkyTruth, an environmental group monitoring offshore drilling, oil spills and tanker traffic. AIS is dictated by international law but ship owners don’t like it for a variety of reasons – including the fact that they’re often manipulated by smugglers, illegal fishing boats and illegal oil traders. According to Sky News, Phil Diacon, the chief executive of the marine intelligence firm Dryad Global, agrees that the Chinese circles are anomalies caused by signal jammers.

“But according to a global analysis of this data by environmental groups SkyTruth and Global Fishing Watch, a number of circling incidents have also occurred quite a distance away from Chinese ports, with some impossibly appearing miles inland near San Francisco. SkyTruth found the real locations of these ships often thousands of miles away from the circular sailing tracks. The ships were again were often actually near oil terminals or in locations where GPS disruption had been reported before.”

SkyTruth points out there was once a major U.S. Coast Guard communication station at nearby Point Reyes, but that doesn’t explain this or other GPS disruptions over major shipping locations. That includes an incident off the coast of South Africa on May 31.

“At approximately 1am on Sunday morning, the Liberian-flagged crude oil tanker, operated by Singaporean business Executive Ship, suddenly swung starboard and began actually sailing in circles. The ship was unable to steer and the crew reported that four other vessels in its vicinity were caught in a similar spiral, slowly converging on each other for an unknown reason.” 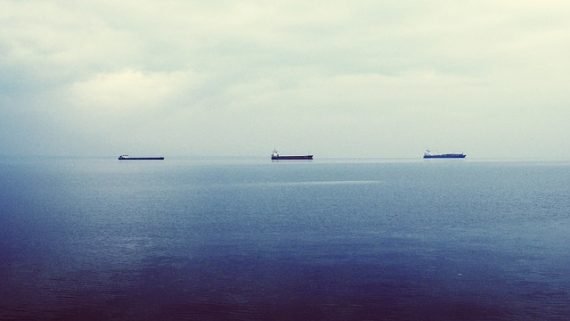 As you can see, something forced the Willowy and four other ships into a circle. While they could have been on auto-tracking and made the moves themselves (until human pilots took over), that doesn’t explain what caused it. Sky News says the Iranian Revolutionary Guard Corps has used a similar GPS manipulation on vessels entering their waters, but the Willowy is a long way from Iran. Sky News suggests something else – a different anomaly that has also been in the news recently.

“Nobody knows why, but the Earth's magnetic field - which has lost almost 10% of its strength over the last two centuries - is growing particularly weak in a large region stretching from Africa to South America, impacting satellites and spacecraft. Known as the South Atlantic Anomaly, the field strength in this area has rapidly shrunk over the past 50 years just as the area itself has grown and moved westward. And over the past five years a second centre of minimum intensity has developed southwest of Africa, very near to where the Willowy was sailing.”

It was reported recently that the South Atlantic Anomaly is breaking apart, with a second anomaly forming near Africa. Could the breakup or the new junior anomaly have caused the forced circling of these ships? As expected, the owners of the Willowy were quick to provide an ‘alternate’ explanation to Sky News.

“The crew, alongside the company's shore-based marine superintendents, investigated and identified that the ship's primary gyrocompass was indeed malfunctioning. The ship resumed its course safely when it switched to using the secondary gyrocompass, along with an old-fashioned magnetic compass for good measure. Asked what caused the failure, the company described it as "an incidental breakdown" and added "repair will be done at the next port where the cause will be identified by shore technicians".”

OK, that may explain the Willowy’s strange behavior, but what about the other ships, which were not owned by Executive Ship?

"The initial presumptive cause of circling for the Willowy was considered to be strong currents which also led the crew to perceive that other ships were circling too.”

A look at the AIS for those vessels would be helpful, but neither Sky News nor SkyTruth seemed to have checked those. Also, it seems fishy that the Willowy crew switched to “an old-fashioned magnetic compass” since those don’t work in the area of the South Atlantic Anomaly – an area of disruption of the electromagnetic kind.

This is worth keeping an eye on. One of these days, you can say you were there when the Circle joined the Triangles.

Giant Eels and the Loch Ness Monsters: Problems with the Neck