Are you ready for some good news? Here you go … we’re not going to die anytime soon under a flood of lava or an atmosphere full of volcanic dust erupted by the Yellowstone supervolcano! You may now return to your regularly scheduled 24/7 blast of bad news.

“The results indicate the hotspot, which today fuels the famous geysers, mudpots, and fumaroles in Yellowstone National Park, may be waning in intensity.”

“Waning” is a good thing when talking volcanoes and that’s what they’re talking in a new study published in Geology and announced in a press release by The Geological Society of America. “They” are volcanologists from the British Geological Survey and the University of California, Santa Cruz, and the “hotspot” they’re referring to is currently the spot underneath the Yellowstone geysers but int the past was the center of massive supervolcano eruptions. Geological records have allowed volcanologists to identify these eruptions and plot them on a timeline. The timeline allowed them to look for patterns and the patterns told them that Yellowstone was overdue for a big one. That didn’t make people in the general vicinity – which is pretty much most of the U.S. east of Yellowstone – feel too safe, especially with a rise in recent earthquake activity. 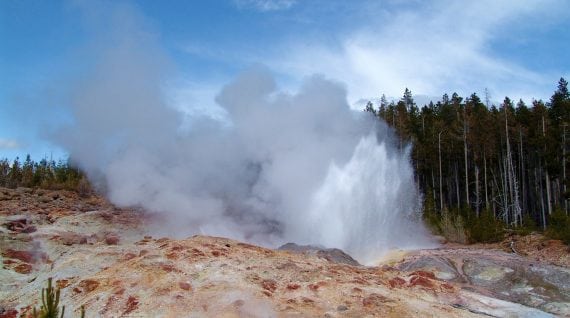 Then they found two more.

“We discovered that deposits previously believed to belong to multiple, smaller eruptions were in fact colossal sheets of volcanic material from two previously unknown super-eruptions at about 9.0 and 8.7 million years ago.”

According to lead author Thomas Knott, a volcanologist at the University of Leicester, new data showed that what were once thought to be clusters of small eruptions in the hotspot were actually two huge ones. HUGE Ones. The one centered at an area called Grey’s Landing would have first covered an area the size of New Jersey in searing-hot volcanic glass while vaporizing anything that had been there, then filled the stratosphere with volcanic dust and rained ash over the entire United States and eventually the entire planet.

“The younger of the two, the Grey’s Landing super-eruption, is now the largest recorded event of the entire Snake-River–Yellowstone volcanic province. It is one of the top five eruptions of all time.” 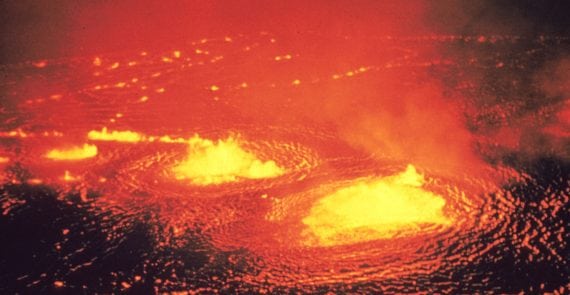 And how is this good news?

These two super-eruptions bring the total to six at the hotspot during the Miocene period of 23 to 5.3 million years ago. Only two more eruptions have occurred in the past 3 million years. This tells Knott and the volcanologists two things. One, the number of hotspot volcanos has “experienced a three-fold decrease in its capacity to produce super-eruption events” which is “a very significant decline.” Two, the new frequency average of hotspot supervolcanos is one every 1.5 million years. The last one was 630,000 years ago, putting the next one – specutively, of course – in 9000,000 years.

That breeze you just felt was a national collective sigh of relief.

But was it too hasty? Will more new geological data be discovered that has new models predicting an eruption sooner? That’s always possible, as is a supervolcano being triggered out-of-sequence by another volcanic eruption, an earthquake or even a nuclear explosion.

You said this was a good news story!

The Strange Mystery of the Phaistos Disc