Is it feasible that the subtropical rain-forests of Australia are home to gigantic, man-eating lizards of twenty to thirty feet in length? Do such monsters lurk in the swamps, lagoons and inland waters of Australia? Could such Jurassic Park-like beasts really remain hidden, undetected, and free to rampage around in unstoppable fashion? Witnesses to the creatures say that is exactly what is happening. As for the creature itself, it’s not something created out of the minds of the fantasy-driven and the deluded. Thousands of years ago, Australia really was home to such immense beasts. The big question is: do they still live, despite the fact that have been declared completely and utterly extinct – in the long-gone past? Just maybe, they are still with us.

The creature in question went by the name of Megalania prisca, a huge, vicious, monitor lizard that roamed Australia at least as late as 40,000 years ago. It got its name thanks to one Richard Owen, a paleontologist of the 1800s – a man who has gone down in history as coining the term Dinosauria, or, in English, "terrible reptile." Generally referred to as just Megalania, its title very appropriately translates to "ancient giant butcher." Many might consider it utterly absurd to believe that packs of thirty-foot monster-lizards could still exist in stealth, in the wilds of modern-day Australia, and not be found. But, let’s take a look at what we know of this undeniably controversial saga. 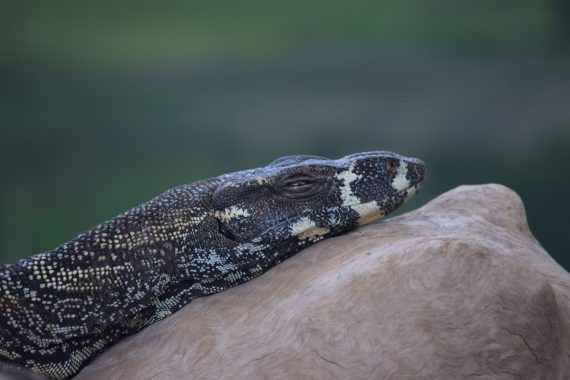 The Australian Museum says of this immense monster – that moved as easily and effortlessly in swamps and lagoons as it did on land – that: “Megalania prisca, the largest terrestrial lizard known, was a giant goanna (monitor lizard). First described from the Darling Downs in Queensland by Sir Richard Owen in 1859, Megalania lived in a variety of eastern Australian Pleistocene habitats - open forests, woodlands and perhaps grasslands. Megalania would have been a formidable reptilian predator like its relative the Komodo Dragon of Indonesia, and may have eaten large mammals, snakes, other reptiles and birds.”

Mythology.net provide us these insightful words on Megalania: "In many Aboriginal stories that have been handed down through oral record and cave paintings that have been discovered, it is suggested that some of these reptiles were capable of bringing fire and other destruction along with them. Additionally, the fossils of these creatures suggest they were not purely terrestrial creatures, but may also have aquatic abilities. This thought is supported by an Aboriginal tale that speaks of a Megalania Prisca who wandered into the ocean. The story claims that the Megalania Prisca happened to wander into the ocean and began to swim. While in the ocean, it was attacked by a Great White Shark and the two creatures began to fight each other. The Megalania was able to overcome the shark and dragged the carcass of the Great White back to shore. The story ends with the depiction of the Megalania feasting on the carcass of the shark."

Moving on, there are the words of Following the Nerd: "In 1890 in the village of Euroa, Victoria, a thirty foot lizard terrorized the villagers, resulting in a squad of forty men armed to the teeth going out to hunt it down only to find it had disappeared. They called it a monstrous goanna, something that the Aborigines recorded in their history as the horny-skinned bunyip goanna and it goes right back to the Dreamtime. Now a goanna is a name for a monitor lizard, but nothing the size of these things. Settlers to Australia were warned by the native people to beware of this variety of goanna. These could grow to thirty feet in length and had powerful jaws. To the people these really were dragons come to life and a threat like nothing they had ever faced." 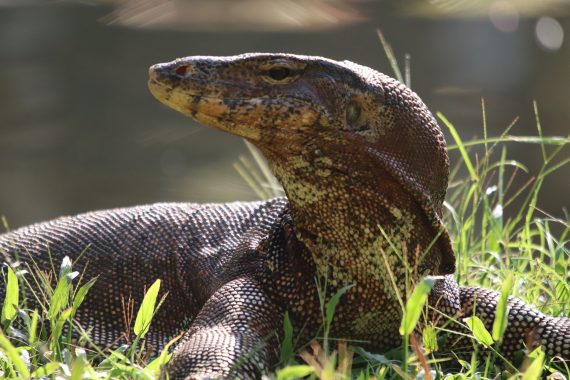 May 1899 was the period in which the Sydney Evening News got into the controversial matter of huge lizards. Its article was titled A Tale of Central Australia. It was written by a man named Ernest Favenc, who – as well as being a journalist – was a historian and explorer. Franc detailed in his feature a frightening confrontation between Aborigines and a massive monster-lizard known to the locals as the Gonderanup: "It was a brilliant moonlight night and the party were smoking after their meal, when they were startled by an agonised cry from one of the horses. There is no sound more startling and painful to hear than the semi-human cry of a horse in mortal pain and terror, and the men, starting to their feet, picked up their firearms, and hastened in the direction of the sound. One horse, a grey, was plunging frantically in its hobbles, rearing and uttering the terrified scream of pain that had startled them. As they approached they saw, clinging to the horse’s throat, with claws buried in the shoulders, and its jaws having a firm grip on the poor creature’s throat, what appeared to be a monstrous lizard. The horse, as they approached, stood still, trembling all over, but the horrible thing fastened on it never moved.

"Putting his carbine close to its head at an angle that would not hurt the horse, Murray fired. The claws of the thing relaxed, but the jaws never opened, and the frightened horse began turning round and round with the dead creature hanging on to its throat. Then it staggered, fell, and, with a shuddering gasp, died. The creature that had attacked it was, in fact, an enormous sort of lizard, with a huge disproportionate head. The iron jaws, armed with cruel teeth, still retained their death grip on the dead horse’s throat from which the blood was now pouring. While engaged in looking at it Dandy was seized in the side by another of the horrible creatures. Rafter, the other man, killed it, but not before it inflicted a terrible wound. Murray called to them to catch the horses and get away as soon as they could, for others of the brutes were coming. 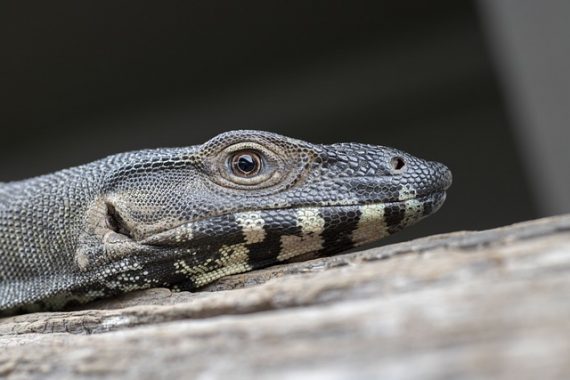 "Dandy could do nothing but stagger to camp; while Murray and Rafter ran after the horses to drive them up. Dandy heard shouting and shots, but the others did not come back. He heard another of the creatures crawling towards him, and, overcome with blind terror, he fled. Dandy and Rafter would soon die out there in the hot desert from the wounds inflicted by the Gonderanup. And of the horses that had been attacked, only their skeletons remained, the ferocious reptiles having picked the flesh clean. When they approached the camp all was silent. Martin shouted for Dandy, but got no answer. Poor Dandy was dead. The bite of the Gonderanup seemed to be fatal. Murray never would tell the whole details of his fight with the lizards on the bank of the salt lake… The subject seemed repulsive to him, and he swore that you could hack the bodies off the creatures, and their jaws would still remain fixed. They were not natural, he said, and old black fellows of that part who remember them say so too."

That was far from being the end of the story, however. Yet further accounts of these dangerous giants continued to surface. In January 1940, the Northern Standard newspaper (which covered the Australian city of Darwin) made significant page space for its readers. Indeed, the headline itself was: "Seeking an 18ft Lizard." It told of the ambitious, and maybe even dicey, plans of one Fred Blakeley. It was Blakeley’s plan to try and bring one of the giant creatures back alive. The journalist who wrote the article said: "He hopes to bring back one alive. He claims to be one of the few white men who have seen a giant Prenty. He describes it as a mammoth lizard about 18 feet from snout to tail-tip. Its claw tracks are about 6 feet apart. The claws are sharp and poisonous and inflict a wound which festers quickly and rarely heals. The giant Prenty, he says, attacks chiefly with its tail. It can fell an ox with a sweeping blow. It is faster than a crocodile and its gait resembles a gallop. The Aborigines call the Prenty a debil debil, Blakeley told the Northern Standard."

Does Megalania - or something similar - still exist? I'd say it's time for the ultimate expedition into those aforementioned subtropical rain-forests...