Nikola Tesla and the Death Ray

A long-running trope in the world of science fiction is the idea of an all-powerful “death ray,” a theoretical energy beam weapon that could cause mass damage and destruction. Anyone who has seen alien invasion films like War of the Worlds, or movies like Flash Gordon, Star Wars, and countless others will be familiar with the general idea, and it is mostly seen as just a cool fictional weapon, yet what many people might not realize is that since the 1920s there have been many inventors who have independently tried to create such a weapon, and to bring the death ray from fiction into reality.

Probably the first claim of a functioning death ray comes all the way back from 1923, when an inventor by the name of Edwin R. Scott made the bold claim that he had created a beam weapon that could instantly kill a person and take down aircraft. This was followed the next year by another independent English inventor named Harry Grindell-Matthews, who in 1924 actually tried to sell his invention to the British Air Ministry. He claimed that if his invention had access to enough power, it would be capable of stopping planes, ships, and infantry units from a distance of up to four miles. One article in the New York Times said of his sensational invention:

If confidence of Grindell Mathew, inventor of the so-called “diabolical ray:” in his discovery is justified it may become possible to put the whole of an enemy army out of action, destroy any force of airplanes attacking a city or paralyze any fleet venturing within a certain distance of the coast by invisible rays. 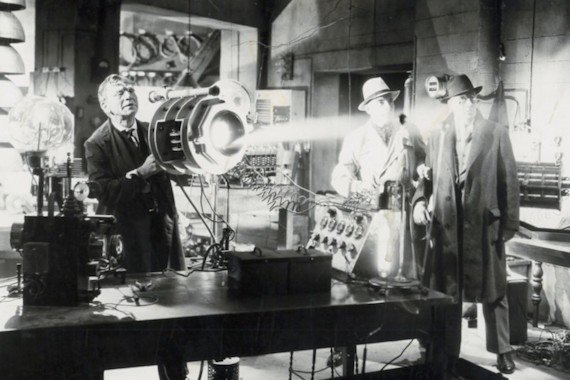 Matthews arranged several demonstrations of a prototype device to reporters, during which he was variously able to stop a motorcycle engine, arrest the action of magnets, ignite gunpowder or oil wicks, electrocute mice, and make plants wither from a distance, but this was seen as trickery by some skeptics, especially since he only ever offered demonstrations in his own lab and refused to explain how it all worked. He was never able to adequately show the military that it actually worked in the field, and so the Air Ministry ultimately backed away despite his threats to sell the plans to France. Matthews would later claim that he had successfully sold the plans to the United States, but it is unknown if he ever really created a full working prototype of his “diabolical ray,” and the alleged plans for it have never been found.

There were several other claims in the 1920s of death rays being developed, notably by the Soviets, who claimed that they had a weapon that could disable an entire fleet of ships or squadron of aircraft, but by far the most famous example of an inventor and his death ray comes is that of the great inventor Nikola Tesla in the 1930s. Tesla is known as being one of the greatest minds and inventors of the 20th century, especially in the areas of power generation, transmitting electric currents, wireless communications, and early X-ray imaging. Tesla’s revolutionary contributions to groundbreaking technology are too numerous to list, but one of his recurring areas of research was in developing a death ray, which he called “teleforce.” Interestingly, the inventor was actually quite against war, and claimed to be developing his weapon in order to provide such a deterrent that no one would want to wage it. His intention with the weapon, which he claimed could bring down aircraft, ships, and people instantly, was not to use it for war, but rather to eliminate warfare altogether, and what a weapon it was. Tesla would once say of it:

My apparatus projects particles which may be relatively large or of microscopic dimensions, enabling us to convey to a small area at a great distance trillions of times more energy than is possible with rays of any kind. Many thousands of horsepower can thus be transmitted by a stream thinner than a hair, so that nothing can resist. My invention requires a large plant, but once it is established will be possible to destroy anything, men or machines, approaching within a radius of 200 miles, and will provide a wall of power in order to make any country, large or small, impregnable against armies, airplanes, and other means for attack.

According to Tesla, this force would be able immobilize whole armies from up to 250 miles away, and it all worked through drawing power from the Earth’s ionosphere through the use of coils, and by 1937 he was claiming that he had actually built the device for real. However, by this time his funds were dried up, and although he approached several governments with his invention there was little interest in actually developing it, especially since Tesla was so secretive about how it worked and demanded that he have no interference as he did his work. In the end, he never did produce a working machine, at least as far as anyone knows, and any hope for it ever becoming a reality ended with his death in 1943. When news of his death got out, the U.S. government was so nervous that foreign agencies would get their hands on the plans that they searched his living quarters at the New Yorker Hotel, in Manhattan, where he had been living at the time, but no documentation could be found. Or at least, that is the official story.

Ever since then, there has been speculation that Tesla’s plans were found, and managed to get out into the wild, with the technology allegedly being used for several other death ray experiments throughout World War II and beyond into the Cold War, and indeed it has been suspected that high-energy beam weapons being developed by the U.S. military to this day are based on Tesla’s lost designs.

Of course, there is the distinct possibility that Tesla never actually really built it at all. After all, the plans were lost and as far as anyone knows he never built a functioning prototype, despite constantly promising that he was going to unveil one. Towards the end of his career, he was known for presenting all kinds of far-out ideas for inventions that don’t seem to ever have seen the light of day, and he was also plagued with mental problems during this time, so although he often touted his death ray all the way up to his death, there is the possibility that it never existed anywhere outside of his own head. Whatever the case may be, it is an interesting chapter in the history of people trying to develop weapons out of a science fiction story, and it doesn't seem as if we are ever going to really stop.

Fast Radio Bursts Are Coming From Four Galaxies Just Like Ours