The Bizarre Vanishing of a Filmmaker in the Wilderness

The wilderness seems to beckon people to join it at times. Here we see some of the most mysterious vanishings there are, with people who have just gone off into the trees to evaporate into thin air. These dark places at times have a habit of drawing the unwary in, and one very curious case is a respected filmmaker who suddenly ran out to embrace the woods, and never be seen again.

Terrence Shemel Woods Jr., of Capitol Heights, Maryland, had at the age of 26 years old made a pretty good success of himself as a filmmaker. Educated in England, he had worked on numerous TV programs and documentaries, including several that had taken him out into the rugged outdoors for shoots in such far-flung places as Turkey and Alaska, making him no stranger to roughing it. In 2018, Woods was working for a London based production company called Raw TV, which specializes in the outdoors and is perhaps best known for the Discovery Channel reality show Gold Rush. In October of that year he was enlisted to spend a few weeks in the remote wilderness of Montana and Idaho in order to work on a documentary for a British show called Whitewater, in this episode about the abandoned gold mine called Penman Mine, which lies within a place called the Nez Perce Clearwater National Forest, in the heart of north-central Idaho. Terrence was there with 12 other crewmembers and was reportedly in good spirits at first, but things were about to take a turn for the strange.

On October 5, 2018, the crew spent the entire day out at the mine filming. It was fairly isolated, rough and mountainous terrain, but all of them were quite experienced with this sort of shoot and it was nothing they couldn’t handle. Woods reportedly had been more quiet than usual that day, which most just chalked up to tiredness. As the crew began finishing up for the day, something very strange would happen, when Woods took off running for no apparent reason and just kept on running right off the face of the earth. The production manager who witnessed it all would later say in a statement to Woods’ father:

So we were finishing up for the day and your son was talking to one of the miners. I was in one of the vehicles doing some work when your son told the miner that he had to go relieve himself. Something told me, kind of like a gut feeling, to look over near the cliff your son was at, when I looked over there all I saw was the radio lying on the ground. I originally thought your son fell off the cliff so I leaped out of the vehicle and ran over there immediately. To my shock, your son was already 15 feet down the cliff running like a hare. I’ve never seen anyone run that fast. At that point I yelled to the crew to get in a vehicle and go to the main road. I proceeded down the cliff after your son but he kept running. Due to my professional SAR training, I stopped running after him out of fear he’d be further scared. So I went back topside and the crew hadn’t found your son on the main road. At this point we found the first house with a phone and reported your son missing.

When he made his sudden run into the wilderness, he was carrying his cell phone, but he left behind his two-way radio and a backpack containing his belongings. By the time authorities reached the area it was getting dark, and after a preliminary patrol of the area with no sign of the missing man, the search was started in earnest the following morning. The search teams used dogs, helicopters, and infrared cameras but were unable to find a trace of Woods, with even the dogs unable to pick up a scent. A fresh sheen of snow had also fallen, yet no footprints could be found, and it was claimed by a search team member that it was “as if he had never been there at all.” After a week of nothing the search was called off. In the meantime, some strange clues were turned up.

It would be discovered that, although he had planned to be in Idaho until mid-November, Woods had texted his father to tell him that he would be returning on October 10th, with no elaboration whatsoever, and it was even odder in that he had never been known to cut an assignment short. Some friends and family would also say that he had been acting uncommonly anxious about this trip in the weeks leading up to the shoot, and that he had expressed his desire not to go. This was all very unusual for him, because Woods had always been very enthusiastic about his work and the adventures it took him on. Not everyone is in agreement with this, though, and his older sister, Sharnia Tisdale, would say:

I talked to him before he went out there and he seemed fine. He was going to go out and do a job with the film crew and he was going to come home, nothing abnormal and he wasn't acting different. We talk all the time. He is not the type of person that would just run off or do anything like this, so it seems unusual to me but you know I wasn't there so I can only go by what they are saying. He's traveled around the world he really likes to do tv, he is a loving person and caring and an all around good person.

Also rather weird is that on the morning of the day of his disappearance he had sent his father creepy footage of a river flowing through a canyon without any explanation or discernible reason for doing so, and although nothing was thought of it at the time in retrospect it now seems a bit eerie. There also seemed to have been some disagreements between Woods and the production manager, although what connection this could have is unknown. 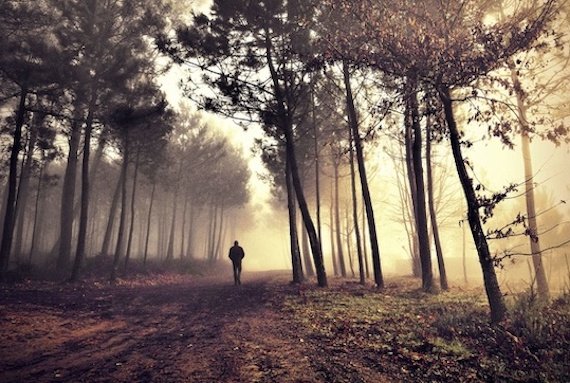 Flyers were distributed all around the region and volunteer searches orchestrated by the family continued, but no trace was found, and with the cold, snowy weather that had moved in there was little hope that he could have made it out of there alive. It was truly baffling, because Woods’ family would insist that he had never done drugs and did not have any mental issues or personal problems, making it all the more unusual that he should just suddenly bolt like that. While it is easy to see how someone could get lost in this treacherous and hostile terrain, what is it that made this normally rational individual just decide to suddenly drop everything and go running over a cliff to keep on going into that remote landscape to vanish into thin air?

One of the ideas postulated by the family is that he may have been scared of one of the crew members for some reason, to the point that he might have felt his life were in danger, but authorities have said there is no sign at all of foul play. In their opinion, he suffered some sort of mental break, and perhaps had even been planning on committing suicide out there, but this is not in keeping with his established character and mental history. Indeed, Woods’ father has accused the police of not properly pursuing the case due to racism. Another rather ominous scenario is that he was possibly murdered by one of the crew members, but there is no evidence of this at all and none of them have ever been considered a suspect. Other more fringe ideas are that some sort of paranormal force took him after luring him out into the woods, or that he passed through some sort of portal.

What happened to Terrence Shemel Woods Jr.? Why did he just suddenly decide to run off like that to join the annals of strange vanishings? Was this foul play, suicidal tendencies, a death wish, or something perhaps even stranger? To this day the case has never been solved, and it continues to haunt family, friends, and those who would seek answers.