Dawson, New Mexico, was once a thriving mining community but now it is nothing more than an abandoned ghost town that is rumored to be quite haunted.

The Dawson coal mine opened in 1901 and that was the beginning of what would become a booming mining town. The mine was purchased by the Phelps Dodge Corporation in 1906 and the town began thriving with a hotel, theater, hospital, bowling alley, baseball park, golf course, modern houses, and much more. It even had its own newspaper. In fact, at its peak in 1918, the mines produced 4 million tons of coal.

Unfortunately, tragedy struck not once but twice in a very short amount of time. On October 22, 1913, there was an explosion in the mine that killed 263 miners in addition to two rescue workers. Less than a decade later, on February 8, 1923, another explosion took the lives of 121 workers. The town of Dawson survived until 1950 when the mine closed and the Phelps Dodge Corporation sold the entire town with several buildings and homes getting relocated to other parts of the country.

At its height, the mining town housed about 9,000 people, but now pretty much all that remains is an eerie cemetery with more than 350 white iron crosses reminding those who visit the location of the heartbreaking memories of all who tragically lost their lives there. (Several pictures of Dawson, including the cemetery, can be seen here.) 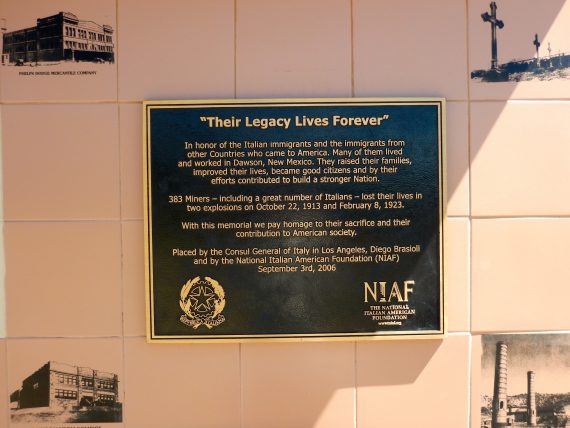 As for the paranormal activity, it is not surprising that it is considered to be quite haunted, especially with so many miners tragically dying in that town. As a matter of fact, Dawson is said to be one of the most haunted locations in all of New Mexico. Several people who have visited the cemetery (especially during the night) have claimed to have seen unexplained lights similar to those that are mounted on the front part of the helmets that miners wear while working. Others have witnessed ghostly apparitions walking among the headstones of where they were buried. Perhaps the miners are still hard at work digging for coal so many years after they passed away.