The Mysterious Ghost Lights of the Theater

Many of you reading this might enjoy a show now and again, be that a Broadway production or something smaller and more personal. People have loved the theater for centuries, and we still do. But did you know that after everyone has left, and the stage has been cleaned and no one is around, the theater descends into a deep darkness, all lights extinguished and the curtains and measures taken against sunlight making sure that this place is now like a tomb. That is,  except for a lone light piercing through the gloom, set there upon the stage and chasing away the clinging shadows, alone in its battle against the night and with many mysteries surrounding it.

They call them “ghost lights” or “Equity Lights,” possibly named after the Actors' Equity Association, and they are usually just a single bare low-wattage lightbulb placed at the center of the stage, propped up on a pole, either in a crude wire cage or as is, and which is kept on when all the other lights go off at night and everyone is gone for the evening. In more modern times the forlorn light will sometimes be an LED or CFL lamp, but whatever sort of light is used it is usually just one, and usually quite dim, just a barely perceptible eerie glow in the otherwise smothering total blackness of the unoccupied theater. For centuries nearly every theater group, from Broadway to Opera houses, to small travelling theater troupes has observed the tradition of lighting the ghost light every night, even though there is no specific regulation requiring it, and it is very rare to find one that doesn’t. But why? Stage producer Jim Dougherty has explained of these lights.

A bare bulb atop a rudimentary pole, it stands at center stage, lit by the last person to leave the theatre each night and extinguished by the first person to arrive in the morning. Though stark in statue and artless in form, the ghost light fulfills many functions…some practical, some supernatural. 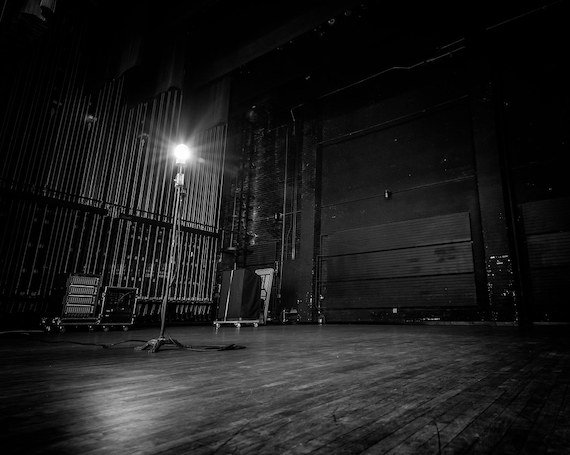 If your average theater goer were to ask one of the stagehands or actors why that light is left vigilantly burning, they are likely to get the standard response. They will probably be told that it is a safety precaution to keep people who wander into the theater at night from falling off the stage or tripping over set pieces and getting seriously injured, such as a late worker or even a trespasser. Indeed, a popular tale is that the tradition started when a burglar broke into a theater and fell off the stage to break his leg and go on to sue the theater. Another reason given is that it is so firefighters can see enough not to fall off the stage if they are called to the building. If you were to ask about the lights in the old days when gaslights were used, you might have been told that they were used to keep pressure from building up in the lines and causing an explosion, something that apparently happened quite frequently. This all seems to make sense, and is a perfectly rational reason for why that single light should be left on all night. Yet, there is another reason that is mostly only talked about among people in the theater profession, and that is that these lights are to keep all the damn ghosts away, or at least keep them happy.

It turns out that the common image of people in the business is that theaters are just absolutely crawling with ghosts, and they are often considered to be just about as haunted as you can get. The traditionally very superstitious theater crowd believe that ghosts hate a dark stage, and this will make them restless and even aggressive. If the light is kept on, the spirits of dead actors can come out at night and perform, which is important to appeasing them, and if not they get unruly. Interestingly allowing ghostly actors their stage time is also the reason that theaters close for one day a week. Ange Sullivan, Head of Lighting at the Sydney Opera House, says of the this

It’s an old theatre tradition. It’s something that’s been done around the world for decades, if not hundreds of years. They have two main functions. There’s a very practical reason first and foremost: The last person to leave the theatre and the first person to return can see the edge of the stage so they don’t fall into the orchestra pit. The second is more of a romantic idea, and one I like a lot more: Every theatre has at least one ghost, and when they come out at night we don’t want them bumping into scenery or disturbing props. If we leave a light for them, they can play on stage without disturbing any of our gear.

Another variation of the superstition is that the light is instead there to keep the ghosts away, and that these spirits will not come out as long as the light is lit. In this version of the tale, the light is meant to scare them away rather than make them happy and give them a chance to use the stage. Broadway stage manager Matt Stern explains of this:

The superstition around it is that theaters tend to be inhabited by ghosts. Whether it’s the ghost of old actors or people who used to work in the building, and ghost lights are supposed to keep those ghosts away so that they don’t get mischievous while everyone else is gone.

Whatever the reason may be, nearly every theater maintains the tradition. In fact, in some cases, a theater might be considered to be so incredibly haunted that they have tweaked the custom a bit by keeping more than one ghost light on. One example is The New Amsterdam Theatre, on Broadway, which is supposedly so haunted that a whole grid of ghost lights is kept on. The Palace Theatre, also on Broadway, is also so infested with ghosts that several ghost lights are kept on, and it even goes as far as to keep two seats in their balcony permanently bolted open so that ghosts can use them at night. It is all a very strange tradition, with origins that have become murky and little understood by even those within the theater business. And yet, every night, when all of the lights go out, that lone bulb burns bright, as it seems to have always done, and maybe always will.

Green Glow On Mars Observed For First Time On Another Planet