Across the world there are relics from the past that defy explanation and leave us with many questions swirling about, but few answers. These places are steeped in impenetrable mystery, their secrets long gone to the mists of time and forever seeming to taunt us with their enigmas. One does not need to go to the far ends of the earth or to places like ancient Egypt or South America to find such anomalies, and there is just such a mystery lurking out in the United States, which hints at wonders beyond our comprehension.

Found dotted throughout the countryside of Putnam County, New York, as well as in some areas of Connecticut, New Hampshire and Vermont, are over 200 mysterious man made stone chambers with origins shrouded in the fog of history. These chambers were made with no mortar at all, and were built using an ancient, Bronze Age architectural design commonly known as “corbeling,” in which piles of stones arch and curve inward to support the massive ceiling stones, which are enormous, very heavy slabs of rock. Some of the chambers lie underground, others are built into hillsides, some are quite large, with a few even sporting full double chambers, while others are barely big enough to stand up in. Despite these differences, they mostly all share some curious details. In every case the entrances are oriented toward the south, southeast or southwest, and align with equinox and solstice sunrises, with gaps in the walls that seem to be designed to let sunlight in. In addition, they are all made from large stones, they all have dirt floors rather than stone ones, and they almost always lie near a water source such as a stream, river, pond, or lake. However, that’s just about all we know about them. We don’t know who built them or why, with even their exact age a mystery, and so theories have swirled around them.

Perhaps one of the most popular theories is that the chambers were built sometime in the 1700s and 1800s and used by colonial farmers to store roots, meat, dairy products, and vegetables. This is supported by the fact that many of them are located on old colonial era farms, and the low humidity and temperatures within the chambers compared with outside world seems to make them suitable for storing various perishables. However, many disagree with this assessment. While these past farmers most certainly knew of the chambers, there is no solid written evidence that they actually built them or used them as cellars, and indeed any mentions of them at all in the records are scant. They also tend to lie in areas that are sloped and would be impractical and difficult to access as mere cellars, and some are in areas with poor farmland to begin with. There is also the fact that these chambers seem to be designed to let in light from equinox and solstice sunrises, and it seems unlikely that they would go through the backbreaking work of moving all of those massive stones just to have a basement for storage. Local historian Chip Marks has said of this:

They’re not root cellars. Not by any stretch of the imagination. While buildings erected by settlers and colonists had straight walls, chamber walls are corbelled like igloos. If you were a settler … you’re carving a homestead out of the forest. You’re going to put your effort into building a house and a barn — not a root cellar that required the movement of massive pieces of rock. And most roots cellars would have been in the house.

Another theory is that these were built by ancient Native Americans up the 10,000 years ago for spiritual purposes, or as winter burial chambers or sweat lodges, and yet a more bizarre theory is that these structures were built by pre-Colombian ancient explorers, perhaps Celts or Vikings. In this scenario, the chambers are the remnants of these early forays into the New World. One idea is that ancient Celtic Druids made it to these shores and used the same technologies used to make Stonehenge and other similar sites, and that they served as places of worship and ritual, celestial observatories, lunar calendars, places to celebrate the seasonal solstices and equinoxes, for religious or ceremonial purposes, or a combination of all of these. The idea here is that, while colonial farmers may have found and used these chambers, they are much, much older than that.

One piece of evidence of this was a hand knife found in one of the chambers that was of the same type used by the Druids, and there have been claimed to be inscriptions of symbolic markings within some of the chambers believed to be Celtic in nature, as well as engravings using what looks like an ancient Celtic alphabet used between the fourth and 10th centuries called Ogham. This would also explain the use of such ancient construction techniques and the astronomical alignment of these structures. However, there is very little solid archeological evidence to support the pre-Columbian explorer theory, and indeed there are very few pieces of pottery, bones, tools, clothing fragments, or anything else left behind to give us a clue as to whether an of this is true. 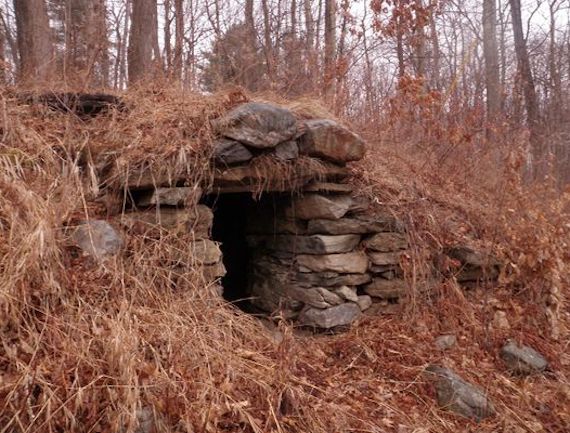 Even more fringe theories have also been offered about Putnam’s stone chambers. One strange finding made in some the chambers is that they seem to have an effect on magnetism. In the 1990s, a geologist by the name of Dr. Bruce Cornet went to the chambers armed with a device to measure magnetic variations and he came to some shocking findings. He would say of this:

They are the strangest readings I ever got in this area. It was strong enough to reverse a compass. Each stone chamber had a significant magnetic pull right in front of the door. This magnetic anomaly is a true clue that they are much older than the early colonists.

Why should this be? No one really knows. Whatever these chambers may be and whoever may have built them may forever pose a mystery for us, but one thing that is certain is that they need to be preserved. Many of the chambers have collapsed or been damaged by vandals over the years, and in other cases the wilderness has moved in to try and reclaim them, with trees and weeds overrunning them. In other cases, chambers have been bulldozed over or buried in order to make way for construction projects, and it seems if nothing is done then these mysteries will never be revealed and the chambers will die off as surely as the ones who made them. In the end, the stone chambers of Putnam are a curious little historical anomaly that has never been fully solved, and one can only hope that they are around long enough for us to come to the answers we seek.