What exactly happened to the lost colony of Roanoke is one of America’s oldest unsolved mysteries but according to new evidence, it may have finally been solved. In 1587, a group of 115 English settlers arrived on the Outer Banks of North Carolina called Roanoke Island. They began a new life in the United States, but just three years after their arrival, the colony was completely abandoned.

While it’s not entirely certain what exactly happened to the colonists, there is some speculation that they traveled inland or that maybe they relocated to Hatteras Island. The colonists on Roanoke Island carved the word “Croatoan” into a wooden post in reference to the Croatoan tribe that lived on Hatteras Island. It’s still unclear as to why they carved that word into the post – was it to let others know that they moved to Hatteras Island to live with the Croatoans or that the tribe attacked their settlement? The colonists were told to carve a Maltese cross into a tree if they were attacked or forced to leave the island, but no cross was ever found so an attack or battle seemed unlikely.

Scott Dawson, who is a hobby archaeologist and from Hatteras Island, has heard many stories over the years about the missing colonists. “I saw a lot of artifacts coming up when people were building houses or sometimes from erosion from storms,” he said, adding, “It gutted me to see that no one was doing anything about it.” So that’s when he decided to start the Croatoan Archaeological Society in an attempt to find evidence that the colonists did in fact move to Hatteras.

Dawson reached out to British archaeologist Professor Mark Horton from the University of Bristol who was very interested in helping out. “I think it’s a really interesting point, you know. Why are a bunch of Brits working on the site in North Carolina? I suppose the answer is it’s our history and heritage as much as it is yours. It’s part of that shared story,” he stated, adding, “I’ve been excavating 16th-century sites in England for a very long time and thought, well, maybe I could bring a new perspective on this problem because we know what this stuff actually looks like.”

They have been performing excavations since 2009 and have found thousands of pretty interesting artifacts including several items from the 16th century – the same time frame that the Roanoke colonists arrived on the island and later went missing. Sword handles, copper rings, earrings, glass, writing slates, and a Nuremberg token were among the items found. (Several pictures can be seen here.)

So, why did the colonists go to Hatteras Island? Horton believes that it makes a ton of sense for them to have relocated there. “When these colonies become abandoned, you get massive political eruptions and disagreements and people walking out and things,” he stated. “So it’s not unlikely that one group might have gone up the Chesapeake, up the Albemarle. But I’m pretty confident one group at least, probably the pretty substantial part, came out to Hatteras Island.” He went on to explain, “To go out to the point of the Outer Banks where you can see vessels passing by most easily.” “We know that the Native American communities there were friendly. It was a good place with one’s allies in a place where you could potentially be rescued.” 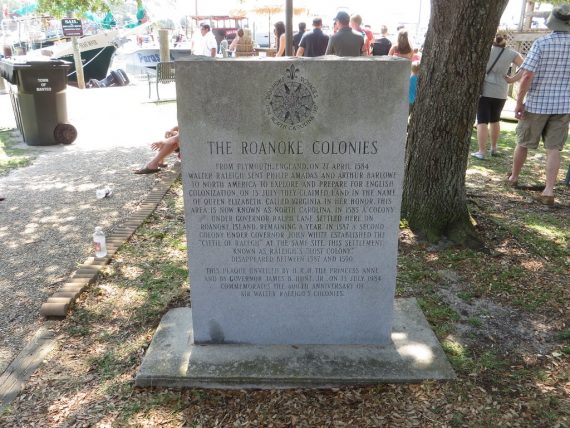 Dawson believes that they have found the “survivor’s camp” where the Roanoke colonists would have lived when they first arrived on Hatteras Island and before they aligned with the Croatoans. They were planning on excavating the site this spring but the date had to be pushed back to next year because of the coronavirus pandemic. Dawson detailed his findings in his new book called The Lost Colony and Hatteras Island.

It will be exciting to see what they find when they’re able to excavate the site of the possible “survivor’s camp”.