The Strange Mystery of the Wanggongchang Explosion

Throughout our known history there have sometimes been strange booms and explosions that seem to have come from nowhere, and have usually faded into time without an answer. These events seems to truly terrify those who have witnessed them during those eras, yet we are usually left with little information to go on and forced into the limbo of speculation and mystery. By far the most well-known mystery explosion is the one known as the Tunguska event, in which a massive blast rocked the Eastern Siberian Taiga to flatten trees over an area of 830 square miles on June 30, 1908. It’s cause still poorly understood, it is the most notorious and indeed the largest of these enigmatic explosions, but considering the remoteness of the terrain the only casualty was an estimated 80 million trees. Although Tunguska is the most famous, there are other mystery blasts that have occurred over recorded history, some of which were mush deadlier and in populated areas. One of the more obscure, yet perhaps the most devastating was one that occurred in China in the 17th century and is still not fully understood.

The location of this strange  and violent event is the Ming capital Beijing, during the during the late reign of Tianqi Emperor. On the morning May 30, 1626, the otherwise calm, clear day was reportedly interrupted by a deep rumbling noise that gradually became more of a roar that startled people all over the city. This was then followed by what felt like an earthquake, which shook the earth and rattled homes and other buildings, before a bright flash was supposedly seen in the sky, and this was followed by an immense thunderous boom that would be heard for hundreds of miles and which would later be described as a boom that “shattered the sky and crumbled the earth.” With this loud boom, an area of about 1 square mile of southwestern Beijing just ceased to exist, completely and utterly annihilated by a mysterious, massive blast that disintegrated houses, sent plumes of smoke into the air and debris to go raining down for miles around, moving outwards in a ring of destruction.

When the smoke cleared, more than half of the city had experienced crippling damage, an estimated 20,000 people were dead, including Tianqi Emperor’s own son and only heir, Crown Prince Zhu Cijiong, and thousands of houses had been completely flattened or blown to pieces, leaving behind unprecedented obliteration that affected the entire city and surrounding area. It would turn out that the gigantic explosion had been so vast that it had completely uprooted trees to send them hurling out into the countryside, and had launched a 3-ton stone lion completely outside of the city. People apparently had heard the blast from up to 30 miles away, and across the surrounding countryside witnesses reported being pelted by debris and fragments from the city that caused them to cower in their homes. The shockwave and tremors from the potent blast had been felt up to 150 km away, with some areas experiencing damage from the quakes and even deaths, all testament to the incredible power of the explosion.

In addition to the sheer, breathtaking force of the blast, there were myriad odd details. In some cases, the falling debris was bricks, body parts, rocks, and wood, but other things were harder to classify, such as a rain of rice grain-sized pieces of molten metal that fell over the area of the Xi'an Gate, their origins unknown. Some reports also mentioned the clouds above the city as being oddly shaped and multicolored after the explosion, and there were descriptions of what sounds very much like a mushroom cloud being seen rising from the city during the catastrophic event. Also strange was the state of the bodies of many of the victims. The bodies of the dead had in a shocking number of cases been sent up into the air to land miles away, and oddly many of the victims were found to be naked, seemingly having had their clothes completely stripped off, the clothing then raining down in other areas, yet no burns were found on either the bodies or the clothes. Indeed, there seemed to be little fire damage at all anywhere, all very bizarre considering the magnitude of the explosion, now estimated as perhaps having released as much energy as the Hiroshima atomic bomb, or about 20,000 tons of TNT. 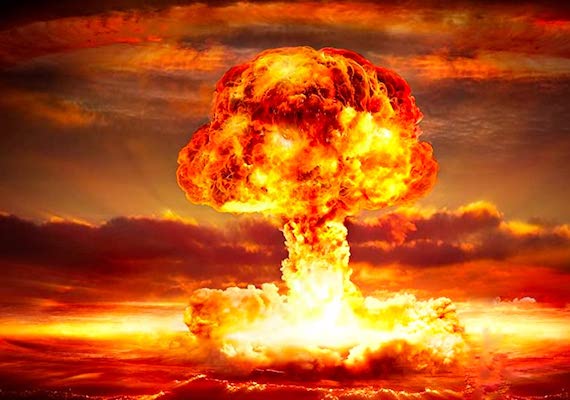 One of the earliest ideas was that is was an accidental gunpowder ignition at one of the city’s six armories. It was during a tumultuous era, when the capital was often under threat of attack from enemy forces, notably the Manchus of Northeast Aisia, and so one of the keys to protecting the city was the several vast armories kept in the area, which produced gunpowder and stored armor, firearms, bows, swords, and cannons. Administered by the Ministry of Works, these were integral to defense of the capital, and among them one of the largest of these facilities was the Wanggongchang Armory, located in what is now the central Xicheng District of Beijing and calculated to have been ground zero for the blast, with some witnesses later even reporting that a trail of smoke had been seen coming up from the factory in the moments before the blast. Considering this, it seems a simple explanation, yet the site purportedly completely lacked fire damage, and indeed the damage seems to have been concussive more than combustive. It is also thought that even if all of the gunpowder on site had gone off it still would not be capable of generating the sheer intensity and nuclear blast levels of destructive energy that was seen, and gunpowder also doesn’t really explain the increasing rumbling heard before the actual explosion.

If it wasn’t the result of exploding gunpowder, then what else could it have possibly been? Another popular idea is that the culprit is basically the same one thought to have caused the Tunguska Event. It is thought that both events might have been caused by what is called a bolide, or basically a meteor that explodes in mid-air. In this case, the armory being destroyed was just a coincidence, and the real culprit is a meteor that came in and exploded above it, sending out a destructive air-burst. This would explain the vast area of damage and the concussive nature of it, as well as the rumbling preceding the explosion, the bright flash seen in the sky, and the molten metal that was claimed to have fallen. Other possible causes that have been variously discussed are that it was a natural gas explosion, a volcanic eruption, an earthquake, or even a tornado, but none of these really explain all of the oddities permeating the event. More fringe theories include some sort of atomic weapon, an exploding UFO, or the work of aliens, and for many of the superstitious locals at the time this was all the wrath of angry spirits or gods. At the moment no one really knows, and it seems that the final answer is ultimately lost to the mists of history.

Don’t Wear Them! The World’s Most Cursed Gemstones (Part Two)