The Strange Tale of the Father of Fake Ghost Photos

Nowadays, pretty much every photograph of the paranormal or UFOs comes under tough scrutiny. Our photographic technology has come so far, people have become so crafty, and there are so many fakes out there that it is hard to know really what ones might possibly be real and so the gut reaction is to scream "fake." While this may seem to be purely the realm of the digital age with all of our photoshop and modern trickery, it might surprise you to know that people have been pulling off bogus ghost photos for a very long time, and here we will look at perhaps the first.

Although most people may think of doctoring or “photoshopping” photographic images as a relatively modern thing, the truth is this has been going on for a very long time, back to the 19th century. For almost as long as photos have been around there have been attempts to alter or modify images through various methods, and this can be seen particularly dramatically with the rise of the spiritualist movement in the 1800s, when this trickery turned to ghosts. This was at a time when people began to embrace the idea of life after death and the existence of ghosts and other spirits, and they actively sought ways to communicate with these forces or to capture evidence of them. It mostly started off as mediums allowing ghosts to speak through them, séances, and raps on the walls and tables, but this would also inevitably evolve to make its way into the visual medium and the growing world of photography.

By the 1860s, the spiritualist movement was in full swing and séances and spirit mediums were all the rage, drawing in everyone from the common person to society’s elite, and it seemed that every street corner had some sort of spiritualist enterprise going on. It was at this time that a humble photographer by the name of William H. Mumler started to make waves from his studio in Boston. Mummler wasn’t even really a professional photographer, but rather a chemist and silver engraver who was trying his hand at the still new and budding field of photography. He began making claims that he had developed a technique to actually take photographs of the spirits of the departed, allegedly first discovered when he had accidentally taken a picture of his dead cousin. Once he figured out how to reproduce the effect, he began making claims that he could routinely photograph the ghosts of dead relatives and celebrities, and presented as evidence a collection of such images. 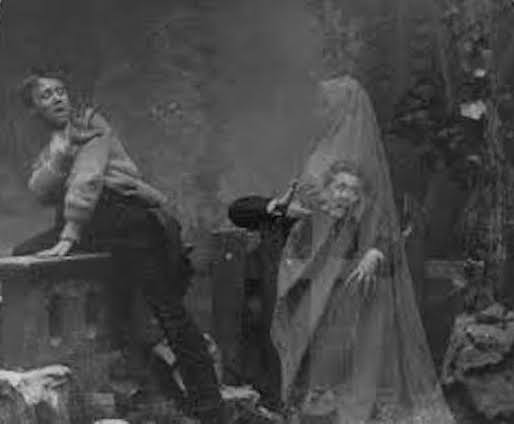 Considering this was a time during which Spiritualism was in full swing, photography was new and little understood, and ghosts had never really been photographed before, when word got out that Mumler could photograph ghosts he became famous very quickly. He began receiving a deluge of customers from all over the country, many of them people who had lost loved ones and wanted to have their photos taken with them. Mumler was more than happy to comply, for a healthy fee of course, and customers were left amazed and in awe when, sure enough, the eerie ghostly images of their dead family and friends would show up in the photos next to them or behind them. It all was an absolute sensation at the time, the ability to capture the normally invisible ghosts on film something no one had ever really done before, and Mumler was making a fortune off of it. People who looked at these photos usually came away baffled about how they could be done, but in reality it was most likely merely a photographic trick that is well known today but lesser known back then when camera technology was still in a nascent state, called a “double exposure.”

Mumler had discovered this technique quite by accident, when he unknowingly took a picture of himself over a used negative and was shocked to see a second person in the developed print. He soon realized what had happened and went to work trying to exploit this quirk to make a buck off of the Spiritualist movement and all of the grieving families of the Civil War dead. Typically, he would take a glass photographic plate that held the image of the dead person in life and simply place it over a new glass plate meant to hold the image of the customer. When the photo was then developed the two images would be fused together into a composite and voila, ghost photo. On many occasions Mumler did not have access to an actual photo of the deceased, and so he got creative, using other figures that were blurred just enough that the client could believe that it was the presence of the lost loved one, easy enough to do with a bereaved, gullible person who is willing to do anything to see them again. 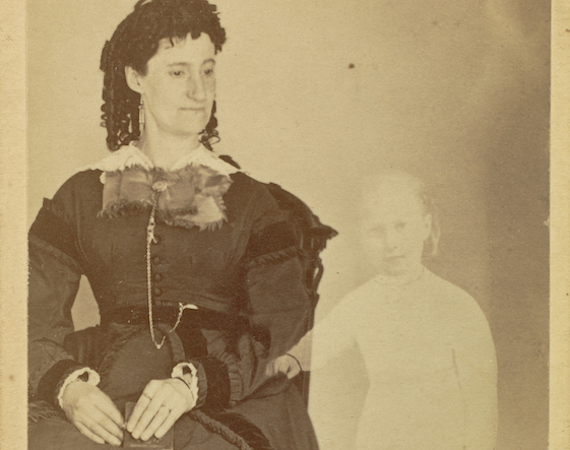 Although this technique had been used long before Mumler discovered it, the common populace was unaware of this, and since the use of double exposures to doctor photos was pretty new in the already new invention of photography and hadn’t really been done to fake ghosts, most people fell for it hook, line and sinker. Of course there were skeptics, most notably the great showman PT Barnum, who knew what he was up to and thought he was duping these poor people in mourning, and also made accusations that Mumler was probably even breaking into his clients’ homes to steal family photos for his work. However, the vast majority of people who knew of him believed Mumler was the real deal, and he got away with it for years, making him not only one of the earliest ghost photographers, but also the most well-known and successful. He would typically charge between five and ten dollars a session, which was huge amount of money at the time. The profitable nature of it all would start a whole trend and slew of copycats who wanted to cash in, using various techniques of superimposed negatives, double exposures, and composite images to create the same effect, but Mumler was the original and most established.

Mumler might have been able to keep this going for many more years if he had been a little more careful. He started producing ever more outlandish ghost photographs, including even one of the dead president Abraham Lincoln photobombing a picture of his wife Mary Todd Lincoln. When some of these “ghost photographs” began accidentally turning up the ghostly images of people who were still very much alive, the gig was up. Mumler was brought to trial for fraud, during which his nemesis PT Barnum even showed up to produce his own doctored image of himself posing with Abraham Lincoln. Although Mumler was eventually acquitted, his reputation was in tatters and he would never recover his spirit photography business. He would nevertheless go on to continue a successful career in the field of the chemistry of photo development, and even created the “Mumler process,” which allowed the first ever photographs to be printed in newspapers and revolutionized journalism. 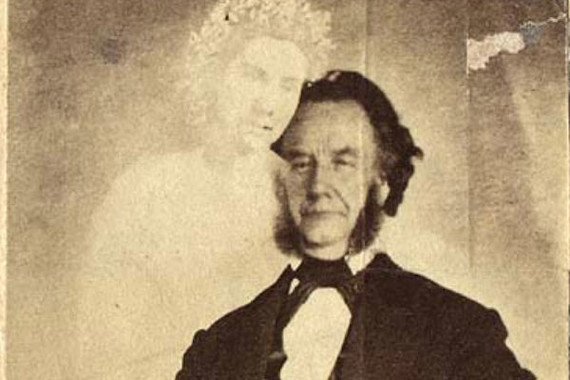 Amazingly, even with the very public debunking of Mumler’s work, spirit photography remained very popular among the masses, spawning more like him such as English Spiritualist photographer William Hope. The field was still going strong, having such famous proponents as Arthur Conan Doyle, who wrote a whole book on it called The Case for Spirit Photography (1922), even as equally well-known detractors like illusionist Harry Houdini railed against it all. As more people began owning cameras, alleged pictures of ghosts and spirits became more commonplace and en vogue. It would stay popular all the way into the 20th century, but the practice declined as more and more spirit photographs were exposed as frauds and hoaxes.

But has it really disappeared? Even in this day and age there are some who are intent on faking ghost photographs, and paranormal sites are peppered with them, often creating much confusion and debate. For every potentially real image there are many fakes, and it has gotten to the point where photographic evidence is all but useless, all of it becoming an ink blot test for us to pore through, and muddying the waters for any pictures that might possibly be real. Yet this is not a new thing, and so now if you ever see a photo of a ghost and scream “FAKE” you know where it all started.

The Story of Yankee Jim and the Haunted Whaley House