The Weird Story of the Ghost Army of World War II

As World War II blazed across the earth and the juggernaut that was the Axis forces laid waste to vast swaths of Europe, many of the Allied countries began to try and think outside of the box. These were tense times, in which they were often up against a seemingly unstoppable enemy, so on some occasions the Allies were forced to get creative. There are numerous weird schemes that were thought up or carried out by Allied forces over the years of the war, including bat bombs, pigeon guided missiles, and bomb laying dogs, as well as using cadavers as spies, and even parachuting dog soldiers. Yet one of the oddest was the time the U.S. built an army of inflatable tanks, special effects and actors to battle the enemy in truly clever ways.

Put together in 1944, the U.S. Army unit was called the 23rd Headquarters Special Troops, and their mission was simple. They were going to be a mobile, multimedia, tactical deception unit that would attempt to deceive, mislead, intimidate, and trick the enemy using various deceptive techniques to impersonate real troops to draw enemy fire, scare troops away, and obfuscate real troop movements. This was a unit in which creativity was prized, and to this end rather than enlisted soldiers, they focused on recruiting artists, architects, actors, set designers, and engineers, all handpicked from places like art schools and advertising agencies, and among their ranks were also real Army personnel pulled from the ranks of 406th Combat Engineers (which handled security), the 603rd Camouflage Engineers, the 3132 Signal Service Company Special, and the Signal Company Special as support.

To carry out their ruse, the unit, also called the “Ghost Army,” had an elaborate bag of tricks. They wore fake uniforms with fake insignias, and their equipment was not real weaponry, but rather inflatable tanks, fake artillery and aircraft, an idea that the Americans had gotten from the British in 1942, when they had successfully used a similar tactic in the battle of El Alamein under the code name “Operation Bertram.” The inflatable toys they had in their arsenal included tanks, cannons, jeeps, trucks, and airplanes, all filled with air through the use of special compressors and which with training could all be set up within a few hours. These fake vehicles and weapons were so meticulously designed and looked so realistic, with even tread marks being created for the fake tanks, that from a distance or from the air they appeared as indistinguishable from the real thing.

All of this was given an added layer of realism through giant speakers that would blare out recordings of the sounds of a large infantry unit or an airfield, which could then be remixed and changed on the fly to fit the particular situation. All of this had the ultimate goal of making the fake force seem like a formidable real one, and to make the unit, which only had 1,100 men, seem much larger than it really was. They even went as far as to drive real trucks amongst the fake ones with just two soldiers sitting in the rear to simulate the effect that it was full of men, and real artillery and vehicles were interspersed amongst the fake ones for added realism. The unit even went as far as to create fake radio transmissions that mimicked real operators from real units and gave bogus information, as well as utilize special effects such as smoke and light flashes to complete the illusion. Rick Beyer, who wrote a whole book on the unit entitled The Ghost Army of World War II, says of the unique unit:

The mission of the Ghost Army, which was officially called the 23rd Headquarters Troops, was to basically pretend to be other, much larger Army units, to fool the Germans about the location and size of those units. So they had all sorts of tricks up their sleeve. They had inflatable tanks, trucks and artillery to fool enemy air reconnaissance. They had sound tricks so they could make it sound like columns of trucks and soldiers and tanks were moving in at night. They had fake radio. And they also had “special effects,” so they set up phony headquarters, they wore patches of the units they were impersonating, so that all of these messages would tell the enemy who might be listening in on the radio, watching, or having their spies there, who said the 75th Infantry Division was there, when in fact it was somewhere else 10 miles away. 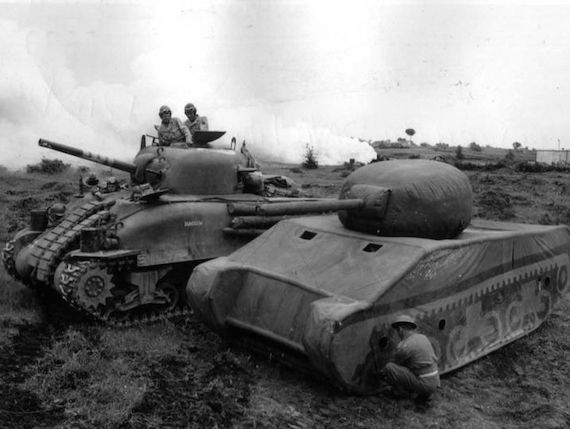 It was all an extremely sophisticated and elaborate ruse, and after being mobilized at Camp Pine, New York, the unit shipped off to Europe in order to see if any of this was going to work. In early May of 1944, just before D-Day, the Ghost Army landed in the UK near Stratford upon Avon, and quickly began their secretive work starting in Normandy, and working throughout France and the Rhine Valley, often operating dangerously close to the front lines. Perhaps their most famous feat was in March of 1945, when the unit simulated two infantry divisions of 40,000 men just south of a planned American attack across the Rhine river tricking the Germans into thinking that was where the attack would come from even as the 30th and 79th infantry units snuck across the Rhine with almost no resistance. By the end of the war the Ghost Army would engage in 22 different missions to varying degrees of success, in the process losing some of their men but saving perhaps tens of thousands of lives through their various displays of brilliant trickery. Beyer says of their ultimate impact on the war:

I don’t think the Ghost Army won World War II single-handed. I think we would’ve won pretty much the same way without them. I think their legacy is in lives saved. Probably they saved thousands of lives by fooling the enemy about where a battle would take place and giving American soldiers an extra advantage. And I think that legacy is summed up by what one soldier said, which was: “If one mother or one new bride was spared the agony of having to put a gold star in their front window, that’s what the 23rd Headquarters Special Troops was all about.

After the war, the survivors of the entire 23rd Headquarters Special Troops were sworn to secrecy, their bag of tricks hidden away, and the whole operation was labelled as classified. Many of the men involved would go on to successful careers in the art world, such as the famous fashion icon Bill Blass, photographer Art Kane, and artist Ellsworth Kelly. For decades the exploits of this creative band of brave men were forgotten and swept away until 1996, when the government declassified the project, although some of it remains top secret. It is all a very wild ride in the history of World War II, already populated by weird tales from both sides of the conflict, and an off-beat historical oddity.

Where’s Cleo? Experts May Have Found Location of Cleopatra’s Tomb