Titan is Mysteriously Slipping Away From Saturn at a Fast Rate

There are two things you can count on besides death and taxes – the Sun and the Moon … unless you’re on Saturn. While the Sun, feeble as it might shine on Saturn, isn’t going anywhere, its largest moon, Titan, is pulling away from the planet at a rate 100 times faster than astronomers think it should. Will Saturn lose its largest and most interesting moon? Can Earth pick it up?

“Tidal friction within Saturn causes its moons to migrate outwards, driving them into orbital resonances that pump their eccentricities or inclinations, which in turn leads to tidal heating of the moons.”

“Pumping your eccentricities” is not a good thing for humans to do, and now it seems it’s bad for moons too, at least in the case of Saturn and other large gas giants. In a new study published in Nature Astronomy, scientists use data from the Cassini–Huygens spacecraft – which mapped Titan's surface by radar starting in 2004 and continuing well beyond its planned completion in 2008 (Cassini finally crashed into Saturn in 2017) – to study the orbital expansion of Titan. While Earth and its Moon have a push-pull relationship with Earth domination, Saturn gaseous state give it less influence over its moons, causing them to move away – a little understood process. (Earth’s Moon is moving away too, but very slowly.)

Jim Fuller, assistant professor of theoretical astrophysics at Caltech and study co-author, explained in the NASA press release that he predicted four years ago that Titan is moving away much faster than expected. Two teams (from NASA, ESA and the Italian Space Agency) were formed and applied different techniques to measure changes in Titan’s orbit over ten years to test his theory. One used astrometry, which compared Titan's position in relation to stars and planets, while the other used radiometry, which used electromagnetic radiation to calculate Titan’s gravitational pull.

"By using two completely different datasets, we obtained results that are in full agreement, and also in agreement with Jim Fuller's theory, which predicted a much faster migration of Titan."

Paolo Tortora, study coauthor and professor of aerospace systems at the University of Bologna in Italy, gave the results -- Titan is moving away from Saturn 100 times faster than previously thought -- about 4 inches (11 cm) per year. For comparison, Earth’s Moon is moving away at 1.5 inches (3.8 cm) per year. One conclusion from this is that Saturn’s rings and moons all started out much closer to the planet and are moving away faster than once believed. This will eventually help scientists put a timeframe on the entire process and better understand it. 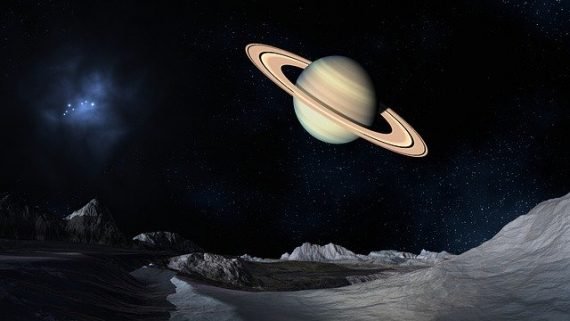 At 4 inches per year, Titan is a long way from escaping Saturn’s gravity, but it’s certainly possible. What happens after that? While it has never been seen in any solar system, a report in 2019 studied the idea and dubbed escaping moons “Ploonets” – predicting they would enter their own orbit around their star. That’s probably what will happen to Titan and the Moon. It may not affect Saturn, but this will be catastrophic to Earth – if it wasn’t a catastrophic event that sent the Moon on its way in the first place.

Yes, Ploonets would be a great name for a band and "Pumping Your Eccentricities" a great idea for a song.