Uh-oh! Animals are Fleeing to the North and South Poles

The word “exodus” comes from the Greek ‘exodos’ which means ‘the road out’. However, when it’s time to get out of town, most people will take any way possible – by land, by air and by sea. Most animals too, as researchers have recently discovered. A new study of world habitat shifts among more than 12,000 different species of animals, plants, fungi and bacteria found that a large majority of them are heading for the North and South Poles at rates never before seen, with marine animals making a veritable underwater sprint for colder waters. Why? Do we really need to ask?

“There is mounting evidence of species redistribution as climate warms.”

When that’s the opening line of a new scientific study in the journal Nature Ecology & Evolution, you know it’s not going to be good news. (Then again, is there ANY good news these days?) Researchers led by Jonathan Lenoir and Romain Bertrand of the Université de Picardie Jules Verne in Amiens, France, compiled a database of over 30,000 species range shifts -- permanent moves of an entire group of animals from one location to another. They then linked these range shifts to isotherm shifts -- an isotherm is a line connecting points on a map that have the same temperature.

“In the review, amphibians were found to be moving up slope at over 12 metres a year, while reptiles seem to be headed towards the equator at 6.5 metres a year. Insects, which incidentally carry many diseases, were found to be moving poleward at 18.5 kilometres per year. Relatively, that's a lot, but in the bigger picture, marine species were moving towards the poles at an average pace of nearly 6 kilometres per year, while land animals were only shifting upslope at a mean pace of nearly 1.8 metres per year (slightly faster than previous estimates for land species, but still comparatively slow).”

It's no surprise that animals, like humans, have a temperature range preference that they will move to stay within. It’s also no surprise that climate change is a major driving for in temperature ranges moving north or south. What surprised the researchers was the rapid movement by marine animals in comparison to land creatures, since the temperature shift should conceivably be moving at the same rate across land and sea. (The fast movement of the insects didn’t seem to bother them.) According to ScienceAlert, they speculated that marine animals are cold-blooded, making it harder to adapt to temperature changes, and water has less physical impediments than land (mountains, lakes, buildings, humans), allowing them to complete the move quickly.

"These complex interactions need to be accounted for to improve scenarios of biodiversity redistribution and its consequences on human well-being under future climate change."

Climate change is moving the warm bands of isotherms towards the poles, causing the melting of ice as well as the movement of animals. The shift in marine animals is already affecting the fishing industry, but that’s not the most dire consequence humans need to deal with. The Permian-Triassic Extinction was the most calamitous event in Earth's history – causing the extinction of 96% of all marine species, 70% of terrestrial vertebrate species and over three-quarters of all insects. While the cause of that global climate change event is still unknown, the effect is not, and the evidence shows that species tried but were unable to shift habitats fast enough. The researchers admit their sampling is small, not the entire collection of species, but they expect the same results when it’s expanded. 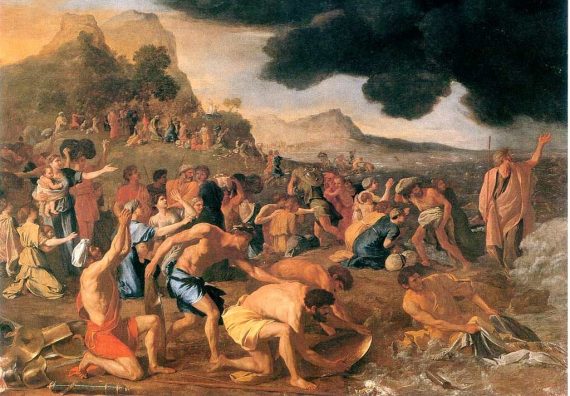 The most famous exodus ended well enough to get a biblical book named after it. The current exodus to the poles may not – for animal nor for humans.

Can we change it before another Book of Exodus has to be written?

The Hazards of Ufology, Part 1: Paranoia and Isolation