A massive asteroid shower hit Earth and the moon 800 million years ago that bombarded the planet with 40 to 50 trillion metric tons of meteoroids. In fact, it was so massive that it was believed to have triggered an ice age.

According to a new study from Japan, researchers studied 59 craters on the moon (each of them measuring at least 12 miles wide) by analyzing data from the Japanese lunar orbiter spacecraft Kaguya. They studied the rings of rock that were thrown by meteors hitting the moon in order to determine when the impacts happened.

They also studied the Copernicus crater (which is 57 miles wide) where rock samples were collected by Apollo astronauts. The researchers conducted radioisotope dating tests on the rocks that were ejected from the crater during the impact as well as from other craters on the moon and they determined that they were formed approximately 800 million years ago during a massive asteroid shower. 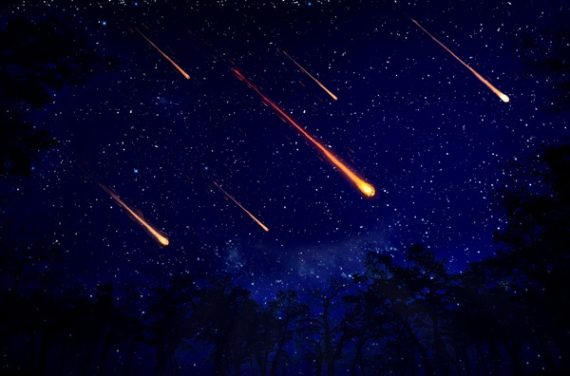 While it is believed that the asteroid shower would have also rained down on Earth, it’s hard to know with guaranteed certainty as many of the impact craters that occurred prior to 600 million years ago have been erased over the years because of geological activity such as volcanism and erosion. Assuming that the asteroid shower would have affected Earth as well, scientists have estimated that between 40 and 50 trillion metric tons of meteoroids would have rained down on our planet. For comparison, that would have been 30 to 60 times the mass of the Chicxulub dinosaur-killing asteroid that hit the planet 66 million years ago. It also would have sent 100 billion metric tons of phosphorus across the planet which is approximately ten times more than all of the phosphorus found in our oceans today.

The asteroid shower may have triggered an ice age on Earth as the impact would have happened not long before the Cryogenian period where the entire planet was thought to have been covered in ice. Asteroid impacts are known to affect the Earth as the Chicxulub impact sent a large amount of dust into the air which cooled the Earth’s temperature in addition to making the skies turn dark. And another meteoroid shower that happened approximately 470 million years ago would have also sent large amounts of dust into the air which could have possibly triggered the mid-Ordovician ice age.

An interesting point made by Terada and his colleagues is that the asteroid shower may have happened around the same time as the Eulalia family of asteroids were formed, which, coincidentally, is believed to be the parent body of Bennu and Ryugu. Once samples from both asteroids are brought back to Earth and analyzed, we’ll know for sure.

“My next research plan is to date the collected samples from asteroids Ryugu and Bennu,” Terada said, adding, “If we get the age of 800 million years from the Ryugu sample, I will be so excited.” Now we just have to wait and see if there is a connection.

Man Gets in Trouble for Removing Witch Bottle