In the summer of 1968, a miner called Alex M. was prospecting in the Canadian Northwest Territories along with his partner Veino Heimonen, working for a Vancouver-based mining company. They were out scouting for mineral ore deposits in some pretty remote and rough terrain, and they spent 2 and a half months on this endeavor without finding anything of import. Indeed, it was all a pretty uneventful excursion until the last day of their trip, when they would stumble across a very curious discovery buried out there in the isolated wilderness. Thus would begin a very strange tale of what seems to have been some sort of mysterious interdimensional portal sitting out there in this forbidding wilderness enveloped with inscrutable mysteries and intent.

While peering over the side of a cliff they noticed an odd gouge in the earth below with a flat gully at its bottom measuring 50 feet by 4 feet, which had two large rounded boulders at the top, and seemed to be strewn with some oddly shaped rocks and boulders covered in moss and lichen, as well as featuring a tubular fog bank that just sort of hovered there, unmoving and silent. It was all anomalous enough that they decided to take a closer look and explore this strange sight. On closer inspection they could see that the larger rocks were banana shaped, about 3 feet long, and seemed to be composed of smaller, silvery rocks that were “translucent, similar to looking at frog’s eggs.” They collected several of these smaller rocks, which were reportedly as smooth as glass and about the size of a potato, and neither one of them could identify what sort of mineral it could possibly be. They also found numerous rounded teardrop shaped pieces of smelted rock that looked like glass, as well as slag that seemed to have been produced by artificial mining activity, although none was scheduled to be in that area at the time. 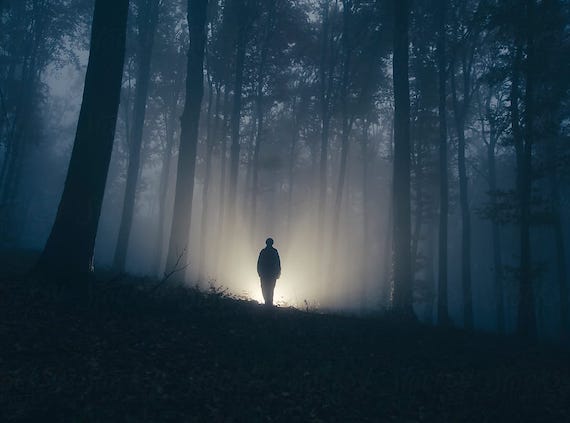 As they puzzled over this weird discovery, that bank of fog hung there in the background, swirling and churning slightly, but still immobile and emanating a rather ominous feeling that made both men nervous. Making it all the more surreal was a very large uprooted tree that was lying on its side next to the mist, with extensive roots jutting out in all directions and which they both deemed to be too large to have come from the rocky gorge they were in. How did it get there? They had not the slightest idea. Alex crept closer to that pulsing bank of fog and trying to peer into it but could not see anything beyond the veil of mist. The only thing he felt fairly certain of was that there were no drops or shafts in the rock along its bottom, and he felt himself drawn towards the throbbing cloud. An irresistible urge to know what was on the other side overcame him, and he felt compelled to take a few wary, experimental steps within past the veil. As soon as he did, a very strange thing would allegedly happen, and he would explain this in a letter to his brother Bill as follows:

Approximately two steps into the mist, I saw a grassy field for as far as my vision was capable of seeing at that time. The grass was about one foot tall at that point. The more I advanced towards the grass, the higher the grass became. there was a wind blowing from the grass away from me. On entering the mist, my vision was limited to my left and right. I advanced until the grass, brown colored, was approximately three feet tall. Then I decided to retreat, which I did. I cannot remember what the sky looked like; grey colored seems correct. I decided to go back into the mist and cautioned myself not to walk into the grass. I went as far as the first [time] and things were the same. As I advanced, the grass got taller, approximately 4foot now, and my vision left and right got wider. Far off to my right there was an oasis? With medium sized trees in a circle with two tall palms? trees growing in the center of the circle. At that point I had enough. At that time my mind went completely blank except for one little piece of my brain that was fighting the takeover of my brain. Next I was on my hands and knees with my brain powers intact and I got out of there in record time. 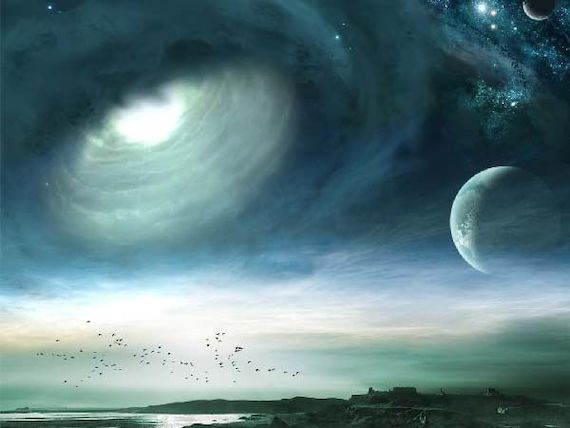 He was very shaken and unsettled at this point, and felt utterly exhausted and drained, unable to even stand up. He crouched there out of breath, wondering what he had just experienced and if it had even been real at all. He would later say that he had felt menaced by the mysterious grass he had seen, set upon by an uneasy dread that told him it would have been dangerous to enter, although he did not know why he felt this way. Then he saw something that made it all even odder still. His brother would claim years later that Alex had told him about this in a phone conversation, and explains what happened in his report to the Center For UFO Studies (CUFON) as follows:

He looked up at the mist and saw two men looking at him, they were standing side by side at the edge of the fog and about 3 feet off the ground. They appeared to be about 6 feet tall plus, had long hair and long beards, salt& pepper colour (more salt colour). They appeared to be about 40 or so years old. They looked Caucasian having facial features like ours but could not see any eyeballs. They looked like identical twins.  They were wearing pale coloured pants and robes that extended down midway between the knee and ankle and a belt around their middle, both were wearing sandals. He looked back down at the ground then back up at the two men in the mist, now one is off to one side in the mist and behind the front man. The man in the front was still standing while the man in the back seem to be sitting on a chair that was not there, it was a lot more difficult to see him in the mist. The man in the back reminded him of the statue called “The Thinker”. Neither of them said anything, they only watched him. Alex said that at this point he was feeling quite shaken, and decided to get back to camp. 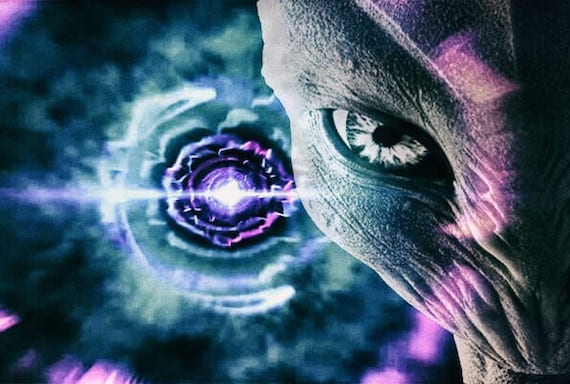 What were these entities? What does any of this mean? Alex would apparently decide not to tell his partner, nor anyone back at their satellite camp, keeping the story to himself for years and long debating with himself over whether to go back and try to find what he called a “doorway.” For decades he never told a soul about any of it, but he did send a description of the bizarre rocks to a geologist called Dr. Sinclair, who purportedly was baffled as to what sort of rocks they could possibly be. Alex finally decided to tell the strange tale to his brother, Bill M, and it was Bill who would finally after years of turning it over in his head decide to report it to the Center For UFO Studies in 2010. There is no mention made of whether anyone ever did try to go back to that site, and Bill remains very vague about the exact location of this place and its “doorway.” CUFON supposedly were able to track down Alex M., who confirmed that it was all true but who seemed disappointed that the story had gotten out and did not want his full name revealed.

What did this man encounter out there among the trees in the middle of nowhere? What was that cloud bank and where did it take him? What was the meaning of that strange gully and its weird rocks? This is one of those odd cases reported many years after the fact, and with little corroborating evidence to back it up, but it sure is bizarre. We are left to wonder whether there are certain portals sitting out there past the fringes of society, and if they really are there who built them and what their purposes are. Whether there is anything to this truly outlandish tale or not we may never know, but it sure does serve to stir the imagination.

Coronavirus May Have Been Present In Bats For 70 Years