A Catalog of Mysterious and Amazing Lights

Texas’ huge Big Thicket certainly lives up to its name: an 83,000-acre area, it is a sprawling mass of rivers, swampland, and incredibly dense woods where, according to legend: "You'll find every critter in there from crickets to elephants." Well, that’s not quite true, but it is home to something far stranger: the Ghost Lights; football-sized glowing orbs that float among the trees and zip along the tree-shrouded lanes late at night. Although sightings of the strange Ghost Lights have persisted since at least the 1940s, explanations for their presence are both varied and descriptive. Some people believe them to be merely the reflections of car headlamps; while, for the most part, the scientific community considers them to be something akin to swamp-gas. UFO proponents, however, note that legends tell of a UFO crash deep in the Big Thicket in 1964 - and which, some believe, may be indicative of an on-going alien presence in the area. Whatever the truth, late at night when the whole area is blanketed in darkness, the Big Thicket’s famous ‘Ghost Light Road’ affords the UFO-spotter a great chance to see the famous lights for his or herself.

Somewhat similar in nature to the infamous Ghost Lights of the Big Thicket, the so-called Marfa Lights can be seen in the vicinity of the Texas town after which they are named. Reports describe brightly-lit, basketball-sizes spheres that float either just above the ground or sometimes high in the air. Colors are generally described as being yellow, orange, white or red – with green and blue lights occasionally reported, too. Sometimes traveling at high speeds, and at other times at a very slow pace, the Marfa Lights often appear in groups, to divide into pairs, and even merge together – disappearing and re-appearing in the blink of an eye. Eye-witness testimony suggests the Marfa Lights can persist from a mere second to possibly even several hours; and although predominantly a nocturnal phenomenon, are sometimes spied during sunset and sunrise, when the landscape is dimly illuminated. And for those who may want to check out the lights for themselves, the most profitable place to head for is south of U.S. Route 90 and U.S. Route 67, five-to-fifteen miles east of Marfa itself. Good hunting!

Like the Marfa Lights and the Ghost Lights of the Big Thicket, the Brown Mountain Lights of North Carolina are unidentified aerial phenomena that have regularly haunted the area for decades. For example, one of the earliest accounts on record dates from September 13, 1913, and was reported in the Charlotte Daily Observer newspaper. According to the story: a fisherman claimed to have seen ‘mysterious lights just above the horizon every night’, red in colour, and with a pronounced circular shape. Soon after this account surfaced, however, a United States Geological Survey employee, D.B. Stewart, studied the area in question and concluded the witnesses were simply mistaking train-lights for something stranger.

A more formal U.S. Geological Survey study was begun in 1922 and concluded, again, that witnesses were misidentifying train-lights, as well as lights from cars and camp-fires. However, according to a marker that can still be seen on the Blue Ridge Parkway to this day, a huge flood struck the area soon after the completion of the study. All electrical power was lost and trains were inoperable for a significant period of time. The Brown Mountain lights, however, continued to be seen. Paranormal expert and author Joshua P. Warren has extensively investigated the lights – and, in 2000, succeeded in capturing several on film – and is convinced that even though a definitive answer still eludes us, they are not merely the result of mistaken identity. For those keen to check out the area for themselves, one of the best vantage points is Wiseman’s View, which is situated approximately 4 miles from Linville Falls, North Carolina; while the best time of year to see the Brown Mountain Lights is reportedly from September to early November.

Official investigations within the U.K. of unusual aerial phenomena started during the First World War. One of the most notable reports can be found within the archives of the British Admiralty and dates from, rather incredibly, 1915. Prepared by a Lieutenant Colonel W.P. Drury, the Garrison Intelligence Officer at Plymouth Garrison, Devon, England, a four-page document tells the story. It concerns a series of strange events that occurred on the wilds of Dartmoor (the setting for Sir Arthur Conan Doyle’s classic novel, The Hound of the Baskervilles). Lt. Col. Drury advised his superiors at the Admiralty that on 28 June 1915 he and a colleague, one Lt. C. Brownlow of Naval Intelligence, had interviewed a Miss Cecilia Peel Yates at Dolbeare Cottage, Ashburton, about an unusual experience: "She informed us that a few mornings previously, just before dawn, having been awakened by the barking of dogs, she saw from her bedroom window a bright light in the sky, bearing N., and apparently suspended a short distance above the earth. It was too large and bright for a planet, and, as she watched, it swung to the N.E., and disappeared. Haytor is due North of Ashburton and 4 miles distant as the crow files."

Lt. Col. Drury and Lt. Brownlow were more than skeptical of Miss Peel Yates’s UFO-like encounter: "Although we had entirely failed to shake the lady’s evidence by cross-examination, we deemed her story so wildly improbable that we excluded it from our official report. But shortly afterwards reports of a similar phenomenon were received from the neighbourhood of Hexworthy Mine, which is 5 miles to the N.W., across Dartmoor. On July 12th, Lieutenant Brownlow and I proceeded to Sherril, near Hexworthy, and interviewed Mrs. Cave-Penny and her daughter, from whom the report emanated. Their house, an isolated form on the moor, commands a clear view of the mine, which is two-and-a-half miles distant. They stated that on several occasions they had watched a bright white light rise from a point a few hundred yards to the Eastward of the mine, swing across the valley to about the same from Totnes, and a paddock some distance West of it, and disappear." 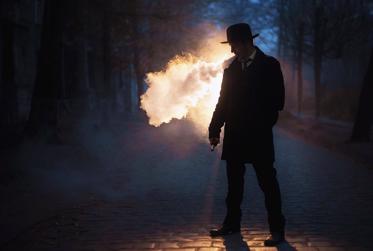