Some of the most exciting UFO encounters are those that have been witnessed by multiple witnesses at the same time. If you add in a selection of witnesses who are traditionally considered reliable, and then throw in photographic evidence to boot, well, then you have gold. There are only a few good instances of all of these elements coming together in just the right way, but when they do, it all serves to propel a good amount of debate, analysis, and discussion. One such strange incident supposedly happened out at a remote island in the Atlantic Ocean, and which produced photographs and testimony that have been picked apart to this day.

On January 16, 1958, the Brazilian ship Almirante Saldanha was off the coast of the remote and rugged island of Trindade, around 680 miles from the east coast of Brazil. The island is a sparsely inhabited, 3.9 square-mile rough slash of volcanic rock lying in the middle of nowhere, its only inhabitants an oceanographic post and a meteorological station run by the Hydrography and Navigation Division of the Ministry of the Brazilian Navy, and the Almirante Saldanha had been brought here for Naval oceanographic research as part of the International Geophysical Year project. Aboard the vessel were Captain José Teobaldo Viegas, various scientists, explorers and a civilian photographer by the name of Almiro Baraúna, brought aboard to take underwater pictures for the expedition, as well as some other civilian reporters and assistants.

On this day the ship, which had been anchored at Trinidade for several days, was preparing to depart headed back towards Rio de Janeiro when at around midday a number of those gathered on the deck observed something very strange in the sky approaching the island from the east, and flying towards the "Pico Desejado" (Wished Peak). The object was described as gray, metallic and glinting or shining, and roughly spherical in shape, with what seemed to be a ring around it, similar to the planet Saturn, as well as a greenish, phosphorescent vapor wreathing it. It was so unusual and moving at such high speed that it was obvious to those who saw it, including the photographer Baraúna and Captain Viegas himself, that this was no normal aircraft. Baraúna would later say of the sighting:

The deck was full of sailors and officers. Suddenly, Mr. Amilar Vieira and Captain Viegas called me, pointing to a certain spot in the sky and yelling about a bright object which was approaching the island. At this same moment, when I was still trying to see what it was, Lieutenant Homero, the ship's dentist, came from the bow toward us, running, pointing out to the sky and also yelling about an object he was sighting. He was so disturbed and excited that he almost fell down after colliding with a cable. Then I was finally able to locate the object, by the flash (of light) it emitted. It was already close to the island. It glittered at certain moments, perhaps changing its own light - I don't know. It was coming over the sea, moving toward the point called the Galo Crest.

The object apparently approached the peak to eerily hover over it for a few moments before disappearing behind it momentarily, and then reappearing, after which it continued its inscrutable journey out over the forlorn sea. This all happened as the crew stared in awed fascination, but Baraúna was a professional photographer and had the presence of mind to snap a series of four pictures of the mysterious object. He would explain of this:

I had my Rolleiflex 2.8, Model E, which was kept inside an aluminum box for protection against the corrosive effects of water and salt. I had left my Leica with a telephoto lens in my cabin a few moments before. I had lost thirty seconds looking for the object, but the camera was already in my hands, ready, when I sighted it clearly silhouetted against the clouds. I shot two photos before it disappeared behind the peak Desejado. My camera was set at a speed of 125 [125th of a second], with the aperture at f/8, and this was the cause of an overexposure error, as I discovered later.

The object remained out of sight for a few seconds - behind the peak - reappearing bigger in size and flying in the opposite direction, but lower and closer than before, and moving at a higher speed. I shot the third photo. The fourth and fifth ones were lost, not only because of the speed the saucer was moving, but also for another reason: In the confusion produced as a result of the sighting, I was being pulled and pushed by other persons also trying to spot the object and, as a consequence, photographed the sea and the island only - not the object. It was moving out to sea again, in the direction from which it had come, and it appeared to stop in midair for a brief time. At that moment I shot my last photo (the last on the film). After about ten seconds, the object continued to increase its distance from the ship, gradually diminishing in size and finally disappearing into the horizon. 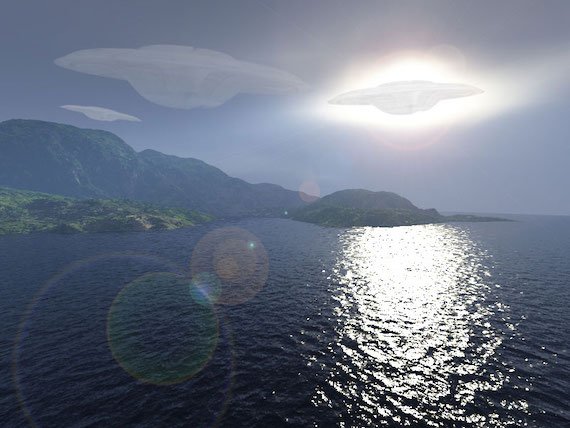 When the otherworldly object was gone, the ship's commander ordered the negatives to be developed right away and they were amazed by what they saw. Several of the crew aboard the ship would report that the vessel had experienced technical malfunctions during and after the encounter, as if the craft was exerting some influence on their electrical systems either accidentally or intentionally. Baraúna would say of this:

According to the rumors I heard at the deck, the electronic equipment of the ship stopped working during the apparition of the object; what I can confirm is that after the ship left the island, the equipment malfunctioned three more times and the officials didn't have any plausible explanation for what was happening. Every time the ship stopped, the lights weakened slowly until the point they completely went out. When this happened, the officials would walk to the deck with their binoculars, however, the sky was clouded and they couldn't see anything.

Once the ship was back in Rio, Baraúna was then allegedly approached and interviewed by various Naval officials about the mystery object he had photographed. The military wanted to know numerous details about the sighting and were very interested in analyzing the photographs, which apparently impressed them very much and were deemed to be genuine after exhaustive testing by the Laboratório de Reconhecimento Aéreo da Marinha, which is the Brazilian Navy's Aerial Reconnaissance Laboratory. Baraúna said of his time with these officials and the analysis of the images:

I was interviewed by several high-staff officers, who asked me all kinds of questions. I went there twice. At the first meeting, they requested the negatives for examination. They were sent to a civilian organization, the Cruzeiro do Sul Aerophoto grammetric Service, remaining there for four days. I was told by the Navy officers that the analyses proved they were genuine -excluding definitely the possibility of a trick or falsification. On the second visit, they performed several time-tests. While I worked with my Rolleiflex, taking shots at the same time intervals I had used to photograph the object, three Navy officers with chronometers registered the times. They came to the conclusion - based on these tests as well as on studies concerning the ship's position and examinations of charts of the island - that the object was flying at a speed between 900 and 1,000 km./hour [about 600 mph]. The object's size was also estimated on the basis of studies related with the island's details also appearing on the photos, diagrams drawn on charts, graphs, et cetera. The object was about 120 feet in diameter and about 24 feet high.

It was not long before the photos got out into the wild, and they were featured heavily in Brazilian news publications and in the media at large. They generated a huge amount of discussion and debate, and through it all the Brazilian Navy stayed quiet, neither confirming or denying the alleged incident. The negatives were still floating around though, and before long the story was leaking out of official mouths, and with all of the rabid media attention it was getting, the Navy Ministry was forced to say something on the matter, giving a typical government opaque and ambiguous statement that reads:

With reference to the reports appearing in the press that the Navy is opposed to divulge the facts concerning the appearance of a strange object over Trindade Island, this Cabinet declares that such information has no basis. This Ministry has no motive to impede the release of photographs of the referred-to object, taken by Mr. Almiro Barauna, who was at Trindade Island at the invitation of the Navy, and in the presence of a large number of the crew of Almirante Saldanha from whose deck the photographs were taken. Clearly, this Ministry will not be able to make any pronouncement concerning the object seen, because the photographs do not constitute sufficient proof for such purpose.

In Brazil, the photos have widely been accepted as very good photographic evidence of UFOs, but there has of course been skepticism to wash all of it down. The U.S. Air Force’s UFO task force Project Blue Book labelled it curtly as a hoax, and Baraúna has had much damning criticism levelled against him. It has been pointed out that the photographer was a known hoaxer and fraud, apparently having a long history of faking pictures of things such as bogus treasures on the ocean floor, and he often used trick photography in humorous articles, including even one devoted precisely on how to fake UFO photos. It has been suggested that what is shown in the photos is trickery at best, and merely a misidentified aircraft seen through fog at best. Yet, we are still left with the estimated 50 witnesses aboard the vessel who apparently saw the phenomenon.

In the end, the Bralilian government has not had much else to say on the matter, and it is technically unsolved. The photos still do the rounds, and there are myriad explanations and in-depth breakdowns and analyses to be found. Yet, they still manage to remain elusive teases that can't really be proven or disproven. Indeed, the whole Trinidade Island incident is mired in a muck of uncertainty, government opaqueness, and a lack of straight answers. While it has so many promising elements of something exciting, it is unfortunate that it is likely to remain a specter that will never truly be solved or find a consensus, and will go on as just another one of the many UFO accounts that will probably remain swirling about without landing on one thing or another.