The history of the town called Two Guns, Arizona has a history inextricably linked to blood and death. In the mid-19th century, settlers began to trickle into the region, and the area that would eventually become Two Guns was an important part of the route west, seen as the perfect place for wagons to cross the imposing Canyon Diablo. It would become a major junction of the Santa Fe Railway, on which a trestle was built to cross the canyon, and the became a temporary settlement for railroad workers, quickly gaining a reputation as a lawless place of drifters, gamblers, and train robbers. At the time Two Guns did not yet exist, and the area was populated by often aggressive Natives, with the Apaches and the Navajos at each other’s’ throats as well, and it is this animosity that would escalate to birth the town of Two Guns with violence, and also spawn a cursed and haunted dark realm called the Death Cave.

At the time the Apaches and Navajo were bitter enemies and rivals, constantly launching raids against each other, and in 1878 Apache raiders launched a massive massacre against two big Navajo camps along the Little Colorado River. The Apaches were utterly ruthless, plundering the camps and killing every single man, woman, and child except for three girls who they kidnapped to take prisoner. All that remained of the once thriving camps were burned out husks, charred debris, and dead bodies left out in the whistling wind to rot, and when the Navajo chiefs got word of the slaughter they were thrown into a fury. They did their best to track down the perpetrators, but the marauding Apache raiders were extremely elusive, and could not be located, often seeming to just vanish into thin air, even as they attacked still more camps and killed more people. It was only by complete accident that the secret to their evasion became clear, and the carnage would truly begin.

A group of Navajo scouts was sent to the Canyon Diablo area after getting word that the Apaches were active there, and although at first they could find no sign of the enemy, it would come to pass that as they took a rest a warm blast of air was felt billowing from the ground below their feet.  The startled scouts investigated the area to find that there was a partially blocked cave beneath them, the entrance located down a nearby ravine, and not only that but the Apaches had apparently set up a camp in a cavern within the bowels of the cave, large enough to hold all of them and even their horses. The warm air had been from their campfire, and a complete raiding party was down there in the darkness hiding out, no doubt plotting their next audacious massacre and vanishing act. Being significantly outnumbered, the Navajo took no action at the time, instead stealthily making their way back to their village to tell the others of what they had found.

A Navajo attack party was quickly assembled and headed out towards the cave, where they found the oblivious Apaches still hiding out. After sneaking up on the cave, the Navajo silently dispatched two Apache guards and then went about gathering brush and kindling to build a bonfire at the entrance to the cave, which belched forth smoke into the interior. The Apaches had no other exit, and with the choking smoke enveloping them some tried to escape, only to be killed by the waiting Navajo. The Apaches did their best to block the entrance of the cave to stop the smoke, even killing their own horses to act as barricades, but it was a losing battle. The Apaches sent one of their numbers to go negotiate with the Navajo, who agreed to stop the onslaught and spare them if only the three girls who had been kidnapped were returned safely. It would soon become apparent that the girls had in fact later been executed, and the Navajo did not take this news well at all. 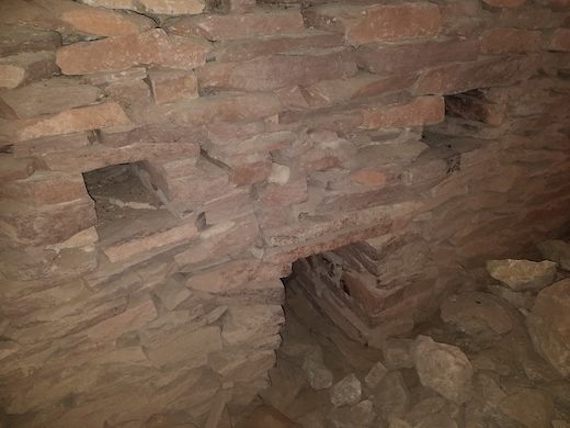 The Navajos went about fanning the fire they had made until the entire entrance was an uncontrollable inferno that no one dare approach. The Navajo party then waited, ignoring the death screams from within, until every single one of the Apaches inside was dead and the cave was filled with singing hot air, charred corpses, and toxic smoke so thick and heavy that it shot out from crevices in the earth above. The Navajo then waited for the cave to cool off and looted the dead bodies of the 42 Apache warriors found within, and then proclaimed the cave to be a cursed and haunted place that no one was to ever approach again. Indeed, it was often reported by passing settlers and Natives alike that ghosts could be seen wandering the area, as well as inexplicable lights and moaning or screaming could occasionally be heard emanating from the darkness within the cave.

When settlers began coming to the region in earnest, both the Navajo and Apache warned them of the cursed cave, but this mostly fell on deaf ears. In fact, a settler by the name of Ed Randolph would build a store right next to the cursed cave, and later in 1922 the land would be purchased by an Earle and Louise Cundiff, who then built a store, restaurant, and gasoline pumps at the location. This would be the beginning of Two Guns, which received a shot in the arm when an eccentric man by the name of Harry E. Miller began leasing land there and developing it heavily, adding a new motel, post office, restaurant, gift shop, tavern, and service station, as well as a zoo populated by local animals such as mountain lions, cougars, bobcats, porcupines, gila monsters, scorpions, coral snakes, birds and even a lynx. The budding settlement, which he called Two Guns, would attract some permanent residents and manage to eke out an existence in these badlands. 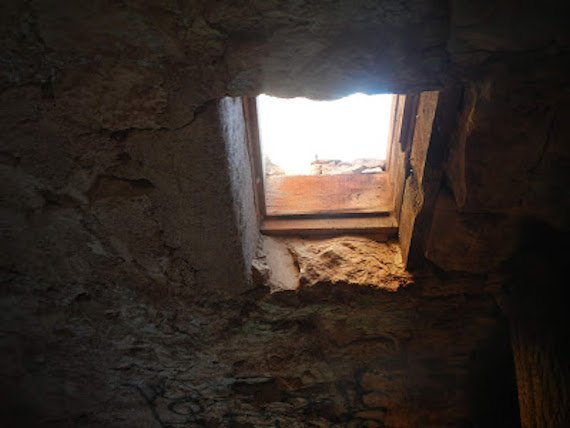 Miller was very aware of that death cave and its morbid history, and decided to capitalize on it to turn it into sort of a macabre tourist attraction. He had the cave cleaned out, and installed electric lights, fake ruins, bright, gaudy signs, and a tacky stone entrance to what he called “The Mystery Cave.” There was even a drink bar right outside the entrance for refreshments and a gift shop to boot. Proving himself to be a true class act, Miller even sold bones and skulls he had found within the cave as souvenirs, and it is perhaps no surprise that he was the target of the cave’s supposed sinister curse. His settlement was constantly plagued by fires, an altercation led to Miller murdering Earle Cundiff, for which he was oddly acquitted, and Miller was mauled on two occasions by his zoo animals. Legal problems plagued him for years, until in 1930 he left Two Guns for good, utterly defeated by this miserable place.

Louise Cundiff would stay and try to salvage the dying town, remarrying and trying to keep it all afloat, but she would eventually sell the whole thing in 1950, after which it mostly became a decrepit, feral ghost town. In 1960 the town was purchased by a Ben Dreher, who cleaned up and developed the area and added structures, as well as restoring some of the ruins of the older buildings as a historical tourist attraction. The town clawed its way up from the ashes, even getting its own offramp when the I-40 highway was built, but the curse of what was now known mostly as “The Apache Death Cave” was not done with this place just yet. In 1971 a huge fire destroyed most of Two Guns, and when businessman Howard Armstrong acquired the land in 1992 he soon dropped dead of a stroke after failing to reinvigorate the desolate town. The last known owner of the site was Jimmy Solinger, who would have no more luck with the place and eventually committed suicide in 2000.

Today Two Guns is just crumbling ruins, with not much going on and most of the visitors macabre curiosity seekers or paranormal investigators. Is any of this dark history due to the curse of the Apache Death Cave? Or is this just a spooky story draped upon one of the many failed ghost towns throughout the southwest? Whatever the case may be, it remains a violent and tragic historical oddity that stirs the imagination.