Modern Reason Why the Maya Abandoned Ancient City of Tikal

There are many reasons why major cities today might collapse and be abandoned by their citizenry – war, natural disaster, changing demographics, climate change, etc. In most cases, the cause is evident or easy to ascertain. That hasn’t been the case with the great cities of the Classic Maya civilization. It reigned over what is now Central America for centuries – from about 250 to 900 CE – when the massive urban centers of Palenque, Copán, Tikal and Calakmul collapsed and were mysteriously abandoned, with some Mayas moving to the Northern Yucatán where a few empires grew (Chichén Itzá for example) but then collapsed again, this time for a very explainable reason – the invasion of Europeans. Recently, archeologists studying the ruins of Tikal in what is now Guatemala finally figured out the reason why it was abandoned … and it’s a very modern tragedy.

“The ancient Maya abandoned the major center of Tikal in the mid-ninth century CE and although scholars have studied this site intensively for the past 60 years, exactly how and why the city met its ill-fated ending have remained unanswered questions. Our investigations, combining novel aDNA and soil geochemistry assays, however, shed significant new light on the abandonment of this once-powerful political, ceremonial and commercial hub.”

In a new study published in Scientific Reports and summarized in a press release by the University of Cincinnati, anthropologists, geographers, botanists, biologists and chemists from the school describe how they went underground into 10 reservoirs which had been used to collect and store rainwater in this area that was far from lakes and rivers and prone to droughts. The waters were used for drinking, households, farming and by the leaders for ceremonial pools used to show their alleged mastery over the rains and the waters. Unfortunately, the masters weren’t in control of something else – the habits of their own people.

“We found two types of blue-green algae that produce toxic chemicals. The bad thing about these is they’re resistant to boiling. It made water in these reservoirs toxic to drink.”

David Lentz, a UC professor of biological sciences and lead author of the study, tells what the researchers found when analyzing the sediments from the reservoirs. Even if the Tikal residents held their noses and tried to force down the algae-filled water, there was something else in it that would have killed them ... mercury. How did this toxic metal end up in the water? The researchers ruled out the surrounding bedrock and volcanic ash. But when they came back out of the reservoirs and looked around, they found the answer.

Kenneth Tankersley, an associate professor of anthropology in UC’s College of Arts and Sciences and study co-author, knew exactly what gave those murals their red color variations – cinnabar. Cinnabar is a bright-red toxic mercury sulfide mineral used as a pigment around the world – including in ancient Central America.

“That means the mercury has to be anthropogenic.”

There’s your word and warning for the day. ‘Anthropogenic’ means “originating in human activity.” The Maya and their leaders liked seeing everything decorated, so they slapped coats of cinnabar-laden coloring on every bare surface. That might not have been a problem if Tikal was on a river and the runoff headed downstream to the next unsuspecting village, but every rain washed a little bit off of every wall into every reservoir that eventually ended up in every glass and bowl and belly. It was mercury poisoning together with the foulest-tasting water around that caused the demise and abandonment of Tikal. 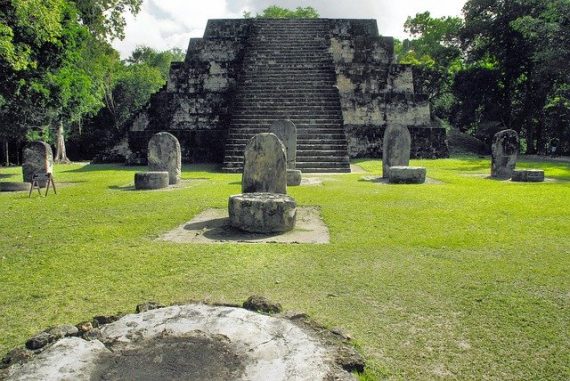 "There may well have been those who saw the events described above and the concomitant droughts as a failure of their leaders to adequately appease the Maya gods. Indeed, these events coming together must have resulted in a demoralized populace who, in the face of dwindling water and food supplies, became more willing to abandon their homes."

While that explains the demise of Tikal, it may not be the reason for the abandonment of other cities, but it must have contributed in some part.

Residents of Flint, Michigan, are welcome to send a copy of this story to THEIR Leaders.