“Axisymmetric disks of high-eccentricity, low-mass bodies on near-Keplerian orbits are unstable to an out-of-plane buckling. This "inclination instability" exponentially grows the orbital inclinations, raises perihelion distances, and clusters in the argument of perihelion.”

Wait … what? Let’s decode that to something most of us can understand.

“The outermost reaches of our solar system are a strange place—filled with dark and icy bodies with nicknames like Sedna, Biden and The Goblin, each of which span several hundred miles across.

The orbits of these planetary oddities, which scientists call “detached objects,” tilt and buckle out of the plane of the solar system, among other unusual behaviors.”

Is that better? You’re welcome. Researchers at the University of Colorado Boulder have been studying the mysterious area of our solar system beyond Neptune and the Kuiper Belt where small icy objects and possibly one big Planet Nine reside in orbits completely out of whack from the rest of the solar system. Ann-Marie Madigan, an assistant professor in the Department of Astrophysical and Planetary Sciences and graduate student Alexander Zderic decided to test whether a Planet Nine is needed to gravitationally influence the tiny icy bodies scattered about the area or if they obtained their crazy non-solar-planar orbits (see-saws and clusters, for instance) on their own. In the process, they came up with a new concept in planetary movement described in a press release and papers in two different journals. Who cares … did they find Planet Nine?

“In this Letter, we present N-body simulations of the long-term behavior of such a system, finding apsidal clustering of the orbits in the disk plane. The timescale over which the clustering is maintained increases with number of particles, suggesting that lopsided configurations are stable at large N. This discovery may explain the observed apsidal (ϖ) clustering of extreme trans-Neptunian Objects in the outer solar system.”

“In the process, they discovered something unusual: the icy objects in their simulations started off orbiting the sun like normal. But then, over time, they began to pull and push on each other. As a result, their orbits grew wonkier until they started to resemble the real thing.”

Yes, the findings are based on simulations – albeit using supercomputers and the largest collection of input data ever. What they found is that the tiny icy planets started off in the same orbital plane as their larger siblings closer to the Sun, but then began to influence each other – pushing and pulling themselves into strange orbits. However, a simulated Planet Nine was never able to accomplish this. Instead, the models showed that there are a lot more tiny planetoids out there than we suspected (a long-held assumption based on the fact that we can’t see them with current telescopes) and those large numbers allow them to join forces and exert what Madigan and Zderic dubbed “collective gravity.”

“You needed objects that added up to something on the order of 20 Earth masses. That’s theoretically possible, but it’s definitely going to be bumping up against people’s beliefs.” 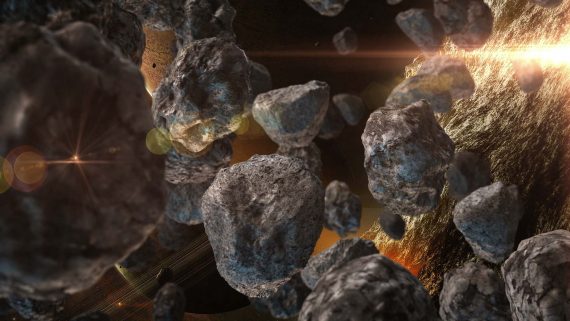 Not to mention bumping into each other. “Theoretically possible” means there’s still hope for a Planet Nine, which is also theoretically possible and never seen with current telescopes. While the idea of Planet Nine being thousands of little Planet Nines has been proposed before, Madigan and Zderic have added the theory of collective gravity to the equation. They're hoping the Vera C. Rubin Observatory, scheduled to be operational in Chile in 2022, will finally be able to see some of these “detached objects” and confirm their theory.

Meanwhile, trying to understand these scientific papers sometimes makes my brain feel like a detached object.

When Wild Humans Once Roamed the U.K.