Certainly one of the most recognized and famed inventors in history is none other than Nikola Tesla. Famous for his various groundbreaking inventions pertaining to electricity and energy, he is known for his vast contributions to enabling electricity to transmit over long distances, as well as a plethora of other pioneering inventions that changed the world as we know it. Considering his eccentric demeanor, has has also gathered around him legends that make him almost larger than life, including building a functional death ray, causing the infamous Tunguska explosion in Siberia, and also the time he apparently crafted a working earthquake machine.

In the 1890s, Tesla was hard at work on an invention he called an “oscillator,” which was a reciprocal electricity generator meant to aid energy transfer and be a replacement for inefficient steam engines being used to power generators. The general idea was that his machine would use a system of valves to oscillate a physical object back and forth to create various frequencies, and that a receiving device would transform these mechanical oscillations back into an electric current. There were many versions of his ambitious device. In one steam would be forced into the oscillator, which would be expended outward to power a series of pistons which would vibrate at extreme high speeds and intensity to produce energy, with other versions of this design using air-compressors or bottled gas. Another was meant to utilize electromagnets to adjust the frequency of the oscillation, and yet another was meant to send energy into the rocks within the ground, which would vibrate and then transfer that energy to a second device to transform the oscillations into electricity, in a process he called “telegeodynamics.”

In all versions the device was in essence a piston frictionlessly vibrating in a cylinder, and Tesla predicted it was the wave of the future and would make him a fortune, but it was a process that had its share of growing pains. In one failed test, Tesla attached a vibrator to a cast-iron chain link, which then blurred and chattered into pieces before startled witnesses’ eyes, one of the pieces violently projected into a building across the street and luckily not injuring anyone. It also was often reported that the intense vibrations had a physiological effect on people nearby, which typically took the form of headaches, nausea, and uncontrollable bowel movements that sent them running for the nearest toilet.  Yet another rather frightening test allegedly ended up in causing an earthquake that could have very well destroyed an entire building.

The device in this case was claimed by Telsa to be a portable version that could fit in a pocket and was powered by compressed air. In one experiment he had hooked the machine up to a steel beam in his own apartment building and had caused shaking and convulsing similar to an earthquake, which caused him to promptly shut it down. In another experiment in 1898, he allegedly hooked up his oscillator at his laboratory at 48 E. Houston St., New York. He would say that one evening he had hooked up the machine to the support beams of his apartment building, and when he started it up objects began sliding off of shelves and increasingly flying through the air. This would all quickly escalate, until there was a real earthquake event that would bring police and emergency services, and Tesla would write of his little covert experiment’

I was experimenting with vibrations. I had one of my machines going and I wanted to see if I could get it in tune with the vibration of the building. I put it up notch after notch. There was a peculiar cracking sound. I asked my assistants where did the sound come from. They did not know. I put the machine up a few more notches. There was a louder cracking sound. I knew I was approaching the vibration of the steel building. I pushed the machine a little higher. Suddenly all the heavy machinery in the place was flying around. I grabbed a hammer and broke the machine. The building would have been about our ears in another few minutes. Outside in the street there was pandemonium. The police and ambulances arrived. I told my assistants to say nothing. We told the police it must have been an earthquake. That’s all they ever knew about it. Vibration will do anything. It would only be necessary to step up the vibrations of the machine to fit the natural vibration of the building and the building would come crashing down. That’s why soldiers break step crossing a bridge. 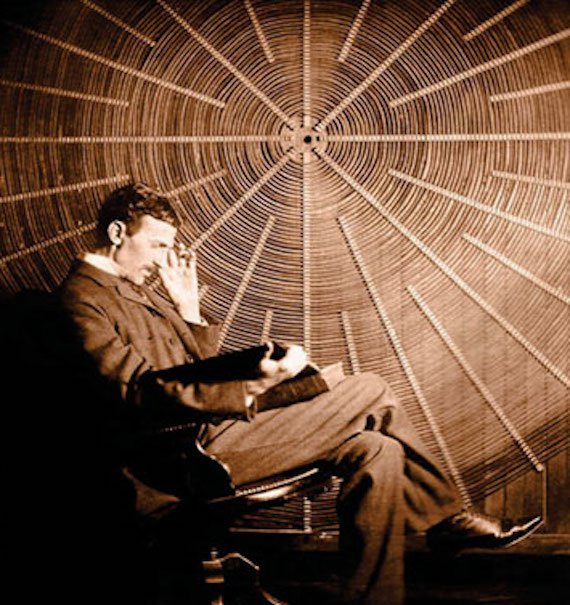 He would later claim that the oscillations of his device could potentially reach enough magnitude to shake the Empire State Building to the ground, and pretty soon his invention was being called “The Earthquake Machine.” It is unclear if this was all an exaggeration or really happened, but if it is true then it would be a real example of an earthquake weapon. Whether any of it was true or not, it would lay the foundations for other experiments with vibratory devices such as Georg Constantinesco’s vibratory drills and rock-cutters and others. We are left to wonder whether Tesla's supposed earthquake machine ever existed, or it it is just another unconfirmed detail of his very strange life. If it is ever was real, it has passed into the mists of time, and we may never know for sure.

The Strange Saga of a Séance and a “Classic Neanderthal”