Paranormal Entities on the Highways: Specters of the Roads

Neil Arnold is a good friend of mine, and someone who - also like me - has spent a lot of time investigating the matter of supernatural "Women in Black" that can be found all around the world. And "Women in White" too. Neil has put together a wealth of material on this strange and creepy phenomenon. And, today, I'm going to share with you data that Neil has shared with me. With that all said, now I'll hand it over to Neil: "For almost a century an abundance of motorists while driving through the village of Blue Bell Hill in Kent [England] have claimed to have knocked down, picked up or seen by the roadside a young, forlorn female specter dressed in a pale dress. Over the years the legend has become known as the 'phantom hitchhiker of Blue Bell Hill' and yet what happened during the January of 1993 on that ancient, chalk hill was far more sinister.

Neil continues: "On January 6th at 12:45 a.m. five people – the Maiden family – were traveling  in a vehicle up what is known as the Old Chatham Road – the original route through Blue Bell Hill before the construction in the 1970s of the dual carriageway (the A229) – when they observed a figure standing in the road at the edge of the headlight beam. The driver, a Mr. Malcolm Maiden, was accompanied by his wife, Angela, who was the passenger, and in the backseat sat their young daughter who was fast asleep, plus Mrs. Maiden’s mother and a friend of the family. The figure started across the dark lane; moving from right to left causing Mr. Maiden to slow the vehicle. At first, the four witnesses thought that they were being hoaxed by someone in a costume as possibly a very belated Halloween prank. The figure according to Mr. Maiden was 'wearing a long old fashioned dress, a tartan shawl round the top and a bonnet with a brim.'"

Neil has more to say: "However, from here things became extremely unnerving. The headlights of the car illuminated a despicable form that appeared to be hunched over 'like when you trap a rabbit in your headlights' but within a split second the apparition had rounded on the vehicle and it was then that the witnesses saw the face. 'It was totally horrific,' Mrs. Maiden reported, '[the face was] very small…black beady eyes. It was like a wizened face.' And yet this was not the most terrifying characteristic of the hag. The worst thing of all was the mouth. It opened like an empty black hole. My mother was sitting directly behind me. At the same time I remember we said 'Oh, my God!'"

"Suddenly an eerie hissing noise filled the interior of the vehicle even though the windows were closed on this cold, clear night. The figure appeared to be clutching a spray of twigs which in a bony hand it shook aggressively. In panic Mrs. Maiden raised her arm as if to protect herself as the central locking of the car was engaged and finally – breaking from the spell of the hideous entity – Mr. Maiden put the car into correct gear and pulled away from the apparition leaving it to its own devilish devices. Mrs.' Maiden’s mother kept her eyes on the figure which seemed to then vanish into the shadows of the treeline and with that Angela’s daughter stirred from her slumber; stating that a horrible atmosphere had descended over the vehicle.  The terrified family told the local newspaper of their ordeal with Mrs. Maiden adding: 'I’ve never felt evil before and I’ve never been so terrified. I felt as if I had looked into the eyes of the Devil.'" 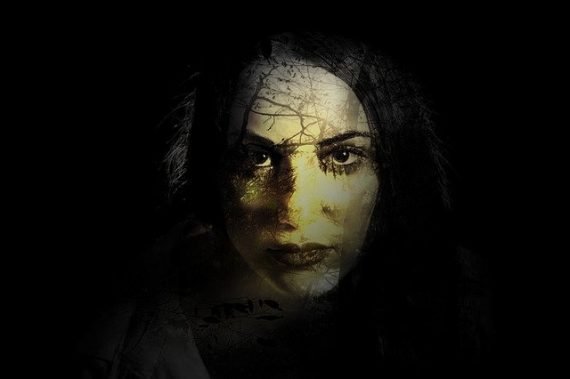 Neil is not finished:"It could be argued from a skeptical viewpoint that such encounters are rare and most likely involve victims of a clever, albeit disturbing hoax but that is clearly not the case. In 2003 a young couple were traveling up the Chatham Road on a dark night when the male driver decided to stop and urinate in the bushes. When he returned to the vehicle he and his girlfriend screamed in terror as a ‘witch-like’ figure zipped across the dark lane ahead of them. This echoed the case of a lorry driver who in the 1970s was driving up the Chatham Road toward the dual carriageway. It was during the early hours on a crisp November when he noticed a hooded figure in black cross the road in the vicinity of the steps which lead down into the woods toward another ancient stone structure named Kits Coty House. On a raining evening just a few years ago a young lady named Miss Hayes was driving home from work heading towards the Lower Bell public house at the bottom of Blue Bell Hill when she noticed through the downpour an old woman in black standing by the roadside. As she approached the motorist observed that the figure was wearing a long black kind of trench-coat but upon looking again the figure had vanished."