People of a certain age will remember when phones were called ‘telephones’ and they actually emitted a ring, not a ring tone that is often all tone (or tune) and no ring. Are we heading to a point when the audio ‘ring’ no longer exists? According to new researcher, Earth itself won’t let that happen. Researchers have finally confirmed a centuries-old theory that the planet is ringing like a bell and the cause is strange waves that resonate in the atmosphere. Did you hear that?

"Randomly excited global-scale resonant modes" sound like a modern problem to avoid but it’s actually a theory developed in 1799 by renowned mathematician and scientist Pierre-Simon Laplace – often referred to as the Newton of France. Despite living in the early 19th century, Laplace was a modern thinker with many developments named for him that are still in use today -- Laplace's equation, the Laplace transform and the Laplacian differential operator. He also developed the nebular hypothesis of the origin of the Solar System (the solar system was formed from a nebular disk which explains the planar orbits of the planets) and was one of the first to postulate the existence of black holes. And he predicted that resonant wave frequencies should be present and ringing in the atmosphere. (Newton is lucky he lived first or he’d be the Laplace of England.)

In a University of Hawaii press release announcing the publication of his study in the Journal of the Atmospheric Sciences, Takatoshi Sakazaki, an assistant professor at the Kyoto University Graduate School of Science, describes how he and Kevin Hamilton, an emeritus professor in UH Mānoa’s Department of Atmospheric Sciences revels that this discovery was the result of analyzing atmospheric pressure over the globe collected every hour for the past 38 years—the first study of this kind to use global rather than local data. (What was the atmospheric pressure on your birthday in 1982? They know.) This ERA5 dataset was provided by the European Centre for Medium-Range Weather Forecasts (ECMWF), which is now available for public use.

If Pierre-Simon Laplace were alive today, he’d be high-fiving Sakazaki and Hamilton (wearing gloves, of course) because they found dozens of waves in randomly excited global-scale resonant modes. To pin down the source of the ringing, they looked for fast-moving (over 700 miles per hour) with frequencies between 2 hours and 33 hours traveling horizontally in an alternating pattern with slow-moving waves. And?

“For these rapidly moving wave modes, our observed frequencies and global patterns match those theoretically predicted very well. It is exciting to see the vision of Laplace and other pioneering physicists so completely validated after two centuries.” 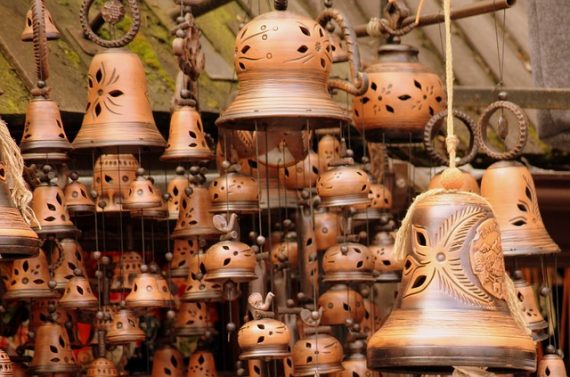 Sakazaki didn’t need a bell to ring to celebrate the discovery – he had found a whole planet of them. Of course, one study leads to another and the pair is looking for funding to research how these waves form and how they end up forming a checkerboard pattern as they move quickly around the globe.

Can you get a “Laplace ringtone” for your smartphone? Not yet – these high frequency tones are out of our hearing range. But you can bet that Laplace would support the idea – especially if it helped him become known as the Newton of Smartphones.