The Bizarre Case of the Swedish Sleeping Beauty

Karolina Olsson was mostly a normal 14-year-old girl who lived a simple life with her family on the tiny island of Oknö, just off Sweden’s eastern coast in the Baltic Sea. Karolina, her mother, father, and five siblings lived a spartan life of farming and fishing in their little hamlet well away from the rest of the world, and it is very likely that she would have just faded into history as an unknown face if it were for a strange series of events that would put her into a 32-year slumber during which she would barely age and which has never been adequately explained. Here is the real story of the Sleeping Beauty of Oknö.

It began on one day in February of 1876, when Karolina was returning home and decided to cross a frozen river. She apparently slipped and hit her head pretty hard, with some reports even saying she fell through the ice to the frigid water below, but she was fine enough to get up and continue back to her family’s modest one room cottage. Her father examined her, and although she had some nicks and bruises, Karolina seemed to be fine at the time. However, in the coming days she would complain of intense headaches and a growing, relentless toothache that would not go away. Interestingly, the superstitious parents did not associate this with her fall, but rather the work of witchcraft, and seeing as they were in a remote area and too poor to afford any help, they merely sent her to bed while they figured out what to do. Yet strangely, the next morning they found that their daughter would not wake up, and indeed wouldn’t for decades. 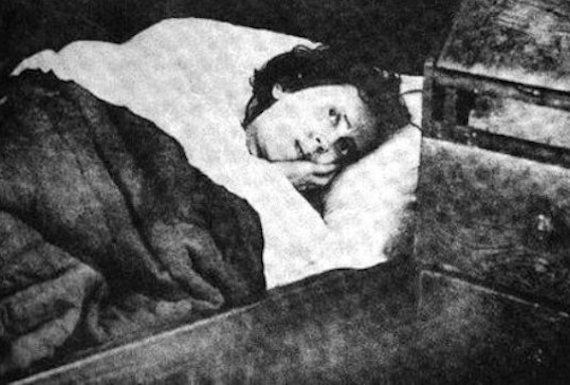 When Karolina couldn’t be roused, her desperate family resorted to various ways to try and get her to wake up, including poking her with needles or inserting them under her fingernails, and open flames against her skin, but none of this worked or provoked any reaction at all. In the meantime, as the days passed, they took to force feeding their daughter two glasses of milk and sugar a day, and when they finally had a doctor come look at her, he would tell them that she was in some sort of coma. although why was anyone's guess. The doctor kept up to date on the case, and as the months stretched into a year and the girl continued her slumber, he implored the medical community to try and figure out what was going on. Other doctors made their way out to the secluded island to see Karolina for themselves, and it was noted that her hair and fingernails seemed to have not grown during the entire episode, and that she had not really lost any weight despite subsisting on only a mere two glasses of milk a day. In fact, she was in surprisingly good shape, her muscles seemed to have not really atrophied at all. It was as if Karolina was in some sort of state of suspended animation.

In July of 1882, a full 6 years after she had gone into her mysterious sleep, Karolina was still sleeping away, and her concerned, burdened parents had her hospitalized in the city of Oskarshamn, where doctors tried to revive her with electro shock therapy to no avail. Frustrated doctors would throw up their hands and diagnose her with a severe neuropsychiatric disorder called “dementia paralytica,” also known as general paralysis of the insane or paralytic dementia, but no one could be sure, and it is unlikely that she actually suffered from this. The family was told there was not much to be done except wait and hope for the best. And so they waited, and waited some more. Years passed, seasons changed, the world evolved around them, family members passed away, and Karolina slept, occasionally moaning or tossing and turning, and even sleepwalking or mumbling in her sleep on occasion, but never fully waking up. The only time she ever showed any sort of true reaction to the outside world was when she was seen to cry when her brother passed away in 1907, yet she did this even as she remained in her strange comatose state.

Karolina’s mother would also die during this ordeal, and a full-time caregiver was hired to tend to her. This maid was baffled that Karolina’s hair always seemed to be clean and that it never grew, nor did her nails. She also noticed that sometimes when she left and came back pieces of candy she had brought with her would be missing, leading her to be suspicious of the whole thing. Yet, Karolina never would rouse from her sleep, no matter what anyone did. After years of this it was also rather odd that the woman did not seem to be aging normally, looking much younger than she should have, as if her whole metabolism had been slowed down. This would continue for 32 years, until one day she just suddenly woke up.

On April 3, 1908, Karolina suddenly and without warning sat up in bed and began crying. The maid entered the room expecting this to be just another sleepwalking episode, but was astonished to see that Karolina was alert, awake, and looking about the room in confusion. The family was immediately called to her bedside, but the young woman seemed to not recognize her now grown brothers, and was in a state of shock and panic. Over the next few days she did not say much, and showed an almost painful reaction to sunlight, but with some difficulty she began speaking again. Under questioning it was found that she had no memory of anything since falling into her long sleep except for half-remembered dreams and nightmares, and when doctors examined her they were puzzled that she seemed to have no negative side effects from being bedridden for decades, and that although she was technically now in her late 40s she looked more like she was in her early 20s. She was subjected to mental tests by psychiatrists and was found to have full possession of her cognitive abilities and intelligence, although she was having difficulty adjusting to the world that had changed so much around her.

The news got out about what the media was calling the Soverskan på Oknö, or "The Sleeper of Oknö," and Karolina was soon a minor celebrity. Of course, there were skeptics. After all, how could a woman remain asleep in bed for over three decades with no ill effects to show for it and having only subsisted on two glasses of sweetened milk per day? The idea was that her family had been in on it, and the whole perpetual sleep thing had been a ruse to keep her hidden away from the world. Another idea posited by the Swedish psychiatrist Harald Fröderström was that she had suffered some sort of deep psychosis state rather than a full hibernation, but that still didn’t explain why she looked so incredibly young. Karolina would end up leading a content and normal life right up to her death in 1950 at the age of 88, always insisting that it was all true and taking any secrets she had to the grave with her.

We are left to wonder, what happened to Karolina Olsson? Interestingly there have been other similar cases to hers, although not nearly as dramatic. In 2012 a 15-year-old British teen by the name of Stacey Comerford fell into a deep sleep that she would not wake from for 2 months. The cause was speculated to be a condition known as Kleine-Levin Syndrome, or Sleeping Beauty Syndrome, but it is still poorly understood. Was Olsson perhaps suffering from a particularly spectacular case of this? How do we explain her ability to come out of it without any significant mental or physical health effects or her lack of aging during the ordeal? We will probably never know, and the case of the Swedish Sleeping Beauty remains an unexplained historical oddity and possible medical marvel that we may never understand or have the answers for.