The Demon Baby of the Haunted Hull House

Sitting at 800 South Halstead Street, in the city of Chicago, Illinois, is the historic Hull House, built in 1856 by Charles J. Hull. At the time it was an upscale area of town, populated by the wealthy and upstanding, and the Hull family had a good life until Charles’ wife died and Hull moved away. The house remained and was passed on to other owners, but the surrounding area began to deteriorate in the aftermath of the great fire of Chicago Fire of 1871, which the house survived but which turned the area into a slum. The Hull house served for a time as a home for the elderly, during which time it was reported that the ghostly wife of Charles Hull still haunted this place, and indeed it would garner a reputation as one of the most haunted buildings in the city. Yet for all of these spooky stories, perhaps one of the weirdest tales surrounding the house began in 1913, when it was said to be the home of a child sired by the Devil himself.

At the time, the house was owned by two women by the names of Jane Addams and Ellen Starr, who had made it into a sort of a boarding house for struggling immigrants, and from which they launched various programs to improve the neighborhood and the citizens’ quality of life. The area had in fact turned into a complex of thirteen buildings, and included day nursery, gymnasium, dispensary, playground, and several boarding houses. It was by all accounts a very successful operation, and had made Addams a well-respected figure, but on one October evening in 1913 they would have an odd incident when a group of three Italian immigrants came to the door seeking out what they called “The Devil Baby.” Addams told them she did not know what they were talking about, but these three strangers were in a very excited, agitated state, and they insisted that they knew it was there, that they knew where it came from and what it looked like, weaving a bizarre tale as they did.

According to these women, the accursed child had been able to speak from birth, and had cloven hoofs, pointed ears, a tail, and horns. They explained how the evil child had been born to an atheist man who had married a pious woman, one day tearing the religious paintings from the wall and saying that he would rather have the Devil in his house than that imagery. He apparently got his wish, as his wife then gave birth to the demon child, and that child had spoken with the gruff voice of an old man and taken to tormenting his father and spewing profanity and obscenities. According to these women, the father had been unable to deal with it all and had dropped the Devil Baby off at the Hull House as an orphan, where it had supposedly been locked away on the attic, and now they had come to see it for themselves.

Addams and Starr denied that such a Devil baby had ever been brought to the house, and it took some doing to turn the women away, so convinced were they that the child was within those walls. When the strange women were finally gone, Addams did not get much of a chance for respite, as this would seem to have been only the beginning. Over the next several days more and more people started showing up at Hull House demanding to see the Devil Baby, until there was a constant stream of people from all walks of life and of all ages converging on the house to see the baby for themselves, some even offering to pay handsomely for the privilege. That Addams constantly turned them away and denied that such a child had ever been there made no difference at all, and the stream of people grew with each passing day, sometimes even including doctors or scientists who had come to examine the abomination. Addams began to think that this must have been some sort of misunderstanding, and would say of it all:

I suppose a deformed baby was born somewhere on the West Side. That to see the way otherwise intelligent people let themselves be carried away by the ridiculous story is simply astonishing. If I gave you the names of some professional people—including clergymen—who have asked about it you simply would not believe me. 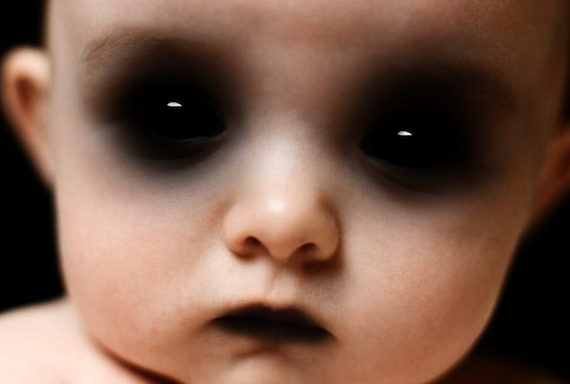 The crowds of people did not let up in the slightest, and this would go on for a full 6 weeks, with thousands of people making the journey, sometimes from all the way across the country, in order to see the now legendary Devil Baby. They came day and night, in such intense numbers that it was difficult to get any work done between turning these myriad curiosity seekers away. It was bizarre that such a story should spread so fast, and that no amount of denial could convince those who truly believed. It was astonishing to Addams, and she began to see it as a reflection of social problems that had manifested in myth building passed by word of mouth. Addams would write:

Although the visitors to the Devil Baby included people of every degree of prosperity and education, even physicians and trained nurses who assured us of their scientific interest, the story constantly demonstrated the power of an old wives’ tale among thousands of people in modern society who are living in a corner of their own, their vision fixed, their intelligence held by some iron chain of silent habit. To such primitive people the metaphor apparently is still the very ‘stuff of life’; or, rather, no other form of statement reaches them, and the tremendous tonnage of current writing for them has no existence.

Throughout six weeks, as I went about Hull-House, I would hear a voice at the telephone repeating for the hundredth time that day, ‘No, there is no such baby’; ‘No, we never had it here’; ‘No, he could n’t have seen it for fifty cents’; ‘We didn’t send it anywhere because we never had it’; ‘I don’t mean to say that your sister-in-law lied, but there must be some mistake’; ‘There is no sue getting up an excursion from Milwaukee, for there isn’t any Devil Baby at Hull-House’; We can’t give reduced rates because we are not exhibiting anything’; and so on and on. As I came near the front door, I would catch snatches of arguments that were often acrimonious: ‘Why do you let so many people believe it, if it isn’t here?’ ‘We have taken three lines of cares to come, and we have as much right to see it as anybody else’; ‘This is a pretty big place, of course you could hide it easy enough’; ‘What you saying that for—are you going to raise the price of admission?’ We had doubtless struck a case of what the psychologists call the ‘contagion of emotion,’ added to that ‘aesthetic sociability’ which impels any one of us to drag the entire household to the window when a procession comes into the street or a rainbow appears in the sky.

She would write much of the odd incident in later years, even submitting a report to the American Journal of Sociology, and would write a very detailed and contemplative article about it in the Atlantic Monthly, which you can read here. She would ponder it all at length in her writings, and would at one point write of it:

Many of them, who came to see the Devil Baby had been forced to face tragic experiences, the powers of brutality and horror had had full scope in their lives and for years they had had acquaintance with disaster and death. Some of these old women had struggled for weary years with poverty and much childbearing, had known what it was to be bullied and beaten by their husbands, neglected and ignored by their prosperous children, and burdened . . . .

During the weeks of excitement, it was the women who really seemed to have come into their own, and perhaps the most significant result of the incident was the reaction of the story upon them. It stirred their minds and memory as with a magic touch, it loosened their tongues and revealed the inner life and thoughts of those who are so often inarticulate. One result from the hypothetical visit of the Devil Baby to Hull-House will, I think, remains: a realization of the sifting and reconciling power inherent in Memory itself. At least, during the weeks when the Devil Baby seemed to occupy every room in Hull-House, one was conscious that all human vicissitudes are in the end melted down into reminiscence, and that a metaphorical statement of those profound experience which are implicit in human nature itself, however crude in form the story may be, has a singular power of healing the distracted spirit.

The whole fiasco would die down as suddenly as it started when newspapers began to pick it up and pick the story apart, and pretty soon no one else was coming to the Hull House looking for demon babies. Bizarrely, in later years the tale has sort of continued in a sense, with the house later renovated and reports of the ghostly wail of a baby coming from the walls. Although the boarding school closed down in 2012, it is now run as a museum that has become popular for ghost hunters looking to investigate its haunted past. What caused all of these people to suddenly lose their minds and converge upon this place? What was the real story behind the Devil Baby and what was behind all of this? Was this an urban legend, mass hysteria, or what? No one really knows, and it remains a strange historical oddity and anomaly we may never really truly understand.