When one imagines a “headless horseman, one is perhaps most likely to think of Washington Irving’s 1820 short story The Legend of Sleepy Hollow, but such entities are pervasive in a surprising amount of lore going back centuries. Celtic myths have the dulachan, or “dark man,” a fairy who rides around headless on a horse it whips with the spine of a human being, and many other cultures have their own variation of this general theme. And why not? The image of a headless rider galloping about on some mysterious agenda is a suitably creepy image that has a macabre allure. The U.S. state of Texas has its own frightening spin on this legend, which melds odd history with supernatural terror.

In the mid-1800s, the state of Texas was a lawless, forsaken place, a den of outlaws and murderers, as well as aggressive Native tribes out for blood, all of them prowling the desolate, dusty landscape of the wilds to ruthlessly prey on the unwary. Even more dangerous than the state as a whole was a swath of land sitting between the Rio Grande River and the Nueces River, which was an area disputed by the governments of the United States and Mexico. Since Mexico recognized the border as being the Nueces to the north, while America saw the border as being traditionally the Rio Grande river to the south, making the area into a sort of no-man’s land that attracted to it the very worst of the worst. Indeed, the area became so riddled with killers, bandits, cattle rustlers, and thugs, that the government had it patrolled by a group of hardened men called the Texas Rangers, composed of toughened vigilantes sometimes almost as violent as the men they hunted down.

Two of these rangers were a man named Creed Taylor, a veteran of the Texas War for Independence, and fellow war hero and folk legend William Alexander Anderson “Big Foot” Wallace, who owned their own ranches along just south of San Antonio. One of the villains haunting the area was a bandit and cattle rustler known as Vidal, and in 1850 he had his eye on the horses and cattle of several of the ranches along the Rio Grande and indeed all over south Texas. In daring raids, he managed to snag a good number of prized mustangs from some of these ranches, earning himself a “Dead or Alive” bounty on his head, but unbeknownst to him he had also stolen from both Taylor and Wallace, who had been off fighting a Comanche raid and so had not been able to defend against the bandit. Unfortunately for Vidal, these were two hard men who would not take kindly to outlaws stealing their horses and were trained to hunt down just the sort of scum who had done it, and this is exactly what they set out to do.

The two rangers were well aware of who Vidal was, and had no illusions that their horses had been stolen by anyone other than the nearly legendary horse rustler, and so they gathered up a posse to go out for a little frontier justice. The trail led them out over a desolate, forbidding moonscape of wilderness with banditos and Comanche warriors lurking everywhere and danger always around the corner, but the skilled trackers were able to manage to find Vidal’s camp in short order. After an intense exchange of gunfire, Vidal and his henchmen were shot down in a rain of bullets, but Taylor and Wallace were not done yet, and this is where the grim legend of the headless horseman would have its origins.

Wanting to make a bold and bloody statement to other bandits who would raid ranches in the no-man’s land, Taylor and Wallace went about chopping Vidal’s head off and strapping his headless corpse tightly to his horse. When the macabre deed was done, it appeared as if Vidal was riding his mount minus a head, and satisfied that it was a chilling enough warning to other outlaws, the two rangers sent the horse out into the wilderness with is morbid, ghoulish passenger on its back. It did not take long at all for frightened ranchers and travelers to start reporting the “phantom” headless rider, whose appearance only got more horrific as decay and the elements did their work on the corpse, and Vidal in death gained the name El Muerto, “The Dead One.” He was variously seen as being an omen of disaster or death, a harbinger of misfortune, and even a demon, sometimes described with flourishes such as that the horse shot fire from its nostrils or lightning from its hooves, and the rumors spread far and wide. 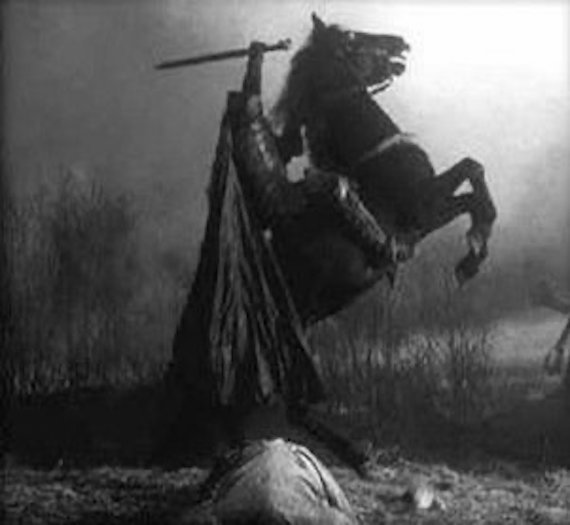 El Muerto would be sporadically sighted wandering about the wilderness for years before one day when, according to the tale, the horse either died of natural causes or was killed by ranchers near a watering hole. The by now desiccated, skeletal corpse was then pried from its bindings and unceremoniously buried in an unmarked grave at Rancho La Trinidad, near present Ben Bolt in Jim Wells County. One would think that would have been the end of El Muerto, yet although he was no longer a physical presence, the legend was far from over. People now began seeing a ghostly phantom horse with Vidal still headless and riding atop it, sometimes heard to scream out “It is mine. It is all mine!” as he rides past, often vanishing into thin air. The phantom El Muerto has supposedly been seen all the way up to the present day, most commonly in Duval, Jim Wells, and Live Oak counties, and there is even a place called Headless Horseman Hill, said to be one of the specter’s favorite haunts.

Is this just a spooky campfire story and urban legend, or is there anything more to it? It is known that Creed Taylor and Bigfoot Wallace were real historical figures, but it is unknown if they really killed and beheaded a bandit to send his corpse careening through the wilds without a head. It also isn't exactly clear how much veracity the reports over the years of a ghostly decapitated rider have been, whether they are real or just a propagation of the legend and myth. Whatever the case may be, it is a suitably spooky tale that manages to meld real history with a paranormal chill, and although we may never have answers, it will probably still do the rounds for some time to come.

Asteroid Passing Soon Between Earth and Moon — Why Not Try to Deflect It?